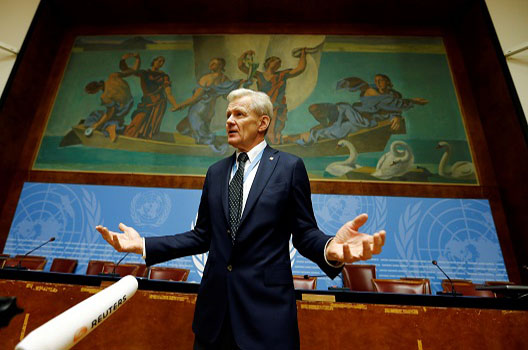 The defeat of the last Islamic State (ISIS) stronghold in Syria concomitant with the sudden US announcement of troops withdrawal from the northeast; leaves Europe in a tight spot. In recent years, EU governments have spent billions to mitigate the repercussions of the refugee wave resulting from the Syrian war while working towards normalization with the regime on a fair transition process.

However, with recent developments, this leaves the European community with few savory options due to its American ally’s fickle Syrian policies, the Russian preference for frozen conflicts, and member states demanding a form of normalization toward the regime.

The EU’s strategy toward Syria is represented through political and financial policies underpinned by several principles such as the belief of a fair political transition in line with the UNSCR 2254, and 2012 Geneva Communiqué.

At the political level, the EU insists on the promotion of democracy by strengthening Syrian civil society organizations and more importantly on insuring the accountability for war crimes, facilitating a national reconciliation process, and transitional justice. Finally, the EU continues to sanction 259 Syrians and sixty-seven entities with a targeted travel ban and  freezing of assets.

At the financial level, the EU and its member states earmarked over €10.8 billion in humanitarian, development, economic, and stabilization assistance since 2011. According to the European Council of the European Union (EEAS), it provided €1.65 billion in life-saving humanitarian aid to those in need in Syria and beyond. In addition, the EU mobilized over €3.4 billion in non-humanitarian aid such as macro-financial assistance for refugee communities; among others. The EU also hosted the Brussels conference on supporting Syria and the region in 2017 and in 2018; co-chaired by the UN. While the conferences secured more aid, it failed to advance the peace process; allowing Assad to gain further legitimacy through military victories.

The EU seems to be sticking to its strategy for now. According to an official working on EU foreign policy, normalization with Syria remains tied to a political transition. “Reconstruction will not happen in the current framework, without real transitional justice and resolution of the issue of refugees,“ says the official. The EU does not want to reward the regime with reconstruction money, which will naturally be geared toward rebuilding and bolstering the regime’s powerbase while punishing opposition groups and rewarding loyalists.

For Francesca Fabbri, policy analyst at the European Policy Center, the EU remains at a standstill. The official also believes “there might be a change in policy at the UN level, with the new envoy.” Geir Pedersen replaced UN envoy Staffan De Mistura; accused by some of legitimizing Russian diplomatic efforts on Syria when Russia led the Astana talks in 2016 that De Mistura attended. It thereby gave the talks international credibility with his presence and ended up sidelining the UN-led peace process.

Yet, undeniably the US withdrawal has changed the balance of power in Syria and will negatively impact the future of negotiations. The US presence was perceived as a deterrent to the regime, and provided Washington with some leverage with the political process. An unconditional withdrawal means that the US will lose any leverage it gained and enable both Iran and Assad; in addition to contradicting previous US officials’ statements on Syria.

US Special Representative for Syria Engagement, Ambassador James Jeffrey, the new American envoy previously defined main objectives of the Syria policy as focused on de-escalation, empowerment of the political process, and the enduring defeat of ISIS as well as the exclusion of Iran. Jeffrey also recently called for an end to the Astana process if the constitutional committee was not formed. The BBC recently reported that Turkey, Iran, and Russia failed to agree on the constitutional committee in Geneva.

With the US giving up what little leverage it had, the EU is left with little margin to maneuver because of the lack of leadership on Syria. “The EU is strategically absent from the Syrian conflict,“ says Steven Blockmans, head of EU foreign policy at Center for European Studies.

With the regime of Syrian President Bashar al-Assad now able to act with a free hand in the northeast, the de-escalation deal with Turkey could come into question.

The EU relied on the deal brokered with Turkey and Russia over Idlib which allowed for the de-escalation in the province; home to over three million people. It set up a buffer zone running 20 km deep into rebel territory that initially required the removal heavy weapons and jihadists.

Europe wants to avoid at all costs a new wave of refugees to their borders, a sentiment that has resulted in deep divisions within the Union and resulted in populist movements that have torn apart the Union and put pressure on Brussels.

“There is a shift in European policy with the awareness that the EU won’t be able to avoid contributing to the Syrian reconstruction [completely],” says Blockmans. While the EU has said it will not do so, it might be tempted to offer early recovery funding without a peace deal; especially if the regime decides to apply pressure by jumpstarting military operations in Idlib.

The vote on the renewal of EU sanctions against the regime is expected in June 2019. It remains to be seen if member states will decide to renew or not, or whether the EU will push for any significant policies given its member states struggle with fatigue concerning Syria.

Mona Alami is a nonresident senior fellow at the Atlantic Council’s Rafik Hariri Center for the Middle East.