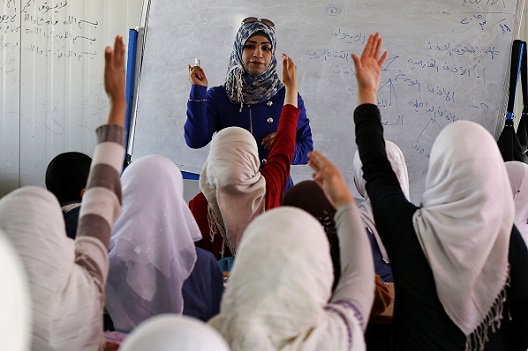 Women in Deir Ezzor have supported the Syrian revolution in various ways since its beginning. During the early stages of the revolution, women held active roles, including those that were viewed as exclusively male dominated, such as carrying weapons in the armed opposition. Despite the seizure of most of the province by the Islamic State (ISIS or ISIL), women in Deir Ezzor remain actively supportive of the local population and are working to protect other women.

In March 2011, the first demonstrations calling for the Syrian regime’s ouster took place in Deir Ezzor. Women started to join the protests alongside men early on. By the summer, women had a significant presence in the protests.

In August 2011, the Assad regime’s army invaded Deir Ezzor. The regime—by working with paramilitary groups (Shabiha), arresting civilians, and increasing the number of checkpoints—managed to temporarily stop major protests and sit-ins. During that period, Randa al-Saleh was attending the Girls’ First School for Female Students. She said, “When men resumed protesting, women could not stand aside idly and simply watch them get shot and arrested, so we joined the demonstrations sacrificed alongside them. Women also staged their own protests inside schools and universities, including the protests that took place at the Girls’ First School (at the beginning of April 2011).’’

In June 2012, the armed opposition entered Deir Ezzor and prevented regime forces from accessing the city. Raweya al-Kheidr, a nurse who worked in field hospitals, described the difficulties of working at that time. “When the armed revolution started in Deir Ezzor and the opposition brigades took over the city’s central neighborhoods, the regime tried to retake the city but failed. Without warning, it started brutally bombarding those neighborhoods. The attacks forced the residents to leave their homes and migrate to other cities. Work then became limited to carrying weapons to fight the regime or working in field hospitals. Because of that, women’s presence was limited. However, some women carried weapons briefly during the Republican Guards’ campaign to stop the protests. One well known woman was a nurse known as Um al-Thuwar (Mother of the Protesters), because the youth of the Free Syrian Army (FSA) considered her their mother.’’

In January 2013, after the regime siege had lasted several months, the armed opposition freed the Huweqa neighborhood’s eastern entrance and used it to transfer supplies in and out of the city. This marked the end of the siege and the beginning of what the city’s residents call the “period of freedom.” This period lasted until ISIS seized most of the city. During that period, many locals returned despite the regime’s bombing of the city.

When civilians returned to the city, many students were not attending school. Batul, one of the teachers, discussed the formation of an education office in April 2013. “It was in charge of opening and administrating schools in the freed areas for the students, and then overseeing their education. Female teachers in Deir Ezzor did not just stand by as spectators, we joined the office and participated in establishing it. Soon thereafter, women outnumbered men in the office. After an academic year, we had to place the office under the local (city) council’s authority, which reformed it before the start of the second school year. There were more female teachers than male teachers in the schools, which showed the women’s readiness to work even during air raids—which do not differentiate between schools and an FSA headquarters.”

During this period, women had the freedom to work in other fields as well. For example, the rights organization al-Mar’a wa al-Tifl Hayat was established in June 2013 in Deir Ezzor’s al-Ummal neighborhood. Baida’a al-Hassan, the organization’s director, explained during an interview in Urfa, Turkey, “Our activities focused on raising awareness of women’s rights. We held seminars in our center and visited women in their homes. The organization also started two training centers. At the first we taught sewing and at the second, called Ahla Talla, we taught hairstyling. The purpose behind these centers was to teach uneducated women professions so that they would be able to support themselves. Additionally, the organization established the Shaady Rabbah School in al-Hamediya area and the al-Amal Kindergarten in al-Ummal. Through these two schools, we managed to secure jobs for many unmarried women.”

Al-Hassan also mentioned the dangers women involved with al-Mar’a wa al-Tifl Hayat faced in their work, including bombing by the Assad regime. The bombing killed two young women who used work for the organization at the schools.

Many other women-run organizations were established, some of which are still operating even now under ISIS, albeit secretly and in a limited fashion. Heba, the director of one such organization, spoke about her organization on the condition that neither the name of the organization nor its location be mentioned. Heba said, “On July 14, 2014, ISIS seized a neighborhood in Deir Ezzor city, and shut down all the civil society organizations, including ours, and confiscated our organization’s equipment. We stopped operating for two months. However, the extremist group and its horrible treatment of civilians would not stop us from working. We decided to go back to our activities, but with a new approach. We used to hold public seminars, but today we hold them secretly inside homes with a limited number of attendees. We cannot assemble large groups of women because the whole operation might get discovered.”

Heba emphasized that one of most important issues discussed during these seminars is how women can change their behavior to protect themselves from ISIS. Another topic is how to turn away an ISIS “suitor” if he proposes to a woman. That matter has been, and still is, a danger to women of Deir Ezzor.

Yasmine, who is twenty years old, spoke about how she avoided becoming a wife to an ISIS fighter. “The laws that ISIS imposes on us, including the niqab (full face veil) and other laws, are hard on us. But what if a member of the extremist group asks for a girl’s hand in marriage? How do we get out of this disaster? Can we tell them that our daughter wishes to finish her studies and does not want to marry right now? Or can we say that we do not let our daughters marry criminals? In October 2014 a member of the extremist group asked my father for my hand in marriage. My father could not refuse him outright. Instead he told him that his daughter was engaged to her cousin. In fact, after two weeks I did marry my cousin, out of fear that other ISIS members propose to me. However, I never regretted marrying my cousin. The young men in our city are supportive of us and they refuse to let us be harmed.”

Fikram is a civil activist from Deir Ezzor. He worked as a paramedic on the battle fronts, in the media with Alwan Team, with the human rights organization SAMA, and writes for Good Morning Syria.

Image: (Photo: Reuters. Mafraq, Jordan. Syrian refugee children raise their hands as they attend class in a UNICEF school at the Al Zaatari refugee camp in the Jordanian city of Mafraq, near the border with Syria March 11, 2015. Nearly four million people have fled Syria since 2011, when anti-government protests turned into a violent civil war. Jordan says it is sheltering around 1.3 million refugees. REUTERS/Muhammad Hamed)