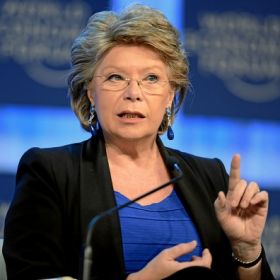 On October 29, Viviane Reding, vice president of the European Commission, was the keynote speaker at “Towards a More Dynamic Transatlantic Area of Growth and Investment,” an event at the Johns Hopkins SAIS Center for Transatlantic Relations in Washington. Her speech comes at a time where the transatlantic community is both increasingly cooperative and marred with controversies. As Commissioner Reding flatly stated, “Friends do not spy on each other, and that’s why I’m here.”

It seems as if the TTIP negotiations have consistently had a dark cloud hanging over them. During the first round of negotiations, the revelation of widespread NSA spying hit major news sources. Many called for trade negotiations to be halted until the US stopped, or at least explained, its behavior. The second round of negotiations was completely shelved due to the US government shutdown. Now the US faces allegations that it tapped Angela Merkel’s (and other European leaders’) personal phone. Fortunately, TTIP carries on despite the numerous misfortunes.  While “it has shaken and damaged our relationship,” Commissioner Reding assures us, “our partnership has not fallen from the sky.”

Commissioner Reding’s point is clear: partnerships are built on respect and trust. Currently EU member-states “are not seen as partners, [they] are seen as threats.” Data security and the divergence of privacy rights across the Atlantic are focal points for TTIP negotiations.  Simply put, “data protection is not red tape; it is a fundamental right that is not negotiable.” Commissioner Reding is scheduled to meet with the Congressional Caucus on Data Privacy and check in on the progress of the Consumer Privacy Bill of Rights. If we expect a deeper transatlantic relationship, there needs to be a foundation of standardized data privacy laws on each side.

Commissioner Reding went on to reinforce the importance of TTIP and the transatlantic relationship. More than €2 billion in goods and services cross the Atlantic each day. In tough economic times, markets need to be more efficient. That is no secret. Commissioner Reding stands by TTIP because promoting trade boosts economies without burdening government budgets. If we can rebuild transatlantic trust while destroying divergent regulations, “TTIP will take our relationship to new heights.”