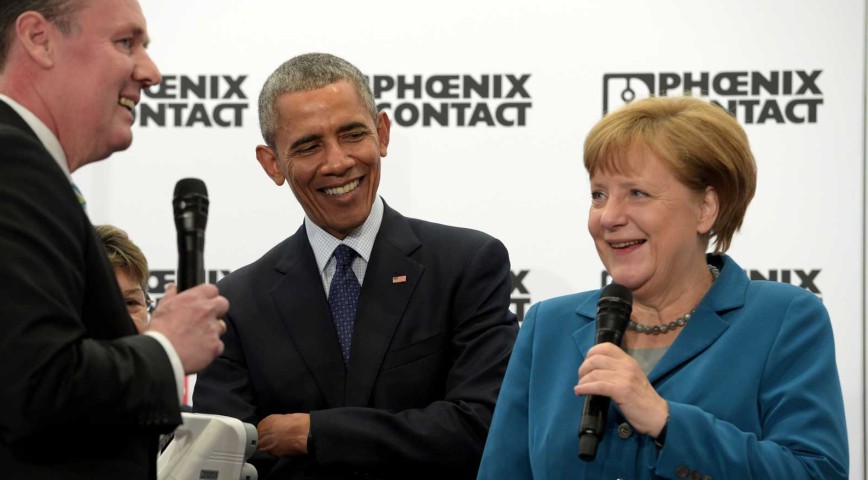 President Obama gave the opening speech for the Hannover Messe Trade Fair earlier this week.  The next morning, he gave joint remarks with Chancellor Merkel about the US-German trade relationship  before touring the event.

Earlier today, the European Commission published a report, titled TTIP – State of Play, providing information on the status of each individual topic of the agreement as well as an overview of the sticking points of the remaining chapters to be discussed. The report finds that despite good progress in many TTIP chapters, significant strides have to be made in some areas if we are to have the main elements of a deal finished this year. (European Commission)

Find a blog entry assessing the state of play by Commissioner Malmström here. The Commissioner also gave a very interesting interview on her views of TTIP and trade policy. (Interview in German)

Do you like staying up to date on transatlantic trade issues?  Have TTIP & Trade in Action emailed to you weekly!

“The time to complete T-TIP is now, and I’m here to say that the United States is prepared to make every effort to reach an ambitious, comprehensive, and high-standard agreement this year […] I call on leaders across Europe to join me and Chancellor Merkel in doing the same.  That’s how we can sustain the progress that began here in Hannover nearly 70 years ago.” – President Barack Obama

US President Barack Obama gave the opening remarks at the Hannover Messe industrial fair, voicing his strong support for TTIP. He spoke about the the history of US-German economic relations from the Marshall Plan until 2015, the year that the United States became Germany’s largest trading partner. With regards to TTIP, he stressed that in times of uncertainty the answer is not to “pull up the drawbridge and stop trade,” but to strengthen trade and demonstrate to the world the importance of the shared values between the United States and Germany. (The White House)

“We want to learn from each other.  We want to get closer to each other, because we both want to shape innovation.  We want to be forward-looking in this world of tomorrow.“ – Chancellor Angela Merkel

President Obama and Chancellor Merkel gave brief remarks the morning of the first  day of the Hannover Messe on April 25, addressing the level of quality and innovation of their respective economies. They stressed that both nations should seize the opportunity to learn from each other and continue to cooperate to influence the future of the global economy. (The White House)

Later in the day President Obama addressed the people of Europe in which he stressed the importance of the transatlantic alliance and how TTIP can only strengthen it.

What’s a Good TTIP for the Mechanical Engineering Sector?

“The second pillar of TTIP is the most important for your sector: regulatory issues. By coming closer together the EU and the US would be cutting costs, without cutting corners.” – European Trade Commissioner Cecilia Malmström

During her visit of the Hannover Messe, European Trade Commissioner Cecilia Malmström gave a speechto representatives of the German Mechanical Engineering Industry (VDMA) that highlighted the benefits of TTIP to their industry, which has been one of the most vocally supportive of the agreement in Europe. She stressed that many current regulatory distinctions in this sector often have no bearing on safety or environmental protection but are in many cases the classic kind of regulatory differences that have arisen simply because regulators made different choices in isolation.  (European Commission)

Obama ‘Confident’ on TTIP as Clock Runs Down

Earlier this week, President Barack Obama he was “confident” that an agreement on TTIP could be reached by the end of this year, as Washington and Berlin redoubled efforts to close negotiations before he leaves office. “I am confident that we’re going to be able to get this done,” Obama said in a news conference in Hanover with German Chancellor Angela Merkel. “I don’t anticipate that we will complete ratification by the end of the year, but I do anticipate that we can have completed the agreement”. (Politico)

US Official: Reason for Optimism on TTIP

US Ambassador to Germany, John Emerson, had an interview with Handelsblatt in which he conveyed a feeling of optimism about the possibility of concluding TTIP negotiations during the Obama administration, stressing, “I’m more optimistic now than I was six months ago.  If I’m talking to to Mike Froman, our trade rep, he says that he and Cecilia Malmstrom have had a couple of very good meetings recently.” (Handelsblatt)

On April 25, the US Chamber of Commerce and the Federation of German Industries (BDI) hosted a bilateral US-German Business Summit at Hannover Messe to look at the future of the transatlantic relationship. US Chamber President and CEO Tom Donohue and BDI President Ulrich Grillo presented US Commerce Secretary Penny Pritzker, US Trade Representative Michael Froman, and European Commissioner for Trade Cecilia Malmström with a joint declaration in support of the TTIP negotiations. (US Chamber of Commerce)

Would you like to hear how you can partner with the Atlantic Council and our trade work? Click hereand learn more!

TTIP: Benefits and Challenges of an Agreement Fit for the 21st Century

The European Union Delegation to the United States released a fact sheet this week, titled The TTIP: Benefits and Challenges of Agreement Fit for the 21st Century, which overviews the opportunities and outstanding challenges of TTIP negotiations. The publication makes the case that TTIP would be the least expensive way to stimulate the economies on both sides of the Atlantic and send a signal to the world that they can continue to lead with open and well-regulated markets. (European Union in the United States)

This week the George Washington University Regulatory Studies Center released a report analyzing the opportunities to improve transatlantic regulatory cooperation, i.e. within TTIP. The report identifies areas of opportunity that can help reduce incompatible approaches and unnecessary costs while indicating areas where regulatory divergences could persist due to jurisdictional judgments of national sovereignty and structural differences between countries. (George Washington University)

TTIP Under Pressure in Germany and the USA

The Bertelsmann Stiftung polled US and German residents on the topics of free trade and the TTIP and found that pressure on the concept of free trade is growing in the export nation of Germany. In Germany, support for TTIP has fallen significantly in the last 18 months, as did their general support for free trade. The majority of Americans are staunchly pro free trade, but feel too uninformed about TTIP to support or oppose it. Aart De Geus, Chairman and CEO of the Bertelsmann Stiftung on the German results: “Support for trade agreements is fading in a country, that views itself as the global export champion. Trade is a key driver of the German economy. If it weakens, Germany’s economic power as well as its labor market could falter.” (Bertelsmann Stiftung)

This week, the US Department of Commerce published a report explaining the benefits American businesses will gain once the TPP is ratified.  The report analyzes how trade relationships will change country-by-country and sector-by-sector, whether it be greater market access in some places or harmonized regulations in others. (United States Department of Commerce)

US Chamber of Commerce President Tom Donohue weighed in on the prospects of the two trade deals the United States is currently negotiating.  Although it is generally considered that TTIP will not be voted on during the Obama administration, Donohue stresses that is still important that negotiations are concluded. On the other hand, Donohue believes the TPP will pass through the House of Representatives with bipartisan support, but will face an uphill battle from a lame-duck Senate session. (The Hill)

Trans-Pacific Partnership: New Opportunities for US Agriculture in Vietnam

The US Department of Agriculture this week released a fact sheet and infographic highlighting the benefits TPP ratification would have for American businesses conducting business with Vietnam, which is already one of the fastest growing destinations for US food and agriculture exports. In addition, Vietnam is a member of ASEAN and is negotiating agreements with China, the European Union, Hong Kong, and Israel, making TPP ratification with America all the more important. (United States Department of Agriculture)

Barack Obama: As Your Friend, Let Me Say That the EU Makes Britain Even Greater

Just prior to his visit to the United Kingdom this week, US President Barack Obama published an open letter in The Telegraph, making his case for the United Kingdom remaining within the European Union.“When it comes to creating jobs, trade, and economic growth in line with our values, the UK has benefited from its membership in the EU – inside a single market that provides enormous opportunities for the British people. And the Transatlantic Trade and Investment Partnership with the EU will advance our values and our interests, and establish the high-standard, pro-worker rules for trade and commerce in the 21st century economy.” (The Telegraph)

Obama on a Post-Brexit Trade Deal with the United Kingdom

During his visit to London, President Barack Obama gave an interview with BBC News in which he made it clear that the United Kingdom would not be able to easily negotiate a new trade with the United States if it were to leave the European Union. He said, “It could be five years from now, 10 years from now before we’re actually able to get something done… We wouldn’t abandon our efforts to negotiate a trade deal with our largest trading partner, the European market.” (Reuters)

Also this week, US Trade Representative Michael Froman had an exclusive interview with Handelsblattabout “everything trade”.  In regards to Brexit, he reiterated President Obama’s stance. (Handelsblatt)

Speech: The WTO after Nairobi – What’s the Way Ahead?

European Trade Commissioner Cecilia Malmström participated in a meeting of the DG Trade Civil Society Dialogue, seeking input from other members about their thoughts on how and where to move forward within the WTO framework. Malmström laid out the areas where there is interest from other WTO members that have a greater chance of moving forward, namely, agriculture, digital trade, and investment. (European Commission)

The full speech can be found here.

This week, Canada’s Minister of International Trade, Chrystia Freeland, and European Trade Commissioner Malmström gave a joint statement about the CETA agreement at their meeting in Brussels. “Our top priority is to sign CETA this year and see it enter into force in 2017. CETA will bring tremendous benefits to both of our economies and stands to increase Canada-EU bilateral exports of goods and services by 23 percent, or $38 billion, annually.” (Global Affairs Canada)

Trans-Pacific Partnership Agreement Briefing – May 17, hosted by the Canberra Chamber and Australian Capital Territory Government, and the Australian Department of Foreign Affairs and Trade, in Canberra, Australia – More Information
The End of Trade as We Know It? – May 5 & 6, hosted by George Washington University and The World Bank, in Washington, DC – More Information
Opportunities and Potential of TTIP – May 30, hosted by the Bavarian Industry Association (vbw), in Bad Staffelstein, Germany – More Information
The 13th round of TTIP negotiatons are currently underway in New York.
There will be a press conference at the conclusion of the round on Friday – European Commission
Please send us suggested news stories, opinion pieces, publications, and upcoming events that you would like us to highlight!
Email [email protected] with your ideas and suggestions.
This website or its third-party tools use cookies, which are necessary for its functioning and required to achieve the purposes illustrated in the cookie policy.