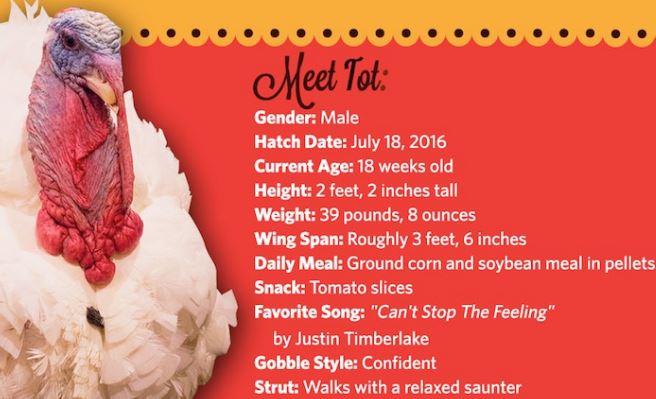 Happy Thanksgiving from the TTIP&TRADE in Action newsletter team!
Thanksgiving Turkey Fun Facts:
-Americans will consume 46 million turkeys tomorrow ($610 million worth)
-Neil Armstrong and Buzz Aldrin’s first meal on the moon was turkey
-Every year, the US president pardons two Turkeys, and one is voted as the National Thanksgiving Turkey

Will the US elections have an impact on holiday cheer and consumer spending this holiday season? Apparently not, according to a report by Consumers’ Research.

What are US shoppers buying this year? And where do these products come from?

The top 6 products to be purchased this year on Black Friday  are: Pokemon Sun and Moon, Barbie, Oculus, Playstation Virtual Reality, iPhone7, and Legos. Check out the map below to see where these products are manufactured around the world. These products are just some of many examples that clearly show how interconnected the global market is and how important trade is for the US consumer.

“When it comes to trade, I believe that the answer is not to pull back or try to erect barriers to trade. Given our integrated economies and global supply chains, that would hurt us all. But rather the answer is to do trade right…”

While attending the 24th Asia-Pacific Economic Cooperation Economic Leaders’ Meeting in Peru this past weekend, US President Barack Obama addressed the broader debate that is occurring on globalization and trade. US President Obama argues that combating the negative impacts of trade requires strong labor standards, strong environmental standards, and addressing how workers and ordinary people can benefit from trade. (White House)
The APEC Leaders’ Declaration also addresses the importance of free trade.

UK Believes in Free Trade, Too
“I want to ask you to work with me to show that the forces of capitalism, globalisation and free trade offer the best hope for the problems facing so many people in our country. I want you to help me show those who feel let down, left behind or marginalised that we can respond. We can change.”

During the CBI Annual Conference on Monday, UK Prime Minister Theresa May emphasized the importance of free trade and globalization for the United Kingdom’s economy. While UK Prime Minister May understands that some individuals have not benefited from trade, she offers that by “working together – we can seize that opportunity and deliver the change that people want.” (UK Government)

Merkel Urges Nations to Solve Global Challenges
Addressing the German Parliament on Wednesday, German Chancellor Angela Merkel called for nations to take a multilateral approach to solving global problems. She said “I am not happy that the trans-Pacific agreement now will probably not become reality. I don’t know who will benefit from this step.” She further emphasized “I know only one thing: there will be other trade agreements, and they won’t have the standards that this agreement and the hoped-for TTIP agreement have.” –Translated from German- (Die Bundeskanzlerin)
How the Export-Import Bank Can Survive a Trump Presidency
The US Export-Import Bank is currently working under capacity and is therefore, unable to extend loans of more than $10 million. As a result, Export-Import Bank supporters are hoping to change the bank’s quorum’s rules during the lame-duck session. (Politico – Morning Trade)
For more details on the Export-Import Bank’s quorum rules and the issues they have been facing, take a look at this article from The National Review.

TTIP is on Life Support, Not Dead
In this video discussion with Vice President and Director of the Atlantic Council’s Future Europe Initiative Fran Burwell and myself, I argue that a fundamental fear of globalization is the greatest threat to the success of the TTIP. While Ms. Burwell said TTIP is not dead, merely “on life support,” she asserted the importance of the deal for the US economy, describing how not only large companies, but especially small-to-medium enterprises can benefit from free trade. (Atlantic Council)
Watch the full live video discussion on the topic here.

Mr. Trump, Don’t Pull Out of the TPP
Atlantic Council’s Ashish Kumar Sen spoke with the Director of the Atlantic Council’s Latin America Economic Growth Initiative Jason Marczak and Atlantic Council Resident Senior Fellow Robert A. Manning, to discuss why the United States should not withdraw from the TPP. If the United States were to withdraw from TPP, it would undermine their credibility and open the door for China to set rules on global trade. (New Atlanticist)
Further Reading: TPP Is Not Dead by Alan Oxley
APEC Leaders Vow to Fight Protectionism
Asia-Pacific leaders vowed on Sunday to fight protectionism and Chinese officials said more countries are looking to join a China-led trading bloc after Donald Trump’s election victory raised fears the United States would scrap free trade deals. Despite these fears, the APEC leaders indicated it was too soon to say TPP was off the table. (EurActiv)
Is TPP’s Loss RCEP’s Gain?
The uncertain future of TPP cast a shadow on the APEC Summit this past weekend. In light of this, China is now pushing its less ambitious trade deal, RCEP, more than ever. So far, Asian nations have not officially joined the RCEP. (Nikkei Asian Review)
The latest from President-elect Trump on TPP: Earlier this week, Mr. Trump released a youtube video vowing to withdraw the United States from the TPP in January.
Globalization
G20 as a Chance to Shape Globalization in a Humane Way
In her address to the German Parliament earlier on Wednesday, German Chancellor Merkel talked about the priorities of the German Presidency of the G20 on December 1. More specifically, she sees it as a “chance to shape globalization in a humane way.” In this light, Merkel announced that Africa will be a focus of the German G20 strategy, because she thinks that to date, it is the continent most disconnected from global economic development. As a country that is known for its positive experience with the social market economy, it should make a strong case for basing globalization on “similarities, multilateralism, and common action.” (Die Bundeskanzlerin)
Politicians are Failing Losers of Globalization
The incoming head of the United Nations, Mr. Antonio Guterres warned on Tuesday that “losers of globalization” in rich countries have felt ignored by establishment politicians, prompting them to turn to nationalist agendas, as in the US election and Brexit referendum. This feeling of being ignored led to what Guterres called “a kind of evolution” in which anti-establishment parties now tend to attract majorities against whatever was put to a vote. (Reuters)
What Caused the Turn to Protectionism?
Nonresident Senior Fellow at the Peterson Institute for International Economics Cullen S. Hendrix seeks to explain why the United States has taken a turn toward protectionism. Hendrix claims that, at the root, the turn toward protectionism is the result of a disconnect between the US’ rising trade exposure and a failure to adopt the social expenditure policies that have accompanied open markets in other advanced economies. (Peterson Institute of International Economics)
Time to Fight Back for Globalization
What does the American turn inwards mean for the rest of the world? According to the Financial Times, two possibilities exist. The turn inwards could cause more protectionism in other countries, or it could galvanize others to fights harder for the continued lowering of national barriers. (Financial Times)
Globalization: We Are at a Fork in the Road
Resistance is growing in industrialized countries to the problems caused by globalization and free trade. Populists have promised relief by erecting new barriers to unhindered trade. But that is a dangerous path. The world must not turn its back on globalization, it must try to eliminate the drawbacks of globalization without destroying its advantages. (Spiegel)

Will the Banks Leave London?
With the uncertainty caused by Brexit, US banks based in London – Goldman Sachs, JP Morgan, Morgan Stanley and Citigroup – are struggling with the issue of whether to stay in London or to move their EU headquarters. These banks do not want to leave so they can get a good deal in Brexit negotiations, but the banks are preparing for a move, if needed. Specifically, the banks are increasing their technology and infrastructure in their offices across the European Union. (Politico)
EU-Ecuador Trade Agreement Signed, Benefits to Follow
Ecuador has joined the trade deal between the European Union, Colombia, and Peru after years of negotiations. Ecuadorian Vice President Jorge Glas insists that the trade agreement recently signed with the EU will generate plenty of opportunities and underpin the changes his country has been working toward in recent years. (EurActiv)
Spain Wants More Bank and Trade Support, Less Fiscal Stimulus
Economy Minister of Spain Luis de Guindos is urging the European Union to place more emphasis on boosting trade and fixing ailing banks to spur economic growth, rather than relying heavily on fiscal stimulus. Spain’s main focus for its own economic growth is to reduce its fiscal deficit which is currently 3.6% of GDP – .5% higher than the amount agreed upon with Brussels. (Financial Times)