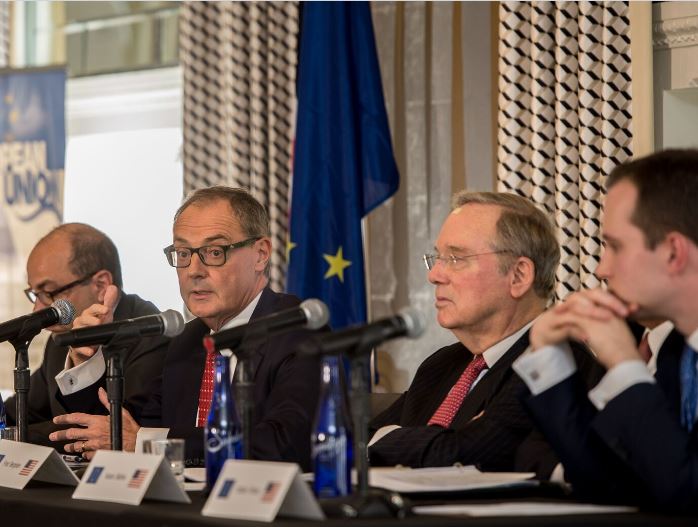 President- Elect Trump and Europe : Want to learn more about EU-US Relations and Challenges for the Next US Administration? Check out this video of an event hosted by the EU delegation.

After the Italian Constitutional Referendum

After the Italian Referendum
Italian PM Matteo Renzi announced his resignation after a clear defeat in the referendum on constitutional change last Sunday. Responding to this and more on what the “no” vote means — watch our live interview with expert Andrea Montanino, Director of the Atlantic Council’s Global Business and Economics Program.

Open Markets: Bank of England Governor Mark Carney, Monday December 5 at Roscoe Lecture, Liverpool John Moores University
“Turning our backs on open markets would be a tragedy, but it is a possibility. It can only be averted by confronting the underlying reasons for this risk upfront.”
Brexit Corner: EU’s Chief Brexit Negotiator Michel Barnier, Tuesday December 6 at the European Commission (Press Briefing)
“Unity is the strength of the European Union and President Juncker and I are determined to preserve the unity and the interest of the EU27 in the Brexit negotiations. This determination is shared by all governments.”
The recording of Barnier’s speech can be found here.
Food for Thought: EU Farming and the Global Opportunity (EU Trade Commissioner Cecilia Malmström)
“Trade isn’t just about exports. By making imports easier, we can ensure consumers enjoy more choice and better prices on their store shelves. Of course, in any case, European standards continue to apply to any food sold in Europe, wherever it’s from.” (European Commission)

On Tuesday, I interviewed Ambassador Anthony Gardner and Ambassador David O’Sullivan live and asked them where Europe and United States can best cooperate on economic prosperity. (Atlantic Council)
Want to Rev Up the Economy? Don’t Worry About the Trade Deficit
Harvard professor of economics N. Gregory Mankiw explains why the fear over the trade deficit of the United States is incorrect, and out of context. (NY Times)

TPP Can Be Fixed If You Know What’s Wrong with It
Jeffrey J. Schott, Senior Fellow at the Peterson Institute for International Economics, analyzes how TPP can be fixed. (Peterson Institute for International Economics)
Donald Trump Retreats from Trade Deals at his Peril
Equally, Senator John McCain explains in this op-ed why leaving TPP would be harmful to the United States’ economic and diplomatic interests in Asia. (Financial Times)
Trump Will Not Rip up NAFTA
Anthony Scaramucci, a senior advisor on the Trump transition team, stated that President-elect Donald Trump is a free-trader who is looking to make trade deals, including NAFTA, more fair, not scrap them. (The Hill)
How Will the US Presidential Election Impact Asian Economies?
Priyanka Kishore Lead Asia Economist at Oxford Economics analyzes how the US presidential election will impact Asian economies. (Brink Asia)
Globalization
Video: IMF’s Lagarde on Globalization
Managing Director of the International Monetary Fund Christine Lagarde says globalization needs to have a more inclusive ‘face.’ (Bloomberg)
Globalization and the German G20 Presidency
The German Presidency of the G20 has started on December 1. The office of Chancellor Merkel announced that “Shaping Globalization that benefits everyone” will be one of the priorities. (Bundesregierung)