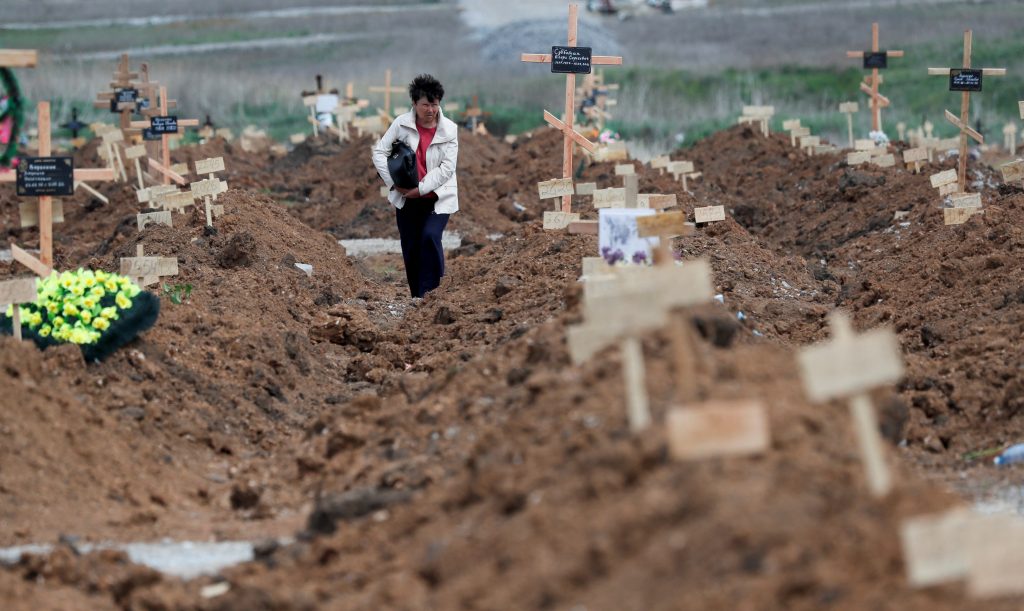 As the Russo-Ukrainian War enters its fourth month, calls are mounting for Ukraine to trade land for peace and accept a compromise settlement that would allow Vladimir Putin to retain control over at least some of the regions currently under Russian occupation.

The most high-profile advocate of appeasement so far has been former US Secretary of State Henry Kissinger, who garnered global headlines when he argued at the recent World Economic Forum that Ukraine should be prepared to cede territory to Russia in order to end the war. Likewise, French President Emmanuel Macron has called for a compromise solution and warned against “humiliating” Putin, while his German and Italian counterparts have indicated support for similar positions.

Arguments in favor of appeasement have also become increasingly common in the international media. A May 19 New York Times editorial that spoke of the need for Ukraine’s leaders to make “painful territorial decisions” was one of numerous recent high-profile articles calling on Kyiv to accept the Russian annexation of Ukrainian lands in exchange for peace.

These outpourings of solicitude for Putin are an indication of continued international reluctance to accept the reality of an escalating confrontation with the Kremlin. They also reflect widespread ignorance of modern Russia and a failure to grasp the true nature of the current war.

The war unleashed by Vladimir Putin on February 24 is a classic example of unprovoked international aggression. Crucially, the main objective of the war is to destroy the Ukrainian state and nation. This goal has been repeatedly stated by Russian officials including Putin. It is also regularly reinforced by the Kremlin-controlled Russian media, where talk of genocide in Ukraine has become normalized since the beginning of the invasion.

Russian war aims include the elimination of the territorial, political, economic and cultural basis of Ukrainian statehood. Putin himself has often declared that Ukrainians are really Russians (“one people”) and has argued at length that Ukraine has no right to exist as an independent and sovereign state. In other words, this is a genocidal war in line with the terms of the 1948 Genocide Convention. It is being waged with the explicit intention to “completely or partially destroy a group based on its nationality, ethnicity, race, or religion.”

Confirmation of Russia’s genocidal objectives in Ukraine goes far beyond the unhinged public statements of Putin and his propagandists. During the first three months of the war, evidence has emerged of mass murders, widespread torture and sexual violence designed to hinder future childbirth, forced deportations (especially of children), the destruction of Ukrainian cultural heritage, and systematic policies of Russification. In areas occupied by the Kremlin, potential opponents of the Russian takeover have been subjected to Soviet-style round-ups and in many cases remain unaccounted for.

These war crimes are not aberrations but rather a revival of traditional Russian imperial policies toward Ukraine. From the 1708 sack of Ukrainian Cossack capital city Baturyn during the reign of Russian Czar Peter the Great, to the genocidal famine engineered by Stalin in early the 1930s, Russian leaders have a long history of ruthlessly eradicating any manifestations of Ukrainian statehood. Today’s war fits seamlessly into this long and bloody history of Russian imperial aggression.

As any student of WWII will tell you, attempting to appease genocidal tyrants with territorial concessions is not only morally repugnant but also strategically nonsensical. The only response such figures understand is overwhelming force. The only meaningful objective is their total defeat.

Supporters of appeasement must also recognize that a genocidal war of aggression cannot be accommodated within the existing framework of the international order. Indeed, war crimes on this scale are antithetical to any kind of order whatsoever. Failure to defeat those responsible for such crimes merely accelerates the descent of world politics into the jungle and sets a dreadful geopolitical precedent for the decades to come.

As many commentators have written, it makes no sense to pursue a negotiated settlement over Ukraine’s head analogous to the infamous Munich Pact of 1938.  President Zelenskyy has already forcefully made this point. Nevertheless, we must constantly remind people that in launching this war, Putin broke at least seven solemn international treaties and accords to which Russia is a full signatory. On what basis can we assume that he and his government would observe any new settlement?

Nor is there any indication that Russia is currently seeking to save face or ready to accept a negotiated settlement. Putin has so far refused every “off-ramp” or offer of negotiation because he thinks he can ratchet up the pressure on what he considers to be a decadent West until it gives him everything he wants. Like a mob boss, Putin uses the threat of violence to intimidate his Western opponents. He knows they fundamentally fear a military confrontation and sees each successive appeal for appeasement as proof that his bully-boy tactics are working.

Those clamoring to dismember Ukraine in order to continue doing business with Moscow need to explain why we should be so afraid of Russia when it is Russia that faces an infinitely stronger alliance. Instead of seeking to negotiate at Ukraine’s expense, the West should focus its energies on making sure Ukraine wins and Russia loses. This is obviously the correct approach for Ukraine itself and for the democratic world in general. It would also ultimately be in Russia’s interest if the country is to finally emerge from its authoritarian prison and follow the path of postwar Germany.

Appeasing Russia will not end the war or secure peace in our time. On the contrary, it will embolden Putin, prolong Ukraine’s pain, weaken the West, and destabilize the wider world. The entire notion that the current war can be resolved via compromise is a dangerous illusion. Until Russia is decisively defeated, any pause in the fighting will be temporary. Territorial concessions will only whet Putin’s appetite for further conquests while exposing millions more Ukrainians to the Kremlin’s genocidal agenda.

Image: Tatyana, 68, walks at a cemetery in search of her husband's grave in the settlement of Staryi Krym outside Mariupol, Ukraine. May 15, 2022. (REUTERS/Alexander Ermochenko)