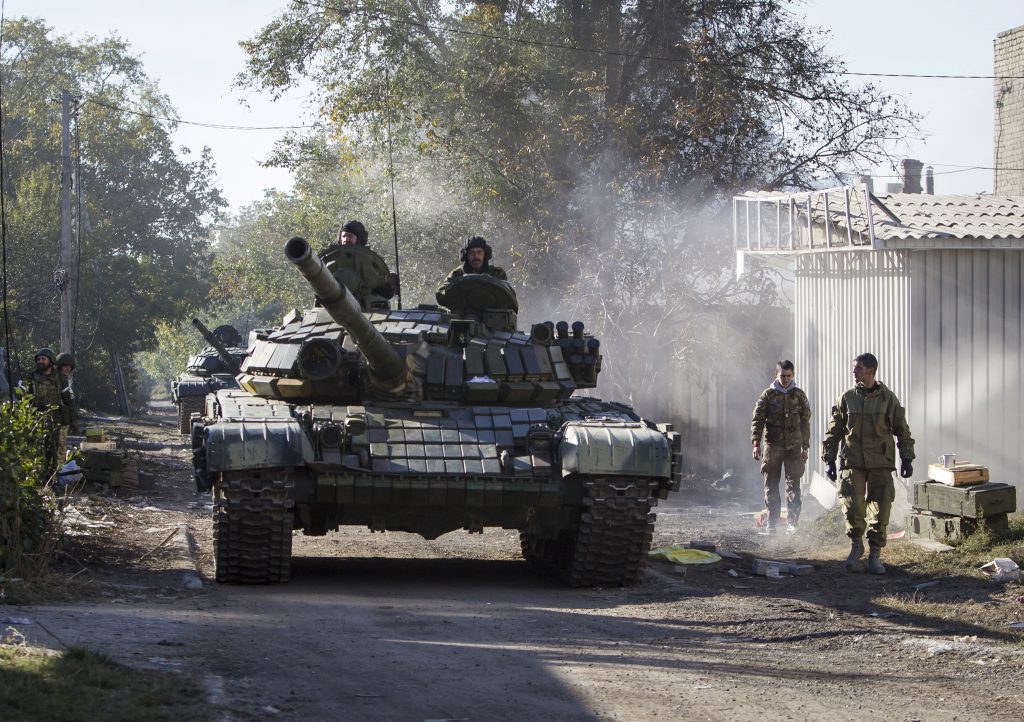 Tanks and fighters of the Russia-backed Donetsk People’s Republic move during a battle with Ukrainian troops near the airport in Donetsk city, October 4, 2014. Russian soldiers, their family members, independent media and ordinary residents near Ukraine’s border all have documented Russia’s direct combat role in Ukraine with tanks, rocket fire, paratroopers and other forces, as well as its recruitment, training and arming of the proxy militias in Donetsk and Lugansk provinces. (Reuters/Shamil Zhumatov)

When Hitler Invaded Poland, No One Demanded Polish Reforms Before Offering Help. Why Is It the Reverse for Ukraine?

“September 3, 1939 – British and French commentators and officials said today that it could no longer be denied that Hitler was invading Poland and that the Nazi forces represented the most serious threat to the existence of that country, but they said that Warsaw could not reasonably expect allied assistance unless it carried out massive reforms first.”

That story, of course, never happened. …  No one suggested that Poland needed reforms before defense because they recognized that if Poland did not exist, it could not reform. (The exception was those in London and Paris with links to the Communist Party who followed the Kremlin line even when Stalin was an ally of Hitler, as was then the case.)

But that was then, and this is now. Today, media outlets and officials in Western countries, having in all too many cases done their best to ignore or minimize Russian aggression, are finally being forced to recognize that what Ukraine faces is a Russian “invasion” and that indeed Ukraine and her people are fighting for survival.

To End Corruption in Ukraine, Will Russian Occupation Help?

Western Voices: We In making this concession to reality, however, many of these same outlets and officials have come up with a fallback position to justify their unwillingness to provide the kind of assistance Ukraine so clearly needs: They point to the corruption and lack of reform in Ukraine and say that Kyiv must carry out reforms now before it can hope for help.

That Ukraine needs reforms in its economic and political systems is something few question. Ukraine will be a success in the middle and longer term if and only if it carries them out, as difficult that will inevitably be. But demanding reforms from someone who is looking down the barrel of a gun before helping him is obscene for at least three reasons.

First, the very people who are making this argument now often have excused other countries (and their own as well) from making necessary reforms in the name of national security and Realpolitik. Obviously, for them, Ukraine is a special case, clearly because of Russia, and they won’t extend that logic to Ukraine.

Second, those making this argument ignore the fact that the country in this conflict that needs reform most is Russia. It needs a government which lives up to its international obligations rather than invading neighboring countries; it needs an economy not dominated by corruption; and it needs a political system in which the Russian people can be free.

And third, those in the West saying this ignore the fact that Vladimir Putin isn’t interested in reforms or in the survival of Ukraine. He wants to break Ukraine first by partitioning it and then by subordinating it completely to the Kremlin. What his “reform” program for Ukraine would be is very much on view in the criminal actions of his agents in Donetsk and Luhansk.

Does anyone really think that Ukraine—and its prospects for the kind of reforms its people want—will be advanced by allowing that to happen?

Some years ago, a very wise leader of one of the post-Soviet states told the author of these lines that before his country could become a democracy, it had to become a country. His words can be updated: Before Ukraine can reform—and there is no question that it must reform—it must … first be able to defend itself, and with our help.

Getting this sequence wrong and putting the cart before the horse, a some are now doing, is a prescription not for a better future but for disaster and not only for Ukraine but for the West as well.

Paul Goble is a career scholar, analyst and author on the ethnic history and politics of the former Soviet Union. He served in the State Department, the CIA and at Radio Free Europe/Radio Liberty. He wrote this essay for his blog, Windows on Eurasia.