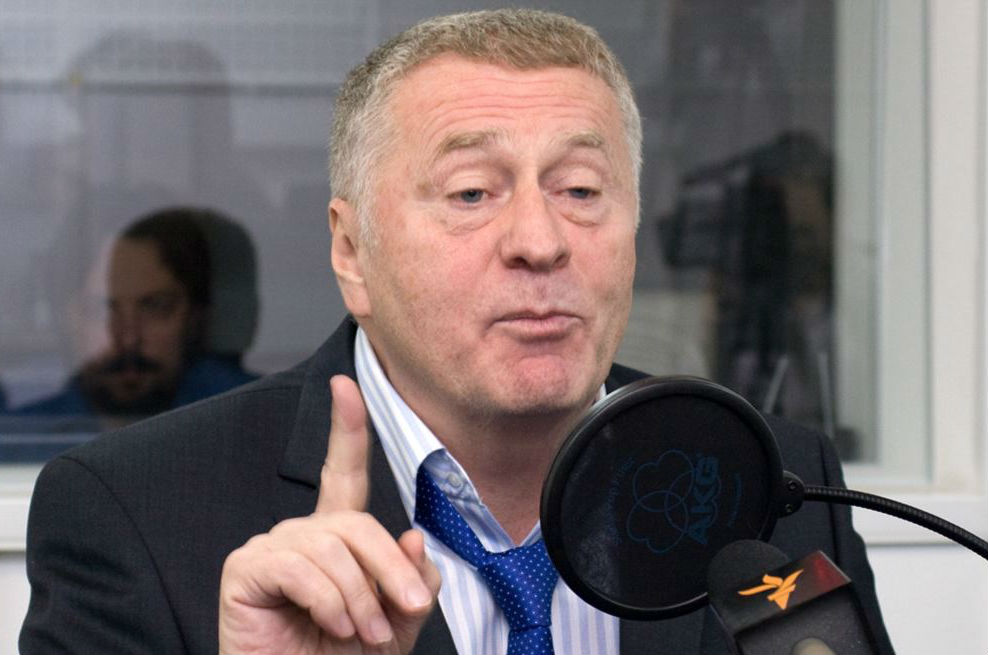 Vladimir Zhirinovsky, Vice Speaker of the Duma and leader of the ultra-nationalist Liberal Democratic Party, has announced that in 2016, Russian flags will fly over Kyiv, Riga, Tallinn, and Vilnius. Zhirinovsky is known to fly trial balloons on the Kremlin’s behalf. One cannot tell whether this is information warfare, a mere bluff to unsettle NATO, or a real signal. Credit: Radio Free Europe/Radio Liberty.

The conflict in Ukraine highlights dangerous trends in Russian foreign policy. Russian-backed separatists and the Russian military have killed thousands of civilians and Ukrainian soldiers in eastern Ukraine. It’s the starkest example of Moscow’s neo-imperialist foreign policy so far. However, even more worrisome trends have emerged.

Last week, Yevgeny Fedorov, a ruling party Duma majority member asked the Russian Prosecutor General’s office to examine the 1991 recognition of the sovereignty of the Baltic states by the USSR State Council. The Prosecutor’s office obliged.

Now, the same Fedorov and a colleague want to annul the creation of the State Council altogether as “an act of treason,” and possibly put Mikhail Gorbachev on trial for the dismantlement of the Soviet Union.

The revisionist sentiment driving this action is reminiscent of the German revanchism after World War One which led to the rise of Adolf Hitler.

Legally, the Prosecutor General’s office doesn’t have jurisdiction over Soviet state action or any standing in international law. The Baltic states were recognized by Vladimir Lenin, the founder of Soviet Russia, and by the international community as early as the 1920s, and then again in the 1990s when the Russian Duma ratified border agreements with Latvia and Lithuania.

But the Prosecutor General’s office says that the State Council of the USSR, an “unconstitutional organ,” recognized the independence of Estonia, Latvia, and Lithuania, and therefore that recognition was “defective.”

We have seen this spectacle before. Earlier this year, the Prosecutor’s office declared the USSR’s 1954 transfer of Crimea to the Ukrainian Soviet Socialist Republic illegal. So this appears to be the next scene in what is the same script. However, if the USSR’s recognition of the Baltic states was illegal, so was the dissolution of the Soviet Union. In which case, Putin needs to return Russia’s nuclear suitcase to Gorbachev.

The decision by the Prosecutor’s office may have far-reaching geopolitical consequences. In Russian playwright Anton Chekhov’s dramas, if there is a gun hanging on the wall in act one, it must go off by act three. Only this time, instead of a gun, it could be a nuclear warhead or an Iskander missile.

Russia’s aggression in eastern Ukraine is causing grave concern in Riga, Tallinn, and Vilnius. The Prosecutor General’s decision will be made in the Kremlin and could become a fig leaf to justify intervention in Narva, Estonia, or Riga, on behalf of Russian-speaking residents.

This could open the way for Russian special forces to escalate tensions in the Baltic states. If this scenario plays out, NATO’s existence would be challenged.

By testing the West’s nerve, the Kremlin is pursuing a long-held goal—to split NATO and sow discord in Europe. At the 2015 GLOBSEC conference in Bratislava, I witnessed how the Czech Republic, France, Germany, and Hungary took a more conciliatory attitude toward Russia, while Poland and the Baltic countries were unwilling to make any concessions.

In search of legal loopholes to legitimize their territorial expansion, the Kremlin is ready to play this spectacle out ad absurdum. Reversing recognition of the Baltic states would be more destructive and destabilizing than the recent reversal of Crimea.

One can only hope that after reviewing the Baltics question, the independence of Poland and Finland, as well as the purchase of Alaska by the United States from the Russian empire in 1867, are not next.

The Russian Duma has excelled in dubious law-making in the past two years. Its accomplishments have ranged from draconian foreign adoption laws to anti-gay propaganda laws to the refusal to honor the memory of former State Duma deputy Boris Nemtsov.

Not to be left out of the action, Vladimir Zhirinovsky, Vice Speaker of the Duma and leader of the ultra-nationalist Liberal Democratic Party, has announced that in 2016, Russian flags will fly over Kyiv, Riga, Tallinn, and Vilnius. Zhirinovsky is known to fly trial balloons on the Kremlin’s behalf. One cannot tell whether this is information warfare, a mere bluff to unsettle NATO, or a real signal.

The Duma, famously called “not a place for discussions” by former speaker Boris Gryzlov, is a mere actor in this absurd performance.

For centuries, Russia’s rulers have seen territorial expansion as their main task. This strategy may have worked until the early twentieth century. However, gobbling up neighbors is a dangerous and illegitimate course for a modern country to pursue.

Border revisions set a dangerous precedent. By calling into question long-established borders, Russia is destroying the post-1945 European security order. After 1990, this order included the independence of the post-Soviet states. Instead of strengthening relations with its neighbors, Moscow is looking for excuses to escalate disputes, which could eventually result in a big European war, potentially including the use of weapons of mass destruction and millions in casualties. But for now, at least, the heads of the Baltic states will mute their reactions as long as their NATO allies remonstrate with Russia that the Alliance will not abandon its members in the face of a provocation.

No one wants to see these absurd spectacles. It is time for Russia to get back to reality. The alternative is too gruesome to consider.

Ariel Cohen is a Nonresident Senior Fellow at the Atlantic Council’s Global Energy Center and the Dinu Patriciu Eurasia Center. He is also Director of the Center for Energy, Natural Resources and Geopolitics at the Institute for the Analysis of Global Security and Principal of International Market Analysis Ltd.