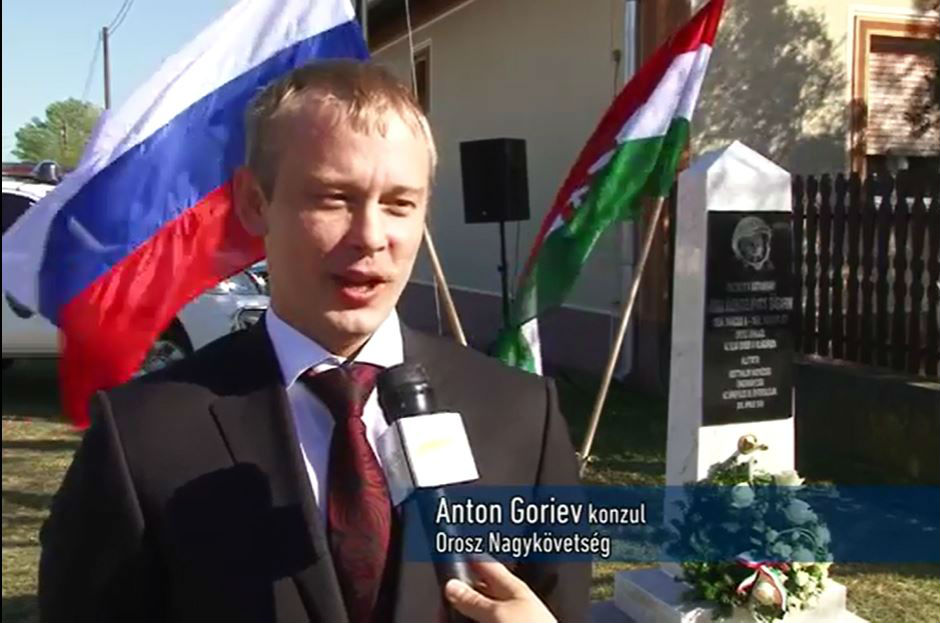 In 2016, the mayor of Ásotthalom, a small Hungarian town close to the country’s southern border, celebrated the opening of Gagarin Street with an obelisk to Soviet astronaut Yuri Gagarin and a speech about Russia’s greatness. The mayor was László Toroczkai, an extremist politician who serves as the vice president of the far-right Jobbik party; he is known for having organized vigilante groups to beat up refugees and banned Muslims and gay people from his village.

A high-level diplomatic guest attended the event: the leader of the Russian Consulate to Hungary. This case raises two questions. First, why did a far-right politician who had previously been proud of his anti-communism celebrate a hero of the Soviet Union? Second, why was a Russian diplomat openly legitimizing a controversial politician?

The short answer: Moscow sees the advantage of such “friendships” and invests in them.

When it comes to Russian efforts to incite violence, one usually thinks of the “little green men” in Crimea, or Russia’s proxies in eastern Ukraine. But Political Capital has conducted an extensive research project on Russian actors and hate groups in Central Europe, and has found that Moscow built up diplomatic, political, and sometimes financial ties to violent organizations in Central and Eastern Europe as well, though those activities have received much less international attention.

Central and Eastern Europe matters to Russia for two reasons. First, these are post-communist countries, and despite their decisions to “shift sides” and become NATO and EU members, Russia still feels that they belong in its legitimate sphere of influence.

Second, they are close to Ukraine, and in Moscow’s strategy, Ukraine’s neighbors can be used to destabilize it. The goal is to exploit weaknesses inherent to the Central-Eastern European region: the bitter memories of past territorial disputes, nationalist-secessionist tendencies, and the haunting specters of chauvinist ideologies promising to make these nations great again. In fact, xenophobic nationalism is widespread in the region and revisionist, expansionist tendencies enjoy considerable support. The more disputes that exist between these countries, the more historic debates over borders are resurrected, and the more fear and distrust is stirred up in the region, the better it is for the Kremlin. By supporting revisionist movements with territorial demands in Ukraine, organizations that recruit for the “rebels” in eastern Ukraine and political players that aim to provoke bilateral conflicts can be helpful tools to achieve this grand strategy.

In Moscow’s toolkit of active measures and hybrid warfare, the boundaries between violent and nonviolent tools are increasingly blurry. And this process is two-directional: not only can information be weaponized; violent organizations can be used as soft-power tools. The Kremlin is highly effective at infiltrating fringe parties and paramilitary organizations in Central Europe. They are easy to purchase or control, as these extremist groups tend to be small and easily manipulated.

There are several examples of this in the region. Hungary’s Sixty-Four County Youth Movement (HVIM), founded by Toroczkai, has been engaged in extremist recruitment activity beyond the country’s borders; it also released statements claiming that “Transcarpathia is not part of Ukraine,” organized protests in support of the Donetsk People’s Republic, and called for the boycott of chocolates produced by Ukrainian President Petro Poroshenko’s company Roshen.

Similarly, Polish counterintelligence is currently investigating Mateusz Piskorski, the leader of the Polish leftist party Change (Zmiana), as well as former activists of the far-right Polish Congress of the New Right (KNP) on charges of espionage on behalf of Russia. The latter had taken part in so-called “active measures” on Ukrainian territory in 2014 to provoke an ethnic conflict against Polish minorities in western Ukraine. In the Czech Republic, the Donetsk People’s Republic opened a “consulate” (not recognized by the Czech authorities) in September 2016 with the help of Czech far-right actors, including the National Home Guard, a paramilitary group.

Of course, violent organizations are not always predictable partners and can get out of hand. The leader of MNA 1989, a Hungarian extremist movement with extensive ties to Russian secret services, murdered a policeman in Hungary in October 2016, for instance.

While the success of destabilization efforts in the region has been rather limited, this threat should be taken seriously. But it is not: Moscow’s effort remains unchallenged in most of these countries. Despite some sporadic efforts in Poland, Slovakia, and the Czech Republic, there is still widespread denial about the Russian threat throughout the region. Nationalist leaders such as Milos Zeman in the Czech Republic and Viktor Orban in Hungary tend to boast about their ability to defend their countries from external threats, but they remain silent when it comes to obvious cases of Russian attempts to undermine their sovereignty and humiliate their state institutions.

Several immediate steps should be taken. First, Russian influence in the region should be treated as a security threat, and national interior ministries and counterintelligence agencies must have the staff, resources, and political support to reveal these links. Second, these issues should be raised during bilateral diplomatic discussions. Third, financial links between Russia and extremist organizations should be officially investigated, and recently leaked information (the Surkov leaks, Usovsky e-mails, and OCCRP’s “Laundromat” investigation) should be scrutinized by ministries of interior, law enforcement, and security agencies. Fourth, widespread lustration is needed to clean up countries’ law enforcement agencies and intelligence services, many of which are still infiltrated by Russian secret services.

And while stronger European integration could be helpful, the EU should invest more in revealing and confronting Russian influence through extra finance for its unit monitoring and countering disinformation, and more integrated secret and intelligence services. To overcome the reluctance of some member states, such as Hungary, to reveal the potential dangers of Russian influence and to acknowledge the pan-European nature of these threats (and of international terrorism), EU leaders should push for more integrated intelligence services under the umbrella of the European Council or the European Commission.

And finally, more political investment by the United States is needed. The “soft isolationist” stance of US administrations since EU accession has created a geopolitical vacuum and encouraged malevolent economic and political influences. To counter the region’s gravitation toward Russia, the US should use carrots and sticks simultaneously by increasing its commitment to Central Europe with more energy deals, and more political and security cooperation, while putting increasing pressure on these NATO allies to do their part in fighting Russian influence.

In case one needs reminding, Central and Eastern Europe was the breeding ground for both of the twentieth century’s world wars, and it remains a highly troublesome area.

Péter Krekó is a senior affiliate with Political Capital in Budapest, and is currently serving as a visiting Fulbright professor in Indiana University’s Central Eurasian Studies department. Lóránt Győri is a political analyst at Political Capital.