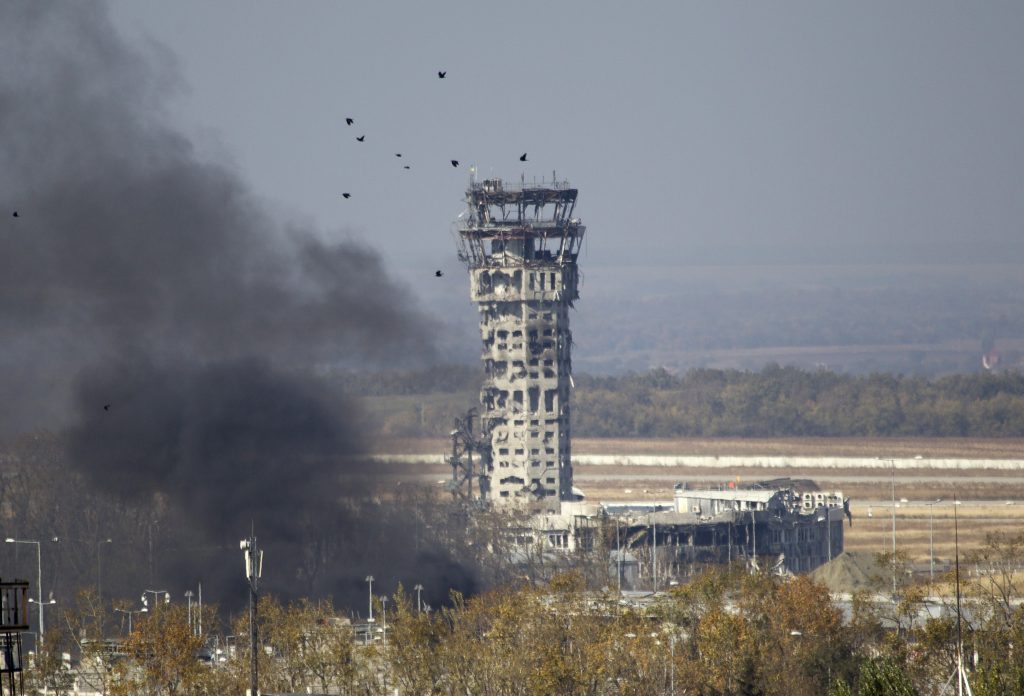 Smoke boils up from a fire near the ruined control tower of the Sergey Prokofiev International Airport in Donetsk, October 9. The tower, shattered by the mortar and shellfire of an intense battle for the airport, has become a symbol for the failure of the September 5 peace deal between Russia and Ukraine to halt fighting in the war. (REUTERS/Shamil Zhumatov)

All of these problems, Clark says, will become tougher to address if the United States fails to help Ukraine defend itself against Russia’s war. That is because President Vladimir Putin is seeking not only to destroy or maim Ukraine’s independence from Moscow. His assault on Ukraine also is a shock-and-awe demonstration for all of Eastern Europe (and others) that NATO’s security umbrella is meaningless in a region that Russia defines as its strategic backyard.

“If you look at the challenges facing the United States, none … can be handled effectively unless we have really tight relations with the countries that most share our values. That’s Europe” and the NATO alliance, Clark told policy specialists and diplomats tonight at the Atlantic Council. “When we look ahead, we need that linkage with Europe to help manage the ascent of China, to deal effectively with cybersecurity, to work the financial system,” Clark said. “Europe’s 500-plus million people in the EU, [and] a GDP about the size of ours” make it an essential partner for every US strategy on major problems, he said.

“If we lose Ukraine, NATO will be much more difficult to manage,” Clark said.

Clark who served as NATO’s top officer, the Supreme Allied Commander in Europe, during a thirty-four year military career, visited the Atlantic Council on a tour to promote the book he released this week, titled Don’t Wait for the Next War: A Strategy for American Growth and Global Leadership. A decade after Clark ran for president, the book is his effort to lay out a long-term national strategy for continued global leadership. Strategy is absent in a political system that encourages policymaking to suit short-term, partisan political needs instead, he says.

As the United States and the European Union imposed measured economic sanctions against Russia this year, Obama administration officials said Washington held back more potent punishments, notably against Russia’s banking system, to accommodate more cautious European governments. But Clark says hesitation also has flowed in the other direction, from Washington to Europe, notably in the United States’ rebuff of Ukraine’s request for weapons such as anti-tank or anti-aircraft rockets.

Clark told this story: “I asked the prime minister of an Eastern European country, ‘Would you be prepared to give military assistance to Ukraine? They’re your neighbors.’ He said, ‘No! We’re afraid!’ I said, ‘What are you afraid of?’ He said, ‘We’re afraid of Russia!’ I said, ‘But you’re a member of NATO.’ He said, ‘Yes, but we’re afraid of Russia, because the United States hasn’t taken the lead on this.’” The NATO treaty’s Article 5 formally promises that the entire alliance, including the United States, will rally to defend any member state that is attacked. Still, “all through Eastern Europe,… the [US] failure to stand up more strongly for Ukraine has created a sense of uncertainty and doubt,” Clark told his listeners.

“If you don’t give Ukraine the means to defend itself, you leave the door open for more aggression” by Russia, an example that China will readily follow, Clark said. In China’s government, “They’re watching Ukraine, because they’re asking themselves, ‘Hmm, if Russian can get something in Crimea, couldn’t we do something in Taiwan? … What’s the reaction of the West? Can we get away with it?’”

After years of Ukraine’s internal corruption, plus subversion conducted by Russia, the Ukrainian army was unprepared to confront the Russian troops who invaded the Crimean Peninsula at the end of February. But Ukraine has demonstrated a readiness to fight. Within four months, Ukraine’s government revamped its army leadership and drafted legions of new troops. Tens of thousands of Ukrainians joined new, volunteer battalions or donated to public campaigns that have bought and delivered uniforms, body armor and other basic equipment to front-line troops. Public opinion surveys in Ukraine and political analysts say that twenty-three years of Ukrainian independence from Moscow’s rule already had consolidated a Ukrainian sense of national identity.

Clark stressed that he does not support any idea of including Ukraine within NATO. “We don’t need Ukraine as a member of NATO, we shouldn’t put it in NATO. It’s a different country. It was never our plan, when we were talking about NATO enlargement, to bring Ukraine into NATO. But when a nation of 45 million people, the largest nation in Eastern Europe, wants to have its own form of government and is invaded by another country, and it comes to us and asks for help, and we say ‘Not so fast!’ … Clark left the sentence unfinished.

Ukrainian President Petro Poroshenko visited Washington last month and asked for weapons and for the US to designate Ukraine a “major non-NATO ally” – a status already held by 15 other countries from Argentina to Afghanistan that would give it easier access to US military technology and training. The Obama administration refused both. Poroshenko did seem to build support in Congress, where the Senate Foreign Relations Committee voted 18-0 for a bill that would provide weapons. Still, final congressional passage of a bill could take until the end of the year. Analysts such as the Atlantic Council’s Ian Brzezinski and Canadian-Ukrainian military analyst Ihor Kozak have urged the Obama administration to provide weapons such as anti-tank missiles and to increase the small number of US military advisors working with Ukraine.

A semi-effective ceasefire proclaimed in early September has reduced clashes and casualties, but for Ukraine it includes the danger of letting Russia and its proxy forces in the Donbas region strengthen their forces and tighten their grip on the zone of Donetsk and Luhansk provinces that they control. Poroshenko says that, the truce notwithstanding, Ukraine needs new weapons to prevent a new Russian military that could aim to seize new stretches of his country.