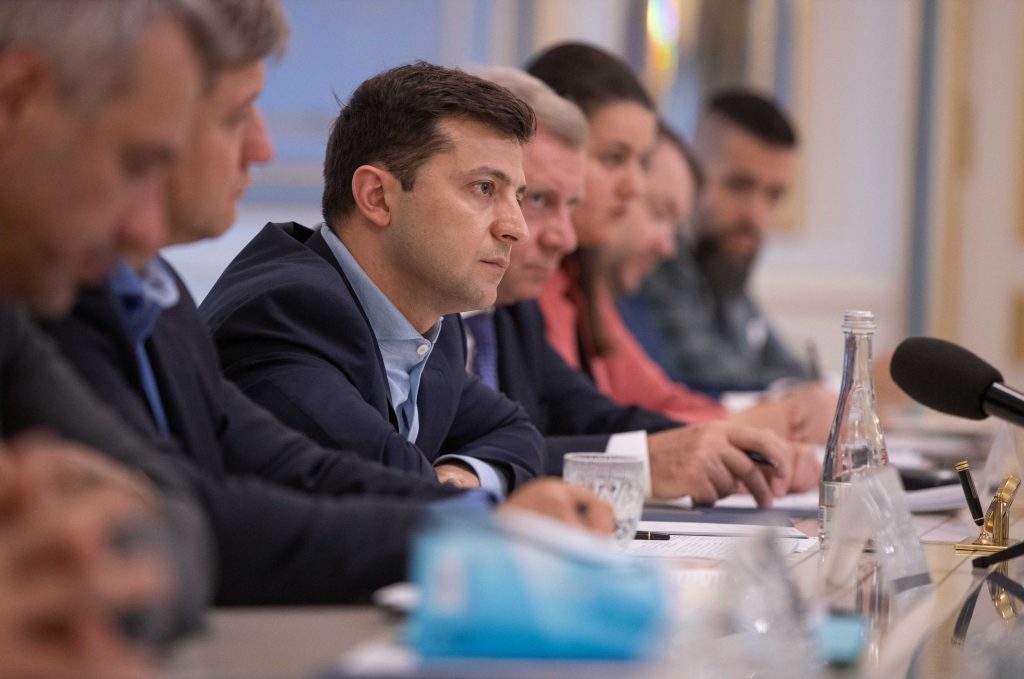 President of Ukraine Volodymyr Zelenskiy attends a meeting with representatives of the International Monetary Fund in Kyiv, Ukraine May 28, 2019. Ukrainian Presidential Press Service/Handout via REUTERS

The economic challenges, ranging from boosting economic growth, to paying off immense loans and staying afloat while facing social discontent, remain formidable. Other experts have offered their advice on this.

Law and order, and security, are jointly a critical dimension, and arguably the most important issues Zelenskiy faces.

The new administration must demonstrate that it has teeth. This pertains to the fight against corruption, combatting foreign subversion and espionage, outlawing private armies, prosecuting extremism and intolerance, and ending the practice of hiring thugs and mobs. Without the ability to enforce the law and punish those who break it, and put oneself above it, well-intentioned reformist programs will fail.

Like the general procuracy and the interior ministry, the state security service must also be controlled by reliable, professional, and apolitical appointees prepared to serve the state and its leadership in a responsible manner.

Where should Zelenskiy start?

After Volodymyr Zelenskiy’s landslide victory, Ukraine is in a regime change situation, whether we call it so or not. The previous administration carried out great economic reforms, but the country’s law enforcement and judicial system remain predatory. What Ukraine needs most of all is rule of law. Zelenskiy has a tremendous popular mandate, 73 percent […]

Ukraine needs a central think tank to stimulate coherent policy analysis. It is encouraging that the newly appointed Secretary of the National Security and Defense Council Oleksandr Danyliuk appreciates this. In his first press conference, he explained that he wants to transform this body into an analytical center responsible for strategic policy formulation.

Regular direct communication with the population is also vital. Petro Poroshenko was very effective at giving interviews, in decent English, to foreign media, or appearing before the United Nations General Assembly. But he was far less effective at communicating with his own people.

Zelenskiy is a master of new communication techniques, but he will need to maintain regular contact with the people, explaining, reassuring, inspiring, and when necessary, apologizing.

As for ending the war with Russia, given President Vladimir Putin’s enduring intransigence, there are no quick fixes. In the meantime, it is crucial that Ukraine steps up its fight to win the hearts and minds of the inhabitants of Russian-occupied Donbas and Crimea, but it should also offer an alternative view, a different sense of reality, within Russia itself.

Ukraine’s approach to external representation needs to be revamped as well. Better use must be made of the country’s embassies, consulates, and diplomats, and employment of suitable honorary consuls. The old ways and deadwood need to be removed and higher standards and better results sought. The capacity for providing reliable spokespersons at different levels, operating in different languages, also has to be addressed.

Interaction with the Ukrainian diaspora needs to be rethought. Apart from the emotional and symbolic ties, the latter represents a major source of support and an organic link with the outside world. But it is important that the mutual understanding of one another is realistic, and that cooperation is based on a constant open, two-way, invigorating exchange and not on self-serving ritualism and illusions.

Zelenskiy’s overture to the Ukrainian diaspora in his inaugural speech deserves attention. He wants to offer citizenship to recognize those Ukrainians who have demonstrated commitment to independent and democratic Ukraine and want to be involved in its future development.

Culture and language remain important sensitivities that will have to be carefully respected, from the concerns of the promoters of Ukrainization, to the insecurities of Russophones and national minorities.  Only by shaping an inclusive modern Ukrainian political nation will cohesion and unity be ensured.

Zelenskiy, a Russophone who has already switched for official purposes to Ukrainian but is associated as a former showman with TV productions which satirized the Ukrainian character, will have to reach out to the Ukrainian “patriotic” constituency that has rejected him, or is wary of him. But he will also have to balance this with his appeal to a far larger constituency of supporters whose understanding of what it is to be a modern Ukrainian, at a time of war at that, is not based as much on language, religion or a particular historical narrative.

Here there is a need for more substantial state attention to diverse forms of cultural self-assertiveness and capacity building at home and reinvigorating cultural diplomacy abroad. Education, publishing, cinema, TV, and theater are areas that need proper support, while the promotion of Ukraine’s image abroad must go beyond commercial brands, IT, business opportunities, and tourism.

Finally, there is a need to revitalize and further empower civil society, both as a watchdog and to check power. Civil society should engage with the new administration and continue to serve as path for developing new talent.

Although Zelenskiy has dissolved the discredited parliament and scheduled early elections for July 21, the old forces linked to former President Petro Poroshenko have engaged in delay tactics. They have blocked changes to the electoral law and the replacement of the prime minister and prosecutor general. But in the Ukrainian context no one thought that change would come easily.

All eyes are now focused on the parliamentary elections. And the new president needs to concentrate on winning sufficient support which in alliance with others will make it possible for him to pursue his reformist course.

Bohdan Nahaylo is a British-Ukrainian journalist, author and veteran Ukraine watcher based in Kyiv, Ukraine. He was formerly a UN official and policy adviser, and director of Radio Liberty’s Ukrainian Service.