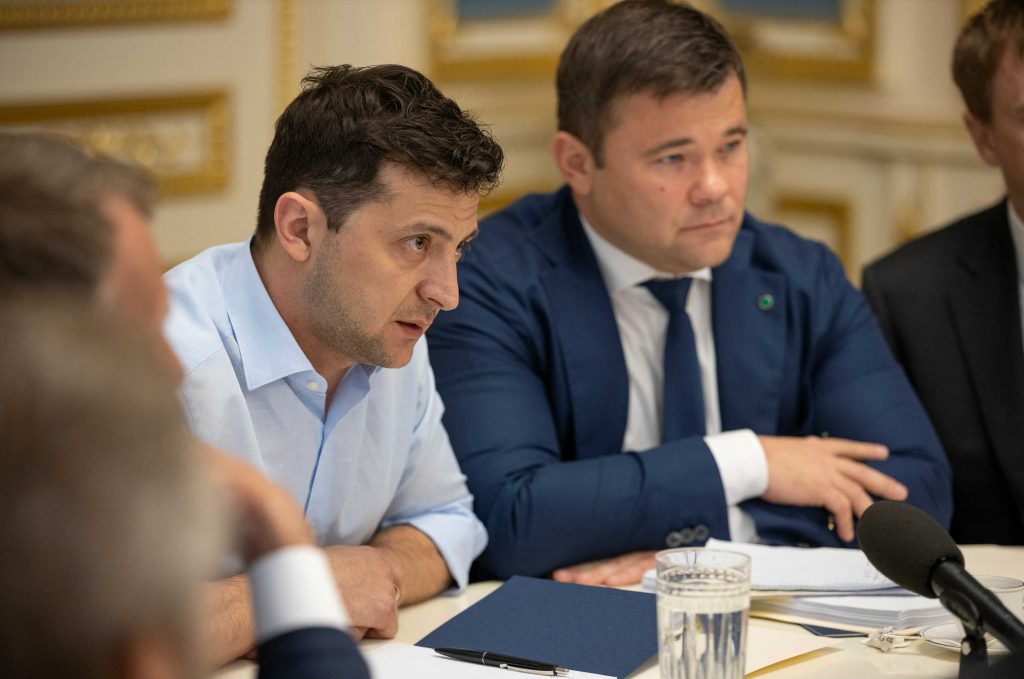 President of Ukraine Volodymyr Zelenskiy (L) and his lawyer and adviser Andriy Bogdan (R) attend a meeting with lawmakers in Kyiv, Ukraine May 21, 2019. Ukrainian Presidential Press Service/Handout via REUTERS

After Volodymyr Zelenskiy’s landslide victory, Ukraine is in a regime change situation, whether we call it so or not. The previous administration carried out great economic reforms, but the country’s law enforcement and judicial system remain predatory. What Ukraine needs most of all is rule of law.

Zelenskiy has a tremendous popular mandate, 73 percent of the vote, but this is an anti-mandate against the old dysfunctional system, which has rendered Ukraine the poorest country in Europe. Ukrainians want Zelenskiy to break up this system and build something better.

If Zelenskiy follows the old rules, he will fail, but how much leeway should he be allowed? He needs to utilize his current momentum to cross the chasm of misery to move to a more functional system. Poland’s great reformer Leszek Balcerowicz called this a period of “extraordinary politics,” when people accept temporary suffering for future gains.

Absurdly, in the fall of 2010 the Ukrainian Constitutional Court that is supposed to interpret the constitution abolished the December 2004 constitution at the behest of then-President Viktor Yanukovych, restoring the more presidential 1996 constitution. Several of those discredited judges remain on that court today.

When you try to break a bad old system, you need to bring in outsiders, who have a fair amount of knowledge but are not part of it, as John Williamson argued in his excellent volume The Political Economy of Policy Reform. That is exactly what Zelenskiy is doing. Most of his appointees are political amateurs. Estonia in 1992 was the most successful post-Soviet reform government under Prime Minister Mart Laar because it followed this model. Laar was 32 and he had three ministers who were younger than 30. His slogan was: “To wait is to fail.” He argues that it is better to act fast and make mistakes than to wait and be abhorred or compromise with the old elite.

Yet, a new leader needs to coopt some of the old insiders, because they know how the system works and how it can be broken. If a new leader sacks all of them, he might antagonize the whole establishment and unite them against him, as happens in the “Servant of the People,” where the Rada impeaches the fictional president. The difficult political art is assessing which old-timers to compromise with, and one can only judge in hindsight.

Zelenskiy appears to opt for foreign policy professionals of high repute, but he seems to be making his own choices. Diplomacy is not the rotten part of the system that needs to be replaced. The same can be said of the National Bank of Ukraine and the Ministry of Finance that maintain the macroeconomic standards of the International Monetary Fund.

In the presidential administration, Zelenskiy has chosen one member of the old guard, Andriy Bohdan, as chief. For the rest, he has appointed old friends from his production company Kvartal 95. In principle, this makes sense. He clearly feels he needs one hard-core policy professional, such as Bohdan. It remains to be seen if he has made a good choice.

Replacement of the prosecutor general and the head of the Security Services should be top priorities, because businessmen see these institutions as the most predatory.

It is vital for a new regime to hold early parliamentary elections. Otherwise the old guard will block reforms through the parliament, especially in Ukraine, where the distribution of power between the president, parliament, and government is so confused. The big risk in an interregnum is that the new guard cannot rule while the old guard feels no inhibition on theft. Therefore, the period before parliamentary elections after a new president has been elected is extremely dangerous and usually costly.

Ukraine knows this story all too well. The utter failure of the 1991-94 period was caused by the absence of early Rada elections. After the Orange Revolution, politicians focused on the March 2006 Rada elections rather than reform. In 2014, no economic reforms occurred until a new government had been formed in December. Ukraine needs to learn from history and not waste another opportunity.

If Zelenskiy had failed to dissolve the parliament, he would have invited failure. Now he has sensibly agreed with all the parliamentary factions to hold early elections on July 21. We should applaud his decision rather than invoke Medvedchuk’s constitution or a corrupt court. Only after new parliamentary elections can a new government be formed and a new reform program be adopted. Now we can hope for that in September.

An absurd argument against Zelenskiy is that a number of dodgy émigrés have returned. In reality, the current prosecutor general who was appointed by the previous president failed to prosecute these people and the courts failed to sentence them. These are sins of omission by the old guard. Whatever Zelenskiy would have done to stop their entry would presumably have been illegal.

Zelenskiy should be guided by sound democratic principles rather than a flawed constitution and a dysfunctional constitutional court. We observers should wish the new president the best of luck while carefully checking his actions.