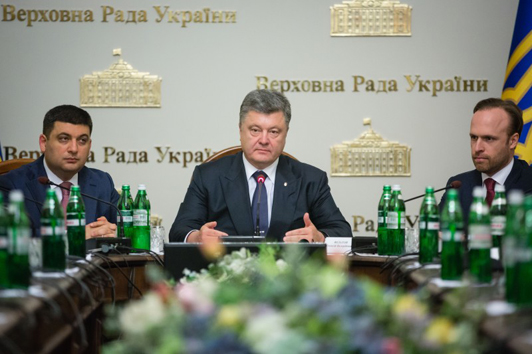 In peacetime, September 1 is an eventful day for Ukrainian children—it marks the first day of school.

But the war in Ukraine’s eastern Donbas region, now in its second year, has put a dark stain on this usually festive occasion. This year, Ukrainian kids in Kyiv started school following violent protests outside Parliament. On August 31, a few dozen members of the nationalist political party Svoboda (Freedom) and the paramilitary extremist party Right Sector gathered to protest the vote on a controversial decentralization bill to amend Ukraine’s constitution.

Things quickly spiraled out of control when demonstrators, now joined by onlookers, began grabbing police equipment and a self-proclaimed Svoboda activist threw a hand grenade at police officers. The protest—the most violent of its kind since the Maidan revolution—left at least one police officer dead and more than 120 people injured.

At its heart was the so-called decentralization bill, submitted by President Petro Poroshenko’s administration earlier this summer and approved on July 31 by Ukraine’s constitutional court. Exactly a month later, the measure passed its first parliamentary hearing with 265 votes in favor, paving the way for a second hearing, which requires 300 out of 500 votes for passage. The law outlines reform of Ukraine’s entire governance structure away from a highly centralized state— which Ukraine inherited from the Soviet era—and toward a transfer of power to regional and local councils. Recent polls show that most Ukrainians support decentralization.

The law in its current form gives no special status to the Russian separatist-controlled regions of Luhansk and Donetsk. But it does contain one particularly controversial and rather vague provision, which relegates governance of “certain counties of the Donetsk and Luhansk regions” to a separate law. The vagueness of this provision is likely intentional: it is meant to check a box of the Minsk ceasefire agreement signed in February 2015. That accord’s Point 11, included at the insistence of Russian negotiators, requires passage of a decentralization amendment by the end of 2015 and the adoption of a permanent law granting special status to separatist-held areas.

Allegedly, in a last-ditch effort, Western leaders, including German Chancellor Angela Merkel and French President François Hollande, pressured Ukrainian deputies to write in the controversial provision on Donetsk and Luhansk to comply with Minsk. This came as Ukrainian, Russian, OSCE, and separatist representatives once again met in Minsk to renew their commitment to the failed ceasefire accord.

Despite two ceasefires—one signed in September 2014 and the second, dubbed Minsk II, in February 2015—fighting continued in the Donbas contact zone. At least 200 Ukrainians have died since February, and the Russian separatist takeover of Debaltseve took place days after the February accord went into effect.

The renewed ceasefire attempt, a sort of Minsk 2.5, took effect on September 1—a symbolic gesture of peace on the first day of school. But after holding for just three days, fighting once again resumed in areas of Luhansk.

September 1 thus marked not only the usual first day of school for Ukrainian families, but also the Minsk protocol’s failure to achieve lasting piece and the dangerous pattern it has engendered. Fighting in the Donbas has killed more than 7,000 Ukrainian civilians and soldiers, and displaced about 1.4 million people, turning this into Europe’s largest internal displacement crisis since World War II. Russia has suffered as well.

According to allegedly leaked information, more than 2,000 Russian soldiers have been killed in fighting in Ukraine, and over 3,200 have been injured. While both sides have technically violated the Minsk agreement, there is no question that Russian-separatist forces commit most of the violations, taking additional territory and staging attacks on a daily basis. At present, 85,000 Russian soldiers are stationed on the Ukrainian border. Russian military openly operates military bases in Ukraine; at least one such base has been clearly photographed.

Meanwhile, as Russian President Vladimir Putin show no sign of respecting international laws or political borders, the Minsk protocol has given Russia a tool for squeezing more and more contentious concessions out of Ukraine. Point 11 is one such concession.

In turn, Western leaders then use the Minsk agreements to pressure Ukraine to accede to Russian demands. If Russia’s handling of the war in Georgia in 2008 has taught us anything, it’s that Putin will continue to use the diplomatic route to get what he wants while denying any involvement in the crisis.

Minsk III, IV, V and so on could very well be in Ukraine’s future for years to come. The real question is if—and when—Western leaders will acknowledge that they, too, are playing a part in Putin’s game, a game in which there is one real victim: Ukraine’s people.