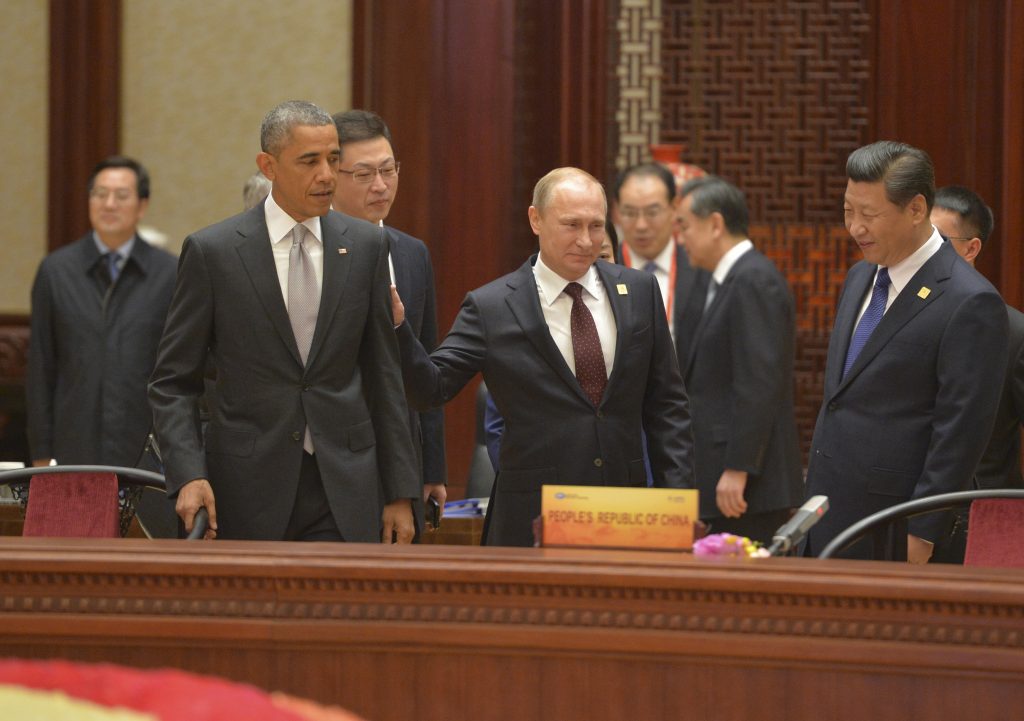 Russian President Vladimir Putin, center, pats President Barack Obama on the arm as leaders take their seats at the Asia-Pacific Economic Cooperation Summit in Beijing. Putin and Obama spoke briefly at the summit on the war in Ukraine as well as other topics, US officials said. (Reuters/Alexei Druzhinin/RIA-Novosti/Kremlin)

As the US Congress Reconvenes, It and Europe Must Respond to the Kremlin’s Coming Offensive in Ukraine

Russia has moved a massive wave of tanks, armored personnel carriers, and artillery into Ukraine’s Donbas region in recent days, accompanied by new uniformed troops without insignia, to bolster the armed forces of the Russian-sponsored Donetsk and Lugansk Peoples’ Republics.

This military escalation follows Moscow’s political support for pretended elections to consolidate the two mini-states, a step that Europe and the US regard as a fundamental violation of the Minsk peace process launched in August. Ominously, evidence is growing that this buildup is preparing a new offensive by Russian President Vladimir Putin in his war against Ukraine—a campaign of attrition against Ukraine’s economically fragile state.

Putin’s strategy would build the Donbas “republics” into a highly militarized proto-state, a mini-Sparta, wielding an army of covert Russian troops; Chechen and Russian Cossack mercenaries; and local fighters, many with criminal backgrounds. Ukrainian intelligence services estimate that this expanded force—paid, trained and equipped by Russia—numbers around 30,000, about half recruited from Donbas and half from outside Ukraine, mainly Russia.

US Congress Must Lead

The United States and Europe should heed these signs and prepare now to help Ukraine defend itself. As the US Congress returns to session this week following elections that will strengthen Ukraine’s allies in Washington, it should begin work immediately to authorize the supply of defensive weapons to Ukraine and the imposition of additional sanctions on Russia—steps that the Obama administration and European governments have hesitated to take. One bill, the Ukraine Freedom Support Act, has won bipartisan support and unanimous passage in the Senate Foreign Relations Committee.

The additional sanctions should be sectoral in breadth, perhaps moving toward complete isolation of Russia’s financial system. Support for Ukraine’s self-defense should include the offer, by US and allied governments, of modern (encrypted) communications and surveillance equipment, anti-tank and anti-aircraft weapons, precision artillery, weaponized drones, and financing for the rebuilding of a fully professional Ukrainian military.

Putin’s coming offensive in Ukraine relies on his faith that the United States and Europe will shrink from responding as long as he maintains the fiction that the Donbas republics and their war are spontaneous phenomena. The transatlantic community should make clear that it does not accept this transparent falsehood. (Recent reminders of its transparency include this: While Russia has denied NATO’s report that some 300 Russian troops are training Russia’s expanded Donbas proxy force, some of the trainers have kindly bought drinks for Western journalists at one of Lugansk’s last surviving restaurants.)

As often has been the case in this crisis, Russia and its proxies have clearly signaled their next steps. On October 31, just days before NATO (and the independent Organization for Security and Cooperation in Europe, or OSCE) reported the Russian military buildup, the leader of the Donetsk People’s Republic, Aleksandr Zakharchenko, announced that the statelet was creating a regular army. It would, he said, be capable not only of “defending but also of advancing” against Ukrainian forces.

This expanded military ambition suggests that President Putin has no interest in a “frozen conflict” on the model of Russia’s years-old sponsorship of static “rebel” territories—the Transnistria exclave in Moldova and the South Ossetia and Abkhazia mini-states in Georgia.

The newly militarized statelet in Donbas is far more dangerous—an engine for a permanent war against the fragile Ukrainian democracy that aims to ruin its economy and block its decision to seek a gradual integration into the European community.

This Donbas-as-Sparta strategy signals that Russia is highly unlikely to deploy its own army in a full-frontal invasion and occupation of Ukrainian territory. Even the increasingly erratic Putin understands that such a direct attack would launch a new Cold War, set off an arms buildup in Europe, and trigger sanctions that could cripple a Russian economy already weakened by the global decline in energy prices.

An escalated Donbas proxy war also reduces Putin’s domestic political risk. It will boost his popularity as a defender of “embattled” Russians in eastern Ukraine without the challenge to his standing that would be posed by thousands of Russian casualties. A poll by the respected Levada Center released on November 10 shows that only 13 percent of Russians would support their relatives joining the battle in eastern Ukraine. Sixty-eight percent would do all in their power to prevent their family members from taking part. Other polls in recent months also suggest that while Russians are convinced that Ukraine’s elected government actually represents a coup by US agents and neo-Nazis, they have no appetite for a war against fellow Slavs.

Putin’s militarized beachhead in eastern Ukraine offers a further benefit for Putin: It can focus independent Russian ultranationalists toward activity outside Russia, and away from challenging Putin’s corrupt state at home.

Putin’s creation of a mini-Sparta in Ukraine’s east is a serious challenge to the West. It reveals both the extent of Putin’s irrational calculations and the limits of Russian power. With an economy about 5 percent as big as that of the NATO alliance, Russia can ill-afford long-term isolation and accelerating economic decline.  Nor can it afford a major military occupation of Ukrainian territory. What it can do is to promote long-term instability and regional violence.

With his new preparations in place for a long, renewed war, President Putin has now revealed all his cards in his fight against Ukrainian independence and democracy. It is time for the West to respond.

Adrian Karatnycky is a senior fellow at the Atlantic Council and co-director of its Ukraine in Europe project.