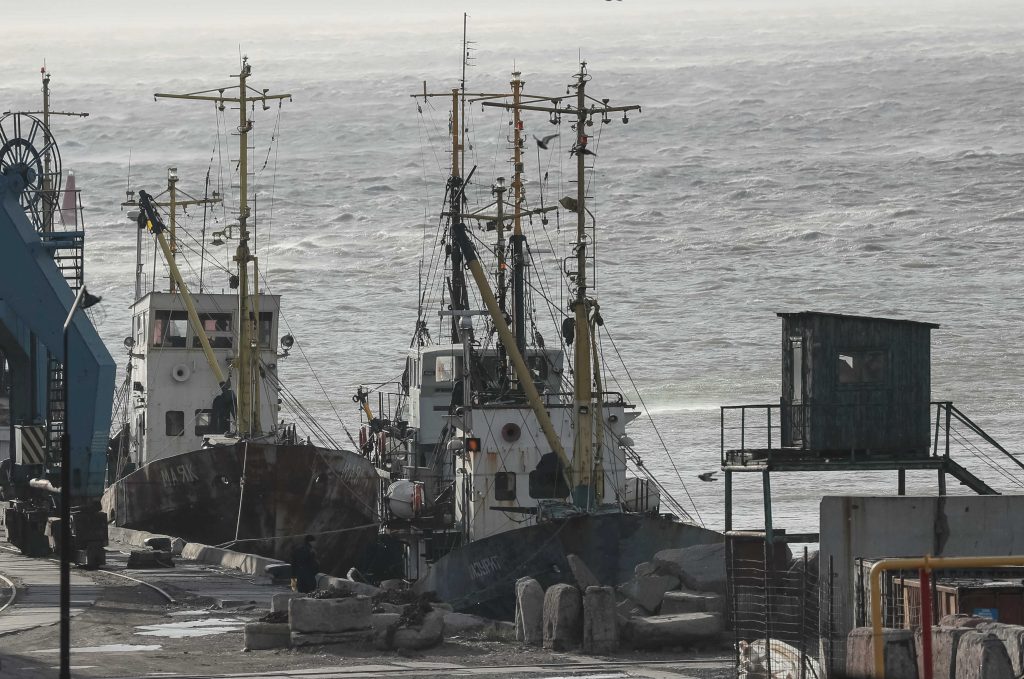 Moscow captured three Ukrainian navy vessels and arrested twenty-four Ukrainian sailors on November 25, 2018, near the Kerch Strait. The maritime clash indicates that the focal point of the Russian-Ukrainian military conflict may gradually switch from the Donbas to the Azov Sea and Crimean peninsula in 2019.

More conflict in the south would further throttle Ukraine’s already battered economy. According to Vitaliy Kravchuk, senior researcher at the Institute of Economic Research and Policy Consulting in Kyiv, “If there are further marine incidents, it could mean the closure of the Azov ports for shipping.” Such a development would have grave economic repercussions for the port cities of Mariupol and Berdyansk, which handle approximately 5 percent of Ukraine’s foreign trade. Ukraine has only limited alternative transport infrastructure to redirect trade flows. An escalation at the Azov Sea will threaten social stability in southeastern Ukraine. It might also lead to a significant reduction or even curtailment of Ukrainian economic growth in 2019 and beyond.

Four factors make further tensions between Russia and Ukraine along the shores of Crimea and mainland southern Ukraine probable. They include the West’s lack of reaction to the recent tensions, the absence of international organizations in the Azov Sea, the functionality of the Kerch Strait Bridge and its symbolism for Putin, and the unresolved issue of supplying fresh water to occupied Crimea. All four of these factors distinguish this area from the Donbas, where the OSCE is heavily present, a more or less stable front line has emerged, and the conflict has become partially frozen. Also, the EU’s most serious sanctions introduced in the summer of 2014 have later been linked to the fulfillment of the Minsk Agreements concerning exclusively the Donbas.

A major factor currently enabling escalation in the Azov is the West’s lack of reaction to the November 2018 naval confrontation. The West has done little beyond condemning the aggression and such symbolic measures as US President Donald Trump canceling an official meeting with Russian President Vladimir Putin (while still meeting him unofficially). The EU has not reacted and probably will not react materially, as it did after the shoot down of Malaysia Airlines flight 17 in July 2014 to the confrontation and capture of Ukrainian sailors either.

A third factor potentially motivating the Kremlin to behave more adventurously between the Azov and Black Seas could become technical malfunctioning or the economic ineffectiveness of the new Kerch Strait Bridge connecting Russia and Crimea. This prestige object has strong symbolic value for the legitimization of the Putin regime in the eyes of the Russian population. For one reason or another, this bridge might not provide a sufficient boost for Crimea’s social development or integration into the Russian economy, as promised. The Kremlin may start searching for excuses and try to stage an escalation that can be spun to explain a partial or full dysfunction of the bridge.

This would be especially the case if the bridge starts to crumble. Since its opening in May 2018, there have been repeated reports in the Ukrainian media about the bridge’s engineering issues and geological challenges. A closure or even collapse of the bridge would be a catastrophic blow to Putin’s post-annexation image, and make deceptive maneuvers—including military ones—by the Kremlin more probable.

A final urgent problem for the Kremlin is Crimea’s precarious situation with fresh water. In 2014, Kyiv stopped the delivery of water to the peninsula via the North Crimean Canal. Constantly declining aquatic reserves, in combination with a continuing dearth of energy supply, are a virtual time bomb with potentially far-reaching economic and social consequences for Crimea’s residents. In a surprising geoeconomic gaffe, Moscow has done little to resolve this issue, such a building at least one large desalination plant.

Should there be no solution, Crimeans will soon experience insufficient water supplies, which complicates business and daily life. A rise of social tensions on the peninsula may provide yet another potential trigger for escalation between Russia and Ukraine. Moscow may try to capture the closed channel between Crimea and the Dnipro River. This would lead Russian regular troops deep into Ukraine’s southern mainland and start a second high-intensity and then official war between the two countries.

These factors constitute only some of the possible scenarios for escalation between Russia and Ukraine. Yet, given that these four conditions are present in Crimea, the Kerch Strait, and the Azov Sea, they make rising tensions in this area likely. The Azov Sea ports of Mariupol and Berdyansk will continue to operate under various limitations and risks. Will Ukraine and its Western partners be willing to provide some plausible stability guarantees and security mechanisms to those businesses engaged in the region? If not, Ukraine as well as various national and foreign companies should start preparing for a gradual decline of Mariupol and Berdyansk as well as for the grave social and political consequences this will have for southern Ukraine and eventually the whole country.

Andreas Umland is a senior fellow at the Institute for Euro-Atlantic Cooperation in Kyiv, and general editor of the ibidem­-Verlag book series “Soviet and Post-Soviet Politics and Society” distributed by Columbia University Press.