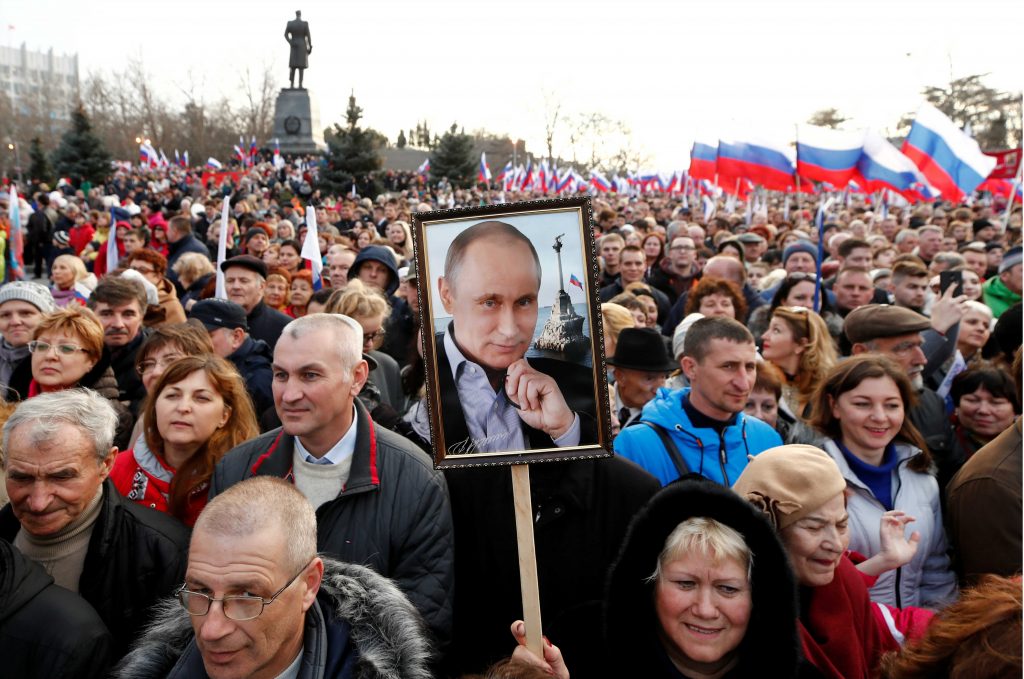 Those who hoped the situation there would improve after Russia took control were wrong. There has been no economic miracle in Crimea, despite Russian President Vladimir Putin’s promises. The rights of the Ukrainian minority and of Crimean Tatars are constantly violated, the economy is stagnating, and hundreds of thousands of residents are voting with their feet.

Russia is militarizing the peninsula, threatening NATO’s freedom to move forces through the region. And the construction of the Kerch bridge could cut off the Azov Sea from the Black Sea and choke off Ukrainian ports. This is happening at the same time as the Kremlin continues to sponsor its undeclared war in the Donbas region of eastern Ukraine.

The West has already unequivocally stated that it will never accept the illegal annexation of Crimea, but we need to go beyond declarations and focus on concrete steps that could end Russia’s aggression in both Crimea and the Donbas.

There are two key areas where we need to double down our efforts. First, our Crimea non-recognition policy needs to be beefed up and enforced for the long haul.

In 1940, in the aftermath of the USSR’s invasion of the Baltic states, the United States condemned the invasion and refused to recognize the annexation—a policy upheld for five decades. The Trump administration should issue a similar declaration regarding Crimea.

Congress should make its own declaration, perhaps in the form of an updated version of the 1959 Captive Nations Resolution. It could affirm US support for the sovereignty and territorial integrity of Ukraine, and the other former Soviet states—Georgia and Moldova—with portions of their territory under Russian occupation, while upholding the right of all states to chart their own course, including NATO and EU membership if they so choose.

EU members should also strengthen their Crimean non-recognition policy and enforce it, upholding sanctions and punishing those who violate them, including politicians who visit the occupied peninsula without Kyiv’s consent.

As part of a long-term non-recognition policy, the West needs to continue raising the Crimea issue in its interactions with Moscow. Russia treats it as a fait accompli and refuses to discuss it, hoping that in time we will acquiesce. We must not let them get away with this.

We should more forcefully debunk the Russians’ bogus historical narrative about the events of 2013-2014, and we should refute the specious legal arguments they have advanced to justify the annexation and the sham referendum that preceded it.

Especially outrageous is Russian Foreign Minister Sergei Lavrov’s recent misrepresentation of the terms of the 1994 Budapest Memorandum, in which Russia guaranteed Ukraine’s territorial integrity in return for its renunciation of nuclear weapons. Lavrov claimed that Russia only pledged not to use nuclear weapons against Ukraine, whereas the text states that Russia promised not to use military force of any kind against Ukraine.

We should support Ukrainian legal claims for compensation for the theft and illegal exploitation of Ukrainian economic assets in Crimea, including offshore energy deposits. And we should not recognize the results of the voting in Crimea during Russia’s upcoming presidential “election.”

And given the disturbing reports about human rights abuses, we need to push for greater humanitarian access by the UN or OSCE to occupied Crimea. We need to monitor human rights violations, bring them to the attention of the world, and apply pressure on Moscow to end the abuses.

Second, as a step toward the return of Crimea, we need to get the Russians out of the Donbas—and quickly, before the occupied Donbas becomes another protracted, unresolved conflict.

Moscow’s main goal in launching its undeclared war in eastern Ukraine was to destabilize Ukraine and bring to power leaders willing to accommodate Russian interests. Thanks to the courage of thousands of Ukrainian men and women who fought the Russians and their proxies in the Donbas, along with the pressure of US and EU sanctions, Russia’s maximum objectives have been thwarted.

But Russia is still using the war in the Donbas as a diversionary tactic—to keep our focus on eastern Ukraine and not talk about Crimea. Putin may also hope to cut a deal in which, in return for a solution in the Donbas, the West would agree to legitimize the illegal annexation of Crimea. That is the opposite of what we should do.

The Donbas and Crimea are not identical cases. But if we can get the Russians out of the Donbas first, we can at least show that it is possible to bring Ukraine’s occupied territory back under Kyiv’s control. In that sense, a genuine political solution in the Donbas would set a precedent for getting the Russians out of Crimea as well, even if it takes years.

To get to a deal in the Donbas, both the United States and its European partners need to breathe new life into the Minsk process. While the Minsk accords define an adequate end state as the reintegration of the occupied territories under Ukrainian sovereignty, diplomatic efforts are not delivering on the intended goal.

Contrary to those who describe it as a “frozen conflict,” the fighting in the east has intensified. In 2017, there were more casualties compared to 2016, as Russian-led forces have employed more accurate weapons. This is dangerous, since it leaves open the possibility that the conflict could fully re-erupt at any moment.

New thinking is needed. The recent US decision to provide Ukraine with Javelin anti-tank weapons and other defensive capabilities is welcome: it can deter new Russian offensives, show Putin that time is not on his side, and increase pressure on Moscow to negotiate.

In order to secure the full implementation of the Minsk agreements, we need to push for a UN peacekeeping force and interim civilian administration in the Donbas. This should be a real peacekeeping force with a robust mandate, not the limited version proposed by Putin.

A genuine UN peacekeeping force would need to cover the entire territory of the occupied Donbas region, with the goal of protecting the population and implementing all aspects of the Minsk agreements.

The force would ensure that both sides honored the ceasefire, pulled back their heavy weapons from the contact line and, in Russia’s case, removed its regular forces, the “little green men,” and the equipment it has provided to rebel forces in the Donbas.

Solving the Donbas would not only be good for the people of eastern Ukraine; it would be a major step toward reducing tensions between the West and Moscow. It wouldn’t directly change the situation surrounding Crimea. But an internationally-supervised transition back to Ukrainian sovereignty in the Donbas could serve as a model for Crimea at some point in the future.

Several states, including Sweden and Finland, have made public their willingness to participate in a peacekeeping force if the right mandate and authorities can be agreed upon. So the mission is feasible. The ball is in Russia’s court, and following the Russian presidential election on March 18, Russia’s intentions will become clearer.

Right now, it’s apparent that Moscow has not yet made the political decision to leave the Donbas, and may well be digging in for the long haul. If so, the West must keep the pressure on by holding the line on sanctions, tightening them further if Moscow remains intransigent, and providing the wherewithal for Ukraine to defend itself against any new Russian escalation.

Finally, the West must continue to do all we can to support Ukraine and encourage it on the path of reform, including rooting out corruption. The best answer to Russia’s aggression is a successful, secure, economically prosperous, and militarily strong Ukraine.

Alexander Vershbow is a distinguished fellow at the Atlantic Council’s Brent Scowcroft Center on International Security. Vershbow was the Deputy Secretary General of NATO from 2012 to 2016 and is a former Assistant Secretary of Defense and US Ambassador to Russia and NATO. He tweets @ARVershbow.