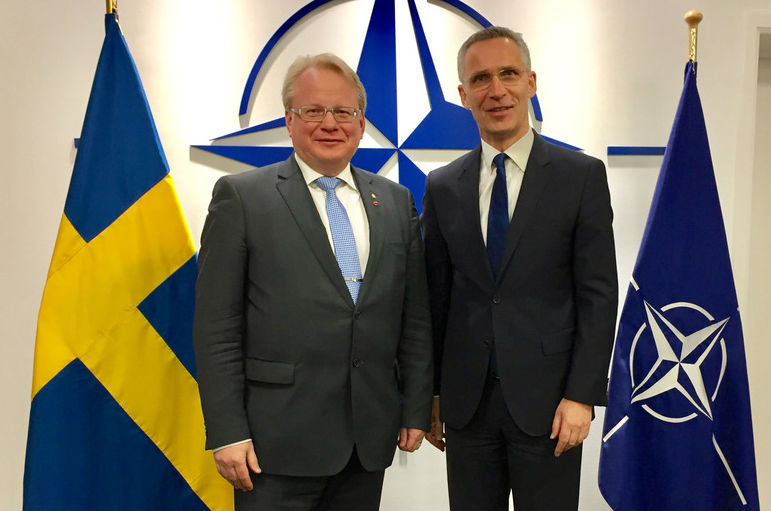 After the war in Ukraine, nobody laughed anymore.

Many, including some Scandinavians, had told themselves that the Georgian war was a unique situation—that it was “provoked” by the Georgians and that with the help of some dialogue, Russia would calm down and resume being a responsible actor.

We all know how that turned out. Far from being an anomaly, the Georgian war was a clear indication that Moscow does not respect the sovereignty of its neighbors—something that was further clarified in Ukraine. With their proximity to Russia and their importance for the defense of the Baltic states, the Nordic countries had better pay attention this time.

Already, they have all been on the receiving end of Russian threats. In 2015, Russia’s ambassador to Denmark said that Russia would aim its nuclear missiles at Danish ships if the country joined NATO’s missile defense system. Norway has noted a substantial increase in Russian military activity in the Barents Sea and the Arctic. Both Sweden and Finland have experienced territorial violations in the air and under water, as well as cyberattacks, disinformation campaigns, and a constant vilification in Russian state-run media.

Some observers in the United States take the Nordic countries as whole. In fact, these countries differ from each other substantially, particularly in terms of their security arrangements. Denmark is a member of both the EU and NATO. Sweden and Finland are members of the EU but not NATO. Norway is a member of NATO but not the EU. Norway and Finland share borders with Russia—in Norway’s case a small one and in Finland’s case a very long one.

The most interesting comparison is between Sweden and Finland. While neither country is in NATO, their approaches to Russia and national defense are different. After Russia’s seizure of Crimea and the war in the Donbas, Sweden became one of the most vocal supporters of enacting sanctions against Russia and standing by Ukraine. The country’s relations with Russia are at an all-time low and so is its defense spending. In fact, Sweden spends the least on defense of all Nordic countries as a percentage of GDP. Meanwhile, Finland retains one of the strongest territorial armies in Europe and supports the sanctions, but continues to communicate with Russia at the highest level. Finnish President Sauli Niinistö was the first European leader to fly to Sochi to meet Putin after the seizure of Crimea, which raised many eyebrows in Europe.

Sweden’s and Finland’s approach to NATO is also different. Finland openly claims that it retains the possibility of joining NATO as a tool of deterrence, while Sweden’s current Red-Green government rejects the idea of membership. Finland’s reasoning is grounded in the country’s experience during World War II, when it initially managed to fend off a Soviet attack. As its fortunes changed at the end of the conflict, it opted for neutrality to avoid becoming a Soviet satellite state. This has led the Finns to believe in their ability to handle their large eastern neighbor on their own, rather than place their trust in others. But Sweden’s neutrality was deliberately chosen and later became a cornerstone of the country’s “middle way” policy during the Cold War in an attempt to show solidarity with the developing world.

Whereas Finland’s neutrality is based on a hard security calculus, Sweden’s is grounded in identity. This also explains why Sweden continues its posture against Russia, supporting the rights of “small nations” like Ukraine in echoes of its activist past. François Heisbourg, president of the London-based International Institute for Strategic Studies, said recently at a seminar in Stockholm that the difference between Sweden and Finland is that “Finland is strategically careful and military robust. Sweden is strategically uncareful and not military robust.”

But Sweden just reintroduced conscription, and support for joining NATO is growing among the public. In Finland, it remains low, but that may change if Sweden should join the alliance. Putin has given NATO a new mission in the Nordic-Baltic region, and so has US President Donald Trump. The Scandinavians, firm believers in the liberal world order, have been spooked by the new president’s statements.

NATO members like Norway and Denmark seem to have gotten the message that Trump thinks in transactional terms. They have committed troops to the “tripwire” NATO battalions in the Baltic states as well as special forces to Iraq and Syria. This is the right way to go; it shows the United States that they are dedicated to both the defense of Europe and the fight against terrorism. The next step would be to show their willingness to meet NATO’s two percent goal at the upcoming summit in Brussels. If Trump wants to take credit for “the money pouring in,” let him. Regardless of what Nordic leaders may think of Trump’s statements and policies, the defense of Europe stands and falls with NATO.