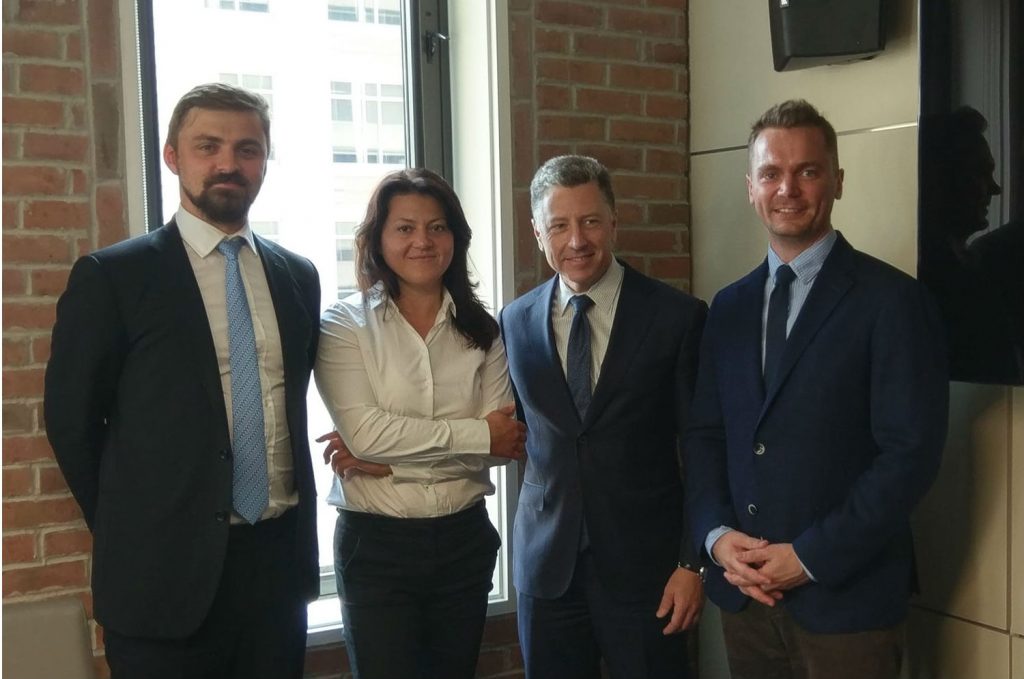 Bloomberg recently ran an in-depth story titled, “Four Years after Its Revolution, Ukraine Is Still a Mess.” I can’t argue with the headline, but it overlooks the many efforts and individuals who are still fighting to fix Ukraine. Three of those individuals engaged in the fight spent most of July in Washington, DC, as James Denton Transatlantic Fellows at the Center for European Policy Analysis, gaining skills and contacts that will help them continue to press for reform in Ukraine.

“No one is going to do it if I don’t act,” said Mykhailo Zhernakov, director of the Kyiv-based DEJURE Foundation and a Denton fellow. With spiky dirty blond hair and light blue eyes, Zhernakov is one of Kyiv’s most recognized experts on judicial reform. He’s a former judge who quit when the Euromaidan broke out, so he speaks with authority.

“I saw that you can do more for rule of law as an expert than by being on the bench,” Zhernakov said.

A board member at the Reanimation Package of Reforms, the coalition linking more than eighty nongovernmental organizations, Zhernakov has helped lead the fight to transform Ukraine’s courts.

He’s not happy with the outcome. President Petro Poroshenko promised to massively overhaul the country’s judicial system with much fanfare, but so far, the results haven’t been promising. “Much ado about nothing,” Zhernakov said.

The former judge turned activist was joined in Washington by journalist Elena Tribushnaya and Deputy Minister of Justice Sergiy Petukhov as Denton Transatlantic Fellows from Ukraine. The fellowship also brought leaders from the Czech Republic and Hungary to DC.

Zhernakov, thirty-two, praised the fellowship for giving him an opportunity to meet Ambassador Kurt Volker, the US special negotiator on Ukraine, as well as top directors at the United States Agency for International Development and politicians on Capitol Hill. While Zhernakov has been to Washington before, he said the fellowship allowed him more time to have longer meetings and go into greater depth.

Zhernakov worries about the outcome of the 2019 elections. In March, Ukraine elects a new president, and a new parliament will be elected in the fall. He predicts an “ice age” if Ukrainians elect a populist president next year. Much of the progress that has been made over the last four years will be rolled back, and civil society won’t be as effective, he says.

Tribushnaya, thirty-nine, is also concerned about the elections. She says that 2019 will be the year of populism and that there won’t be any great reform breakthroughs. “People are tired of waiting for some breakthroughs, but as history shows, Ukrainians can wait, wait, wait—and then explode,” she said.

In spite of the gloomy prognosis, Tribushnaya reminds me that investigative journalists are breaking stories about corrupt officials that are being referred to the National Anticorruption Bureau of Ukraine.

She’s the chief editor of Channel 24, a television station owned by the family of Lviv Mayor Andriy Sadovyi and influential media manager Roman Andreyko that is normally rated in the top three for Ukrainian news channels, according to Nielsen’s TV ratings. She has been on the job for a year now.

Tribushnaya went from supervising a team of six at the well-regarded magazine Novoe Vremya to a team of sixty at Channel 24. “I never watched TV before,” she said with a laugh. But the station wanted someone with vision who knew the substance of the reform debates, so she got the job.

Tribushnaya likes to master a challenge and then move on. She was a print journalist at Korrespondent for seven years; when President Viktor Yanukovych bought the magazine in 2013, she quit, along with chief editor Vitaliy Sych and most of the team.

“We thought we’d have no place to work,” she said. During the Maidan without a professional perch to write, she took to writing on Facebook, as did many Ukrainian journalists at the time.

After the Maidan, Sych set up Novoe Vremya magazine and a website. Some consider it the gold standard in Ukrainian journalism. It’s fearless, irreverent, and feared by the authorities. The magazine is a project of Tomas Fiala, who owns the investment company Dragon Capital; Fiala doesn’t interfere in content or the editorial line.

Journalism isn’t an easy profession in Ukraine. She hasn’t faced harassment herself, but the situation is difficult for journalists today. She points to the case of Denys Bihus, an investigative journalist with Nashi Groshi (Our Money), who claims that the SBU has been following his staff for a week.

Television is king in Ukraine, and oligarchs own the airwaves. However, Channel 24 is giving space to a number of activists and reform-minded politicians, including Sergiy Leshchenko, Mustafa Nayyem, and Yegor Soboliev. The station also shows Oleksandra Ustinova from the watchdog Anticorruption Action Center and broadcasts Radio Svodoba’s hard-hitting show Schemes, about corruption in Ukraine.

Tribushnaya said that showing the real owners of television stations is the only way to change the oligarch’s control over the media. The average viewer doesn’t know who the owner is, she said.

Petukhov got his job as deputy minister of justice through an open competition. The slot would normally have been reserved for a political appointee.

The thirty-three-year old lawyer from Donetsk worked on the bilateral agreements that allowed the Netherlands full jurisdiction over the MH17 case, in which Russian-backed separatists shot down a civilian airliner over Ukraine in 2014.

He has also been praised for protecting reforms along the way. In 2016, the Kyiv Post credited him with protecting the e-declaration system, which requires state officials to disclose their income and assets online.

While Petukhov has been to Washington many times before, he praised the Denton fellowship for giving him time and opportunity to exchange views with think tanks, whose staff are connected but “tend to be more open” than politicians.

All three return to Kyiv brimming with ideas and new energy. Zhernakov, for example, has brought back a new idea about how to tame Ukraine’s notorious oligarchs through a new legislative push, and wants to put a full-time staff member in Washington to better communicate Ukraine’s ongoing reforms.

The fight to transform Ukraine may have slowed to a simmer, but these three Ukrainians and thousands of others are committed for the long haul.