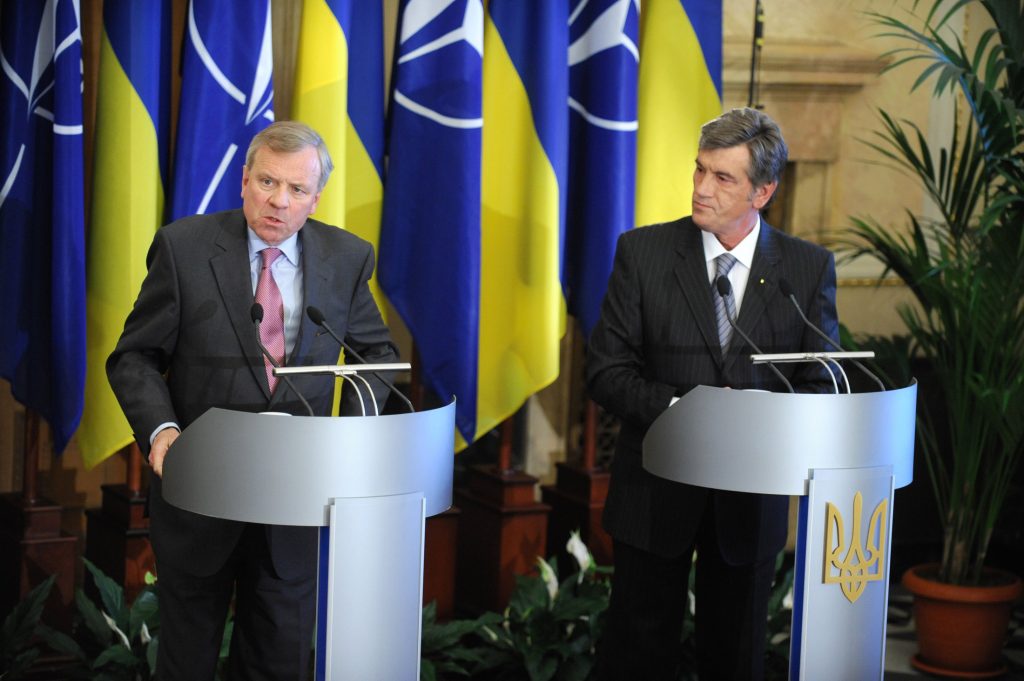 Did NATO Provoke a War By Trying to ‘Take’ Ukraine From Russia?

Much Western thinking about the causes of the Russo-Ukrainian War is rooted in a myth. It posits that the West—or, more specifically, NATO—attempted to wrest Ukraine from Russia’s sphere of influence, thereby forcing Vladimir Putin to defend Russia’s legitimate strategic interests by going to war with Ukraine.

The logic is impeccable. The only problem is that there isn’t a shred of truth to this claim.

Was the West determined to integrate Ukraine into its institutions? Until the Maidan Revolution broke out in late 2013, Ukraine “fatigue” had characterized Western policy since about 2008, when the government of then-President Viktor Yushchenko lost the reformist zeal it had inherited from the 2004 Orange Revolution. Even before that, Western policymakers never talked of including Ukraine in the European Union. Indeed, the EU’s Eastern Partnership program and its offer of an Association Agreement to Kyiv were supposed to placate Ukraine without promising it even the distant prospect of membership in the EU. The reluctance to offer that prospect remains unchanged.

Has NATO Been Active—or Passive?

Was the West determined to transform Ukraine into a pro-Western democracy? The United States and Europe pumped several billions of dollars into Ukrainian civil society projects since 1991, while remaining indifferent to the Leonid Kuchma regime’s slide toward authoritarianism in the late 1990s, the abandonment by Yushchenko’s “Orange government” of its democratic reform agenda, and Viktor Yanukovych’s establishment of a full-fledged authoritarian regime in 2010-2013. Some Western policymakers supported the Maidan Revolution rhetorically and insisted that Yanukovych seek a compromise with the democratic revolutionaries; but most did not. No Western state actually provided any material assistance to the Maidan. And no Western presidents or prime ministers called on Yanukovych to step down during the revolution: quite the contrary, they travelled to Kyiv in late February 2014 with the express purpose of saving him. Once he abandoned his office, many Western policymakers welcomed his move—but that was after, and not before, the fact.

Did NATO ever push Ukraine to join the alliance? The answer is no. And for good reason: It was (and still is) unready to make the commitment, under its Article 5, to rush to Ukraine’s assistance in case of an attack by Russia. Three months after the Yushchenko government formally requested a “membership action plan” as a first step toward joining NATO, the alliance’s North Atlantic Council in April 2008 issued the vaguest “welcome” possible of “Ukraine’s and Georgia’s Euro-Atlantic aspirations for membership.” While NATO declined to repudiate the “Open Door” principle it had declared a decade earlier (with the less vulnerable and more viable Poland and Czech Republic in mind), it also dampened the Yushchenko government’s ardor, declining to issue the requested membership plan and promising instead to talk about it.

Did Ukraine ever come close to joining NATO? Of course not. The alliance’s polite and vague 2008 “welcome” effectively slow-walked the idea until, two years later, Yanukovych won election in Ukraine. He quickly reduced Kyiv’s stated ambition from “membership” to a maintenance of its existing “partnership” with NATO. The alliance just as quickly agreed, and Ukraine’s relationship with NATO disappeared altogether from Kyiv’s policy agenda. Public opinion surveys in Ukraine consistently showed that no more than a fifth of the population ever desired NATO membership. That changed only after the outbreak of Russia’s war with Ukraine in 2014, when the percentage of NATO supporters quickly exceeded half.

Did Putin seize the Crimea because of the West’s desire to transform Ukraine into its bastion? From the start, Putin has explained the seizure in terms of some putative need to protect Russians from the “fascist junta” in Kyiv and to bring “sacred” Russian territory back into the fold. He began invoking the Western threat only after war with Ukraine had broken out and the West chose to support Kyiv. The fact is that Putin unleashed war against Ukraine for the same reasons that Saddam Hussein unleashed war against revolutionary Iran in 1980: to prevent revolutionary contagion, to punish the revolutionaries, and to take advantage of their weakness to make territorial gains.

Supporters of the view that NATO enlargement provoked Russia are right about one thing. Enlarging NATO in 2004, just as Putin was consolidating his authoritarian regime and developing visions of imperial expansion, created an impossible security conundrum for Ukraine. NATO enlargement effectively sent Russia an unmistakably strong signal: that Ukraine was outside the West’s security interests and thus was fair game for Russia.