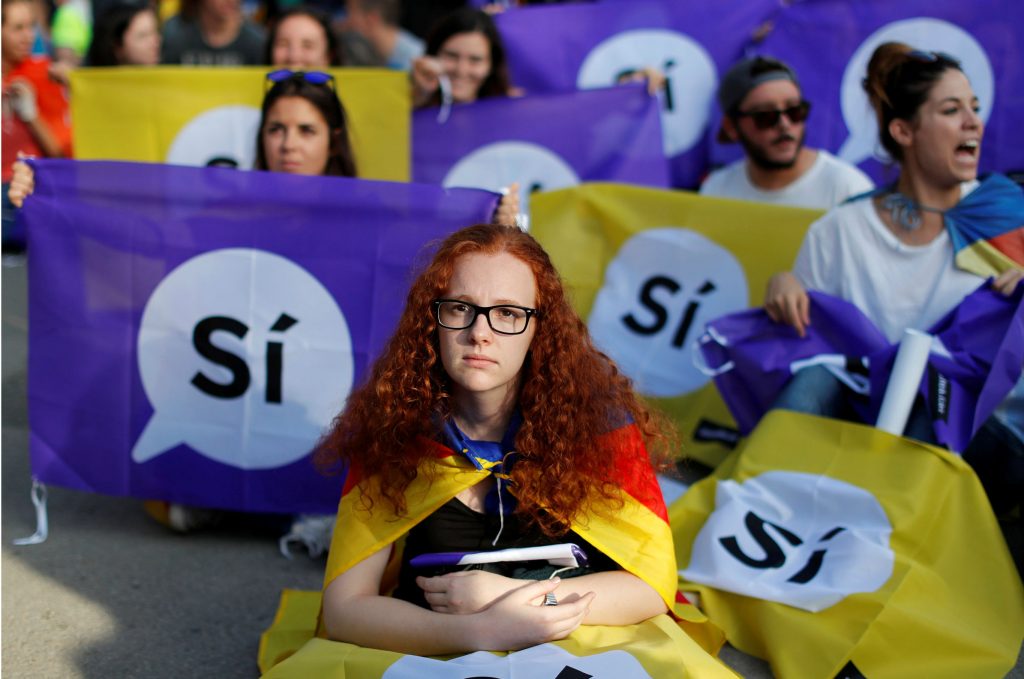 A Bloomberg piece in October titled “Why Catalonia Will Fail Where Crimea Succeeded” by Russian writer Leonid Bershidsky is an example of moral equivalence run amok.

He compares two completely unrelated events—referenda in Crimea and Catalonia—as though they bear any similarity, and as though they carry the same moral weight.

“The Catalan situation draws comparisons with that in Crimea in 2014, and they are not as easy to dismiss as Catalan independence supporters might think,” he wrote.

The only link is that questionable votes were staged in both jurisdictions. Any further comparisons conflate two historical events as dissimilar as the leadership styles of Stalin and Gandhi.

The inconvenient backdrop to Crimea’s referendum in favor of joining Russia was violence. Its institutions had just been occupied, its federal government was being dismembered by the Russian military, opponents were murdered, its local press was shut down, and its populace was intimidated by the presence of soldiers with Kalashnikovs on every street corner.

Even so, Bershidsky writes: “Ukraine contends that the March 16 referendum, in which Crimea voted to secede from Ukraine and join Russia, took place at gunpoint,” he wrote. “That bit, however, is untrue. Neither the ‘little green men’ nor uniformed Russian soldiers were present at polling stations during the vote. There was no armed pressure on Crimeans, not even on the indigenous Crimean Tatars, who didn’t back the secession and mostly abstained from voting, to show up or to fill in ballots a certain way.”

This statement, concludes Jakub Janda with the European Values Think Tank in Prague, shows that “the author supports pro-Kremlin talking points, then lies.”

Bershidsky also repeats Russian propaganda as though it were fact. “In Crimea, 95.6 percent of those who cast votes backed joining Russia. In Catalonia, some 90 percent did, according to local authorities,” he wrote. “In Crimea, the official turnout topped 83 percent while in Catalonia it reached about half that.”

Such figures were disputed by a report posted on a Russian government website for an agency called Russia’s Council on Civil Society and Human Rights which said the voter turnout was a maximum of 30 percent and of these, only half voted for annexation, meaning only 15 percent of Crimean citizens voted to join Russia. The report was taken down quickly after it was posted.

Bershidsky cites Crimea figures that are “simply false,” said John Herbst, a former US ambassador to Ukraine. “The gold standard of disinformation work is to have one’s artifice passing as fact in major Western media,” he wrote. “Someone in the Kremlin must have been knocking down a vodka or two when reading Bershidsky’s column on Crimea and Catalonia.”

Throughout the piece, Bershidsky deploys another disinformation technique which consists of making outrageous assertions, then walking them back as if to provide the appearance of balance.

For instance, after trotting out unsupportable voting facts in both cases he then writes “but these numbers are equally meaningless because there was no way to ascertain the voting was being held according to any sensible rules.”

In addition, he maintains that a non-violent vote was why Crimea went to Russia then states that the main reason was because the Ukrainian government, unlike Spain, was too weak in Crimea and couldn’t keep secessionists in its eastern region in line.

But Herbst says that’s untrue. “Ukraine had no problem administering its laws in Crimea until Russian troops intervened. And in August of 2014, Ukraine was on the verge of taking back the entire Donbas from the Kremlin-run revolt when Russian troops entered Ukraine and dealt Kyiv’s forces a decisive defeat.”

For these and other reasons, Bloomberg should walk back the entire article.

Catalonia’s vote was about a cultural and aspirational movement inside Spain.

Clearly, the only linkage between Crimea and Catalonia may be the invisible hand of the Kremlin and its confederates who broke up Ukraine and are interested in destabilizing and atomizing Spain and other western nations.

Bershidsky’s piece is fallacious and confuses cultural ambition with violent acquisition, and bullets with ballots.

That’s what this piece is all about. It’s about misrepresenting what Russia did to Ukraine to bolster a bogus comparison.

Its publication insults Ukrainians and represents another example of Russia’s assault on its neighbors, western values, institutions, and media as well as on truth itself.

Image: People wait to watch the delayed session of the Catalan regional parliament on a giant screen at a pro-independence rally in Barcelona, Spain, October 10, 2017. REUTERS/Gonzalo Fuentes