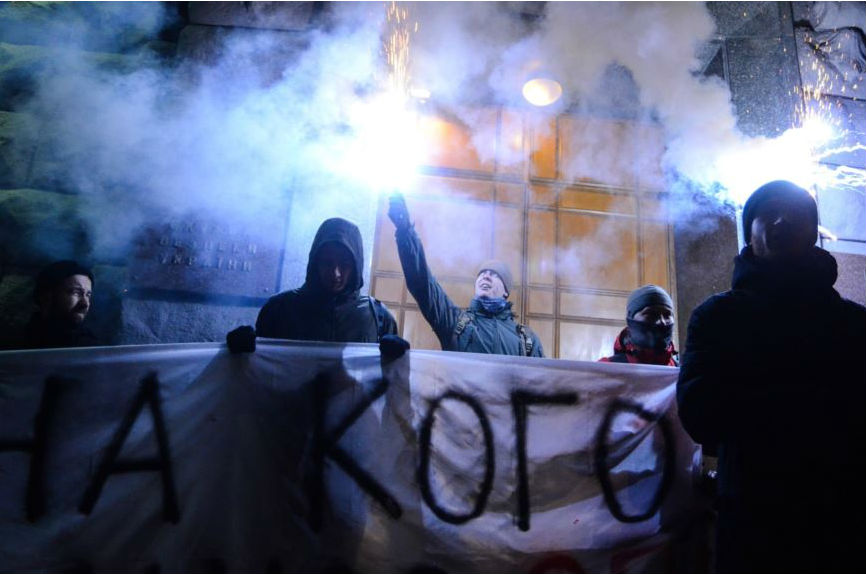 It sounds like the stuff of Kremlin propaganda, but it’s not. Last week Hromadske Radio revealed that Ukraine’s Ministry of Youth and Sports is funding the neo-Nazi group C14 to promote “national patriotic education projects” in the country. On June 8, the Ministry announced that it will award C14 a little less than $17,000 for a children’s camp. It also awarded funds to Holosiyiv Hideout and Educational Assembly, both of which have links to the far-right. The revelation represents a dangerous example of law enforcement tacitly accepting or even encouraging the increasing lawlessness of far-right groups willing to use violence against those they don’t like.

Since the beginning of 2018, C14 and other far-right groups such as the Azov-affiliated National Militia, Right Sector, Karpatska Sich, and others have attacked Roma groups several times, as well as anti-fascist demonstrations, city council meetings, an event hosted by Amnesty International, art exhibitions, LGBT events, and environmental activists. On March 8, violent groups launched attacks against International Women’s Day marchers in cities across Ukraine. In only a few of these cases did police do anything to prevent the attacks, and in some they even arrested peaceful demonstrators rather than the actual perpetrators.

International human rights groups have sounded the alarm. After the March 8 attacks, Amnesty International warned that “Ukraine is sinking into a chaos of uncontrolled violence posed by radical groups and their total impunity. Practically no one in the country can feel safe under these conditions.” Amnesty International, Human Rights Watch, Freedom House, and Front Line Defenders warned in a letter that radical groups acting under “a veneer of patriotism” and “traditional values” were allowed to operate under an “atmosphere of near total impunity that cannot but embolden these groups to commit more attacks.”

To be clear, far-right parties like Svoboda perform poorly in Ukraine’s polls and elections, and Ukrainians evince no desire to be ruled by them. But this argument is a bit of “red herring.” It’s not extremists’ electoral prospects that should concern Ukraine’s friends, but rather the state’s unwillingness or inability to confront violent groups and end their impunity. Whether this is due to a continuing sense of indebtedness to some of these groups for fighting the Russians or fear they might turn on the state itself, it’s a real problem and we do no service to Ukraine by sweeping it under the rug.

The anti-democratic ideology these groups espouse runs counter the values of the Euromaidan. Ukrainians took to the streets to confront former President Yanukovych because they wanted to live in a democratic state where everyone is held accountable. Honoring the values of Euromaidan therefore requires Kyiv to protect all citizens, regardless of ethnicity, sexuality, or political views.

Far-right impunity also represents a dangerous threat to Ukraine’s statehood. It’s been long understood in Western political and legal philosophy that the state must have a monopoly on violence in order to be a legitimate state, and when a state loses this monopoly, society starts to break down. Ukraine’s certainly nowhere near this point, but it shouldn’t take any chances either.

Kyiv should understand that turning a blind eye toward all of this activity risks damaging Ukraine’s international reputation. The Kremlin won’t hesitate to cynically use the far right’s activities to push its false claim that Ukraine is a hornet’s nest of fascists, while Kyiv could also lose support in the West for its inaction.

Luckily, the authorities still have time to nip things in the bud if they act now. President Petro Poroshenko could start by enacting a “zero-tolerance” policy on unsanctioned vigilantism and direct authorities to cleanse law enforcement agencies of far-right sympathizers such as Sergei Korotkykh, who heads the National Police’s head of security for sites of strategic importance.

Government agencies at all levels should also stop cooperating with far-right groups. In addition to the Youth Ministry’s problematic funding, C14 and a Kyiv city district recently signed an agreement allowing C14 to establish a “municipal guard” to patrol the streets; three such militia-run guard forces are already registered in Kyiv, and twenty-one operate in other cities as well. And C14’s dangerous leader Yevhen Karas even boasts openly about cooperating with the Security Services of Ukraine (SBU). All this needs to end and state officials found to be cooperating with extremists must be removed.

Finally, it’s important that Poroshenko and other senior government officials publicly condemn extreme organizations like C14 and speak out in support of marginalized groups. As three straight years of incident-free Kyiv Pride events demonstrate, the state certainly possesses the capability to deter far-right vigilantism if it wants to. However, the authorities are clearly aware of Kyiv Pride’s international visibility and the real test will come once the bright lights disappear.

It won’t be easy to end far-right impunity, but the government must summon the will to do so now.