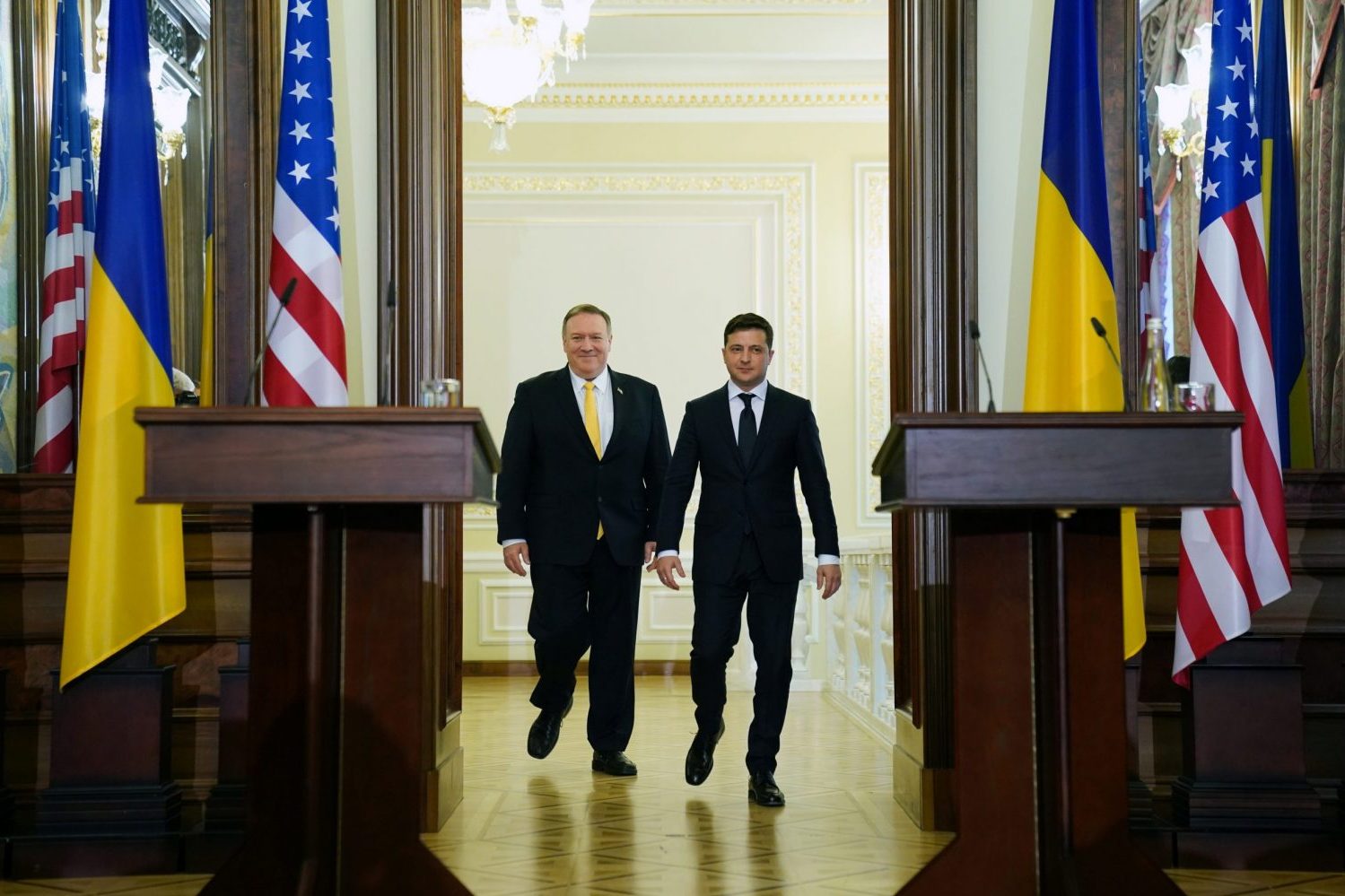 2019 was an exceptionally turbulent year for US-Ukraine ties, but there are signs the relationship is getting back on track. US Secretary of State Mike Pompeo came to Kyiv on January 31, becoming the highest-ranking US official to visit Ukraine in over two years. While he did not offer any major breakthroughs, Secretary Pompeo’s presence itself was a welcome sign following months of impeachment-related speculation and innuendo that succeeded in damaging trust on both sides. With the impeachment drama now apparently nearing its conclusion, how will relations develop between Ukraine and the United States?

Pompeo’s recent visit was particularly eagerly awaited in Kyiv as it had already been delayed twice. The initial postponement in November 2019 left many in Ukraine frustrated as they had been hoping for a strong signal of continued American support prior to President Zelenskyy’s first face-to-face meeting with Vladimir Putin in Paris in early December. The second delay came in early January 2020, when unexpected events in Iraq forced a last-minute rescheduling. These two postponements, together with the imposing impeachment backdrop, amplified the significance of Pompeo’s eventual arrival in the Ukrainian capital last week.

Preparations for the visit were not ideal, with Pompeo bristling at Ukraine-related questions during an interview with NPR host Mary Louise Kelly on the eve of the trip and subsequently asking her, “Do you think Americans care about Ukraine?” This suggestion of American indifference played directly to Ukrainian fears over the reliability of the country’s most important ally, but Pompeo subsequently did much to reassure Ukraine that US support for the country remains unchanged. While his visit to Ukraine did not yield any major policy results, it succeeded in underlining the message that the core character of bilateral relations has not altered. “The United States sees that the Ukrainian struggle for freedom, democracy, and prosperity is a valiant one. Our commitment to support it will not waver,” the Secretary of State commented in Kyiv. This is exactly the kind of message Ukrainians were hoping to hear.

After the rollercoaster ride of recent months, what is next for US-Ukraine ties? Most analysts believe we are unlikely to see any repetition of the pressure applied to Ukraine by the White House that led to impeachment proceedings. These attempts to coerce Ukraine caused huge problems for President Trump domestically. He is unlikely to seek a sequel.

Instead, Trump’s each and every step pertaining to Ukraine will be under the microscope from now on. Much as Trump’s vision of a “grand bargain” with Moscow during the early years of his presidency ran aground amid a lengthy investigation into 2016 campaign ties to Russia, any destructive impulses towards Kyiv are now likely to be similarly curtailed.

Meanwhile, his backchannel of operators dealing with Ukraine has been exposed, with some of those involved already indicted or under investigation. There remain some politicians in Kyiv itself who are willing to contribute to narratives about the Bidens or Ukrainian “interference” in the 2016 US presidential election campaign, but they are fairly marginal figures. Crucially, their services are not going to be required without a push from the White House.

Despite this positive outlook, President Trump’s apparently negative attitude towards Ukraine is unlikely to change. This is rooted in his belief that Ukraine backed his opponent during the 2016 election campaign. Ukrainian officials have worked hard over the past three years to overcome this obstacle, but numerous comments attributed to the US President by the media during recent impeachment-related coverage suggest he continues to hold a grudge against Ukraine. He will also long remember the country’s central role in impeachment proceedings that threatened to derail his presidency.

The good news for Kyiv is that President Trump does not determine Ukrainian policy alone. If anything, he might actually prefer to distance himself. Bipartisan Congressional support for Ukraine remains intact, and it should stay this way throughout 2020. Congress has traditionally been the most important driver of American support for Ukraine. It passes the laws designed to aid Ukraine and allocates assistance. There is no reason to believe this bipartisan stance is in any serious danger. While some Republicans have echoed the presidential line regarding Ukrainian “interference” in the 2016 election, this is of relatively little significance compared to the consistent and overwhelming bipartisan backing from Congress that Ukraine continues to receive.

Beyond the headlines, the experience of the past year has in many ways actually emphasized the depth of US support for Ukraine. This includes Congress and extends to the defense, national security and intelligence establishments. There is broad recognition that US support for Ukraine is in America’s interests, along with a sense of continuity that transcends recent tensions. Indeed, throughout the past year of White House pressure on Ukraine and subsequent impeachment drama, there have been numerous examples of officials pushing back against steps that threatened to damage ties with Ukraine.

Much of day-to-day US policy towards Ukraine remains in the hands of people who believe in the need to assist Ukraine. This mirrors attitudes in the mainstream US media and among a majority of Americans. There is no reason to expect any change in this consensus during 2020. Welcome steps would include appointing a new US ambassador to Kyiv and scheduling President Zelenskyy’s promised White House visit. However, it is already clear that the long-term partnership between the two countries remains fundamentally intact.