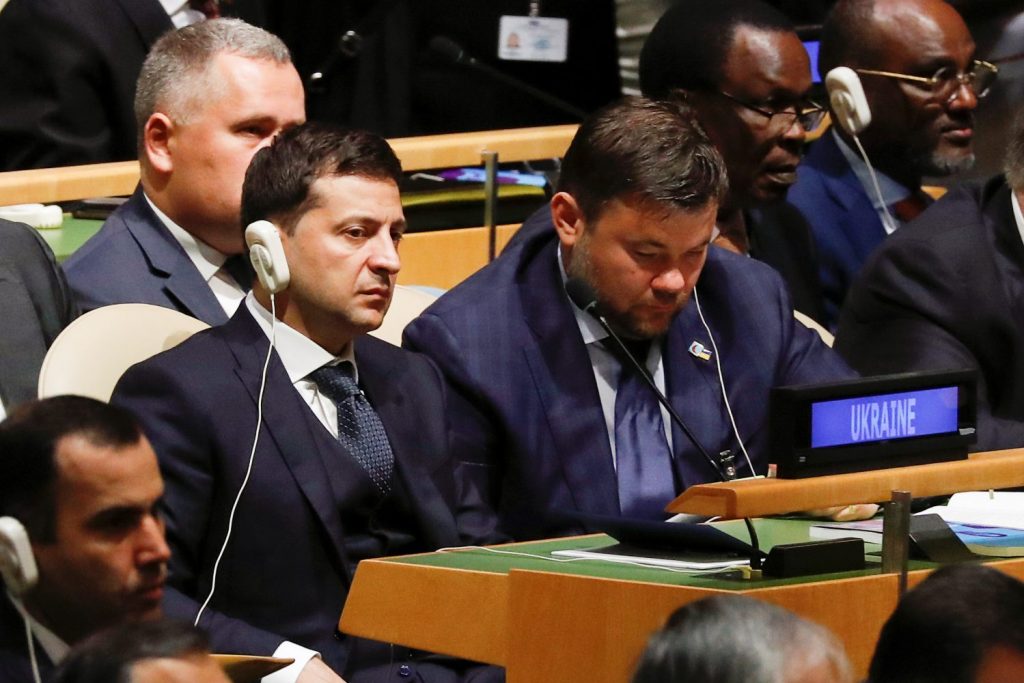 Ukraine is at the center of a US domestic political crisis that may impact the American presidency and weaken Ukraine at a critical moment. As Ukrainian President Volodymyr Zelenskyy comes to the United States this week for the opening of the UN General Assembly and his first meeting with US President Donald Trump, he has a tough task ahead: he must not get pulled into the partisan fight, while convincing Trump to back Ukraine’s position for peace.

In October, Ukraine, Russia, France, and Germany are expected to meet in Paris to hammer out a peace deal to end a war that Russia started five years ago, killing 13,000 Ukrainians, seriously wounding thousands, and displacing another 1.6 million in eastern Ukraine.

Ukraine is at risk of coming to the table with a weak hand, unless the United States throws its full support behind it and encourages Europe to do the same. Germany and France see Zelenskyy’s political inexperience as an opportunity to achieve a breakthrough in the Normandy Format talks, hoping he will compromise on issues when his predecessor would not.

During a recent discussion at the Yalta European Strategy annual meeting in Kyiv, Ukraine, with Leonid Kuchma, Ukraine’s former president and lead negotiator in the Minsk Agreements, he sensibly said “Let’s comply with the Minsk accords. Security comes first. You need to pull out the troops, pull out the heavy weaponry, give us back the border, and then we will hold a free election.” The formula for peace is clear. Unfortunately, Kuchma was not optimistic about the much-anticipated Normandy Format meeting. “Zelenskyy will have a very hard time—it will be one against three people,” he predicted.

Last month’s successful prisoner exchange between the Kremlin and Kyiv renewed hope that peace might finally be achievable. But Moscow’s actions show that there is no willingness by Russia to find a lasting solution. Putin’s objectives are straightforward. He wishes to control Ukraine as part of Russia’s sphere of influence by either permanently inserting a Russian-controlled regional government in Ukraine or by continuing to destabilize Ukraine and turn it into a failed state through his ongoing war.

The challenge is not whether the Minsk Agreements should be implemented but how they are implemented. Russia wants Ukraine to recognize special status for the Donbas region and hold immediate elections that would have the Russian-controlled mercenaries become members of Ukraine’s parliament. Ukraine and its allies have always held the position that elections will be held in the Donbas only after the Russian troops and mercenaries together with their weapons leave the territories and Ukraine regains control over the Russian-Ukrainian border, IDPs are allowed to return to their homes, and several months passes and rebuilding begins.

Earlier this month in Berlin, German interlocutors who are directly involved in the Normandy Format peace discussions, outlined their peace proposal. Astonishingly, they proposed that Ukraine should agree to Russia’s terms and hold elections in the occupied territories prior to any troop withdrawal or return of the half the population who fled because of the occupation.

The Germans proposed that these elections be supervised by the Organized for Security and Co-operation in Europe and the Russian forces would be contained to their barracks. This is a farcical proposal. When the OSCE invariably declares that the elections failed to meet international standards, the new leaders will face no recourse from the OSCE, as has happened in dozens of elections throughout the former Soviet Union.

The “peace at all costs” formula will legitimize the foreign occupation forces in Ukraine, create a lasting divide in the country, and pull Ukraine away from its path toward EuroAtlantic integration, which is exactly what Putin wants. Ukraine cannot agree to elections until security for its citizens can be guaranteed, real political discourse is allowed, and those residents that were forced to flee are able to return and vote.

The United States, Germany, and France must not force Ukraine’s hand in accepting any form of peace deal that will compel Ukraine to hold elections while the occupied territories in the Donbas remain a police state under Russian control. Otherwise, these “allies” will permanently destabilize Ukraine with a Russian-controlled enclave in eastern Ukraine. A Putin-led peace plan will fracture Ukraine beyond repair.

If anyone’s hand must be forced, it should be Vladimir Putin’s.  The United States, Canada, EU, and their allies must continue to increase sanctions against Russia and support for Ukraine. Buckling to Putin will further embolden him and prove that aggression works, which will have grave consequences far beyond Ukraine.

Paul Grod is president of the Ukrainian World Congress. He tweets @PaulMGrod.