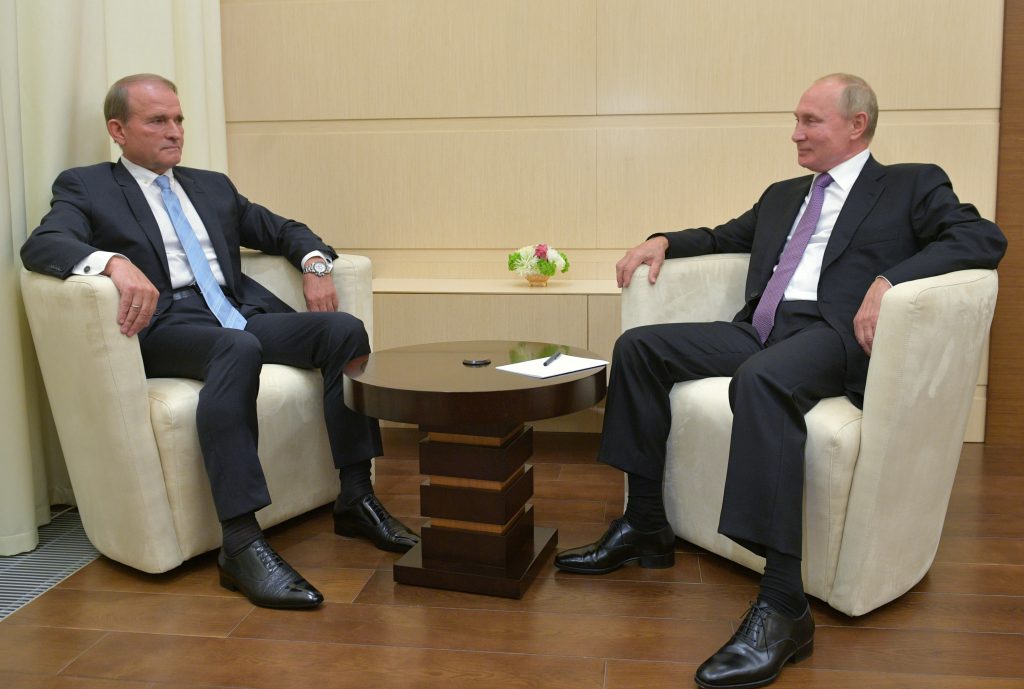 On the morning of February 20, one of Ukraine’s most powerful men awoke to find himself on a sanctions list issued by his own country. Sanctioning one of your own is a serious step that should only be considered in the most unusual and extreme of circumstances. This is exactly what we currently face in Ukraine.

Viktor Medvedchuk may not be a name that is particularly well-known to most Americans. In Ukraine, however, he is a towering figure. A businessman, politician, and TV mogul, Medvedchuk is co-chairman of Ukraine’s largest pro-Russian political party. He is a personal friend of Russian President Vladimir Putin, who is godfather to Medvedchuk’s daughter. He has also been the driving force behind three of Ukraine’s most fervently pro-Kremlin TV stations.

All this might be considered acceptable in a country that was not in a state of war, or one that was not in the midst of delicate peace negotiations. Sadly, today’s Ukraine is in exactly this predicament. Medvedchuk and his fifth column activities have been a thorn in the side of peace efforts ever since the conflict began in 2014.

Shocking new evidence of the Medvedchuk family’s treachery has recently emerged. Medvedchuk’s wife, along with the spouse of a close ally, were found to be channeling profits from their Russia-based oil facility towards the breakaway Kremlin-proxy “republics” in eastern Ukraine. This activity qualifies as the financing of terrorism under Ukrainian laws. For that reason, Medvedchuk, his wife, and their companies are now sanctioned.

Ukrainian President Volodmyr Zelenskyy was elected by a landslide majority in spring 2019 to deliver peace and a settlement to the conflict. We have come to the conclusion that as long as Medvedchuk openly subverts Kyiv’s efforts for a peaceful resolution, as long as he is able to seed discord, promote the Kremlin’s agenda, and spread disinformation in Ukraine, our country will remain at war.

Quite rightly, the administration of US President Barack Obama placed Viktor Medvedchuk on their own sanctions list immediately following the illegal annexation of Crimea in 2014. Unfortunately, Ukrainian President Petro Poroshenko did not follow suit. Instead, he agreed with President Putin to use Medvedchuk as an informal negotiator in talks with the Kremlin, despite knowing that Medvedchuk was actively trying to undermine Ukraine’s agenda.

We are now taking action to put an end to this state of affairs. In line with Ukrainian legislation, we have recently taken three TV channels off the air that were broadcasting pro-Russia disinformation. All three channels were linked to Medvedchuk.

From disinformation campaigns to the hacking of state institutions, the United States has first-hand experience of the kind of hybrid aggression Ukraine has been facing in recent years. To combat these tactics, Ukraine is currently working to set up a state disinformation unit to detect, monitor, and mitigate foreign-led campaigns.

Our intelligence agencies continue to uncover and neutralize cyber threats, while also regularly arresting foreign agents operating illegally in the country. We are committed to cooperating closely with our American allies and combining our efforts to tackle disinformation risks and other hybrid threats.

Under President Zelenskyy’s leadership, Ukraine has proven its relentless determination to deescalate the military situation in eastern Ukraine and save lives. We have completely overhauled the approach adopted by the previous administration towards the conflict.

In 2018, 122 Ukrainian servicemen were killed in eastern Ukraine. As a result of our efforts, the figure last year fell to 50. Tellingly, the only serious escalation in violence against Ukrainian forces since we implemented our new approach took place in recent weeks, shortly after the three TV stations linked to Medvedchuk were taken off the air.

Our ultimate objective is to reduce casualty numbers to zero, regain all Ukrainian territories that are currently occupied, and secure a long-lasting peace. We are confident that we will be able to achieve this overall goal with the help and support of our US partners.

Looking ahead, we have identified three priorities for US-Ukraine engagement.

Firstly, it is vital for the US to become fully engaged in the negotiation process under the Normandy and Minsk frameworks. A coordinated approach between the US, the EU, and Ukraine is indispensable.

Secondly, we must increase military cooperation between US and Ukraine in order to further raise the cost of any new military aggression. We need a clear signal from the United States concerning Ukraine’s NATO membership.

Thirdly, the United States should consider implementing a new and comprehensive sanctions regime until the war in Ukraine ends. This must remain in place until eastern Ukraine and Crimea return fully to Ukrainian control.

Any new sanctions should also give due consideration to Nord Stream 2, a pipeline project that threatens to seriously damage the Ukrainian economy and jeopardize energy security in Europe.

Ukraine and the United States are currently facing a civilizational choice: do we stand together to defend democracy, truth, and freedom, or do we yield to an authoritarian power which aggressively interferes in Western domestic affairs and invades other countries at will?

We in Ukraine are committed to working hand in hand with the new US Administration to defend our shared democratic values and the liberal world order, which remains the cornerstone of peace, freedom, and prosperity.