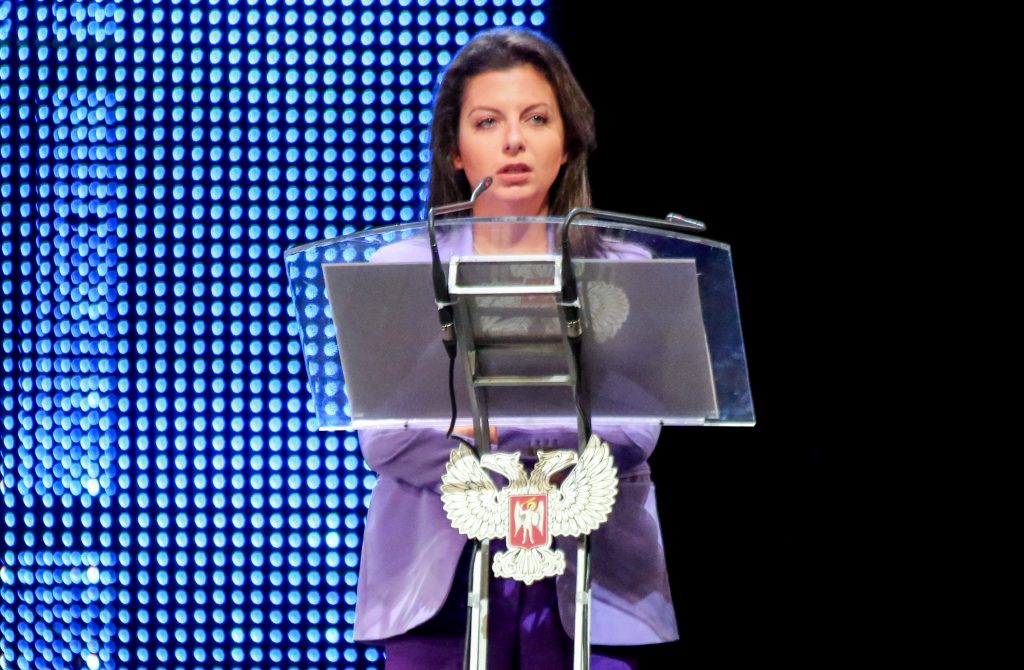 Simonyan’s words carry significant weight. As chief editor of the Kremlin’s flagship television network RT (formerly Russia Today) and international news agency Rossiya Segodnya, she occupies a position close to the summit of Putin’s propaganda apparatus and is widely recognized as a trusted regime insider. While Simonyan does not officially speak for the authorities, it is highly unlikely she would have traveled to the war zone in eastern Ukraine and made such provocative statements without having first received a nod of approval from the Kremlin.

Simonyan’s call for the annexation of eastern Ukraine’s Donbas region was not an isolated outburst. Since December 2020, Russian infowar efforts have increasingly focused on the so-called Russian Donbas doctrine. This initiative aims to provide historical justification for Moscow’s claims to eastern Ukraine by emphasizing the region’s longstanding ties to Russia.

Such efforts are not only at odds with Russia’s role in the Minsk Peace Process. They also directly contradict Moscow’s official commitment to supporting the reintegration of the Donbas region into Ukraine.

The Russian Donbas doctrine is the latest example of the Kremlin’s enthusiasm for rewriting history in order to suit its contemporary political requirements. This tendency to distort the past has been central to the information war that has accompanied Russian aggression against Ukraine.

When Russian forces first seized Crimea in spring 2014, Moscow propagandists were quick to declare that the Ukrainian peninsula had “always been Russian.” In reality, Crimea is an ancient land with a recorded history stretching back almost three thousand years that includes extended periods as part of the Byzantine Empire, Golden Horde, and Ottoman Empire. Meanwhile, Russia’s involvement in Crimea began comparatively recently in the late eighteenth century. Clearly, it is nonsensical to claim that this highly cosmopolitan geopolitical crossroads has “always been Russian.”

With Crimea still under Russian occupation, it is not hard to understand why many are now alarmed to see Moscow propagandists declaring that eastern Ukraine’s Donbas region has also “always been Russian.”

Once again, Moscow’s claims are accompanied by a convenient historical narrative that has been carefully rewritten to meet the Kremlin’s present needs.

Regardless of whether the authors were Ukrainian, Russian, or Western, most traditional academic histories of the Donbas have tended to focus on three key aspects of the region’s early development. These accounts typically begin with details of how the Donbas was first colonized by Ukrainian Cossacks and peasants, who moved into the borderland regions previously known as the “Wild Fields” following the gradual retreat of the Crimean Khanate.

Next came waves of colonization from different parts of Europe and beyond. This was followed by an extended period of intensive international involvement that fueled the industrialization of the region throughout the second half of the nineteenth century.

Western investors and industrialists were instrumental in the development of the Donbas, bringing vital capital and technologies to the region. The most famous of these was Welsh businessman John Hughes, who founded Donetsk in 1869. The city was called “Hughezovka” in his honor until 1929, when it was renamed “Stalino” by the Soviet authorities.

The Russian Donbas doctrine outlined in Donetsk on January 28 made barely any mention of these crucial factors in the history of eastern Ukraine. Instead, the discussion focused almost exclusively on Russians who played prominent roles in the region’s growth.

There was no mention of the systematic Russification policies adopted during both the Czarist and Soviet eras, and no room for an honest exploration of the Holodomor, the artificial famine engineered by the Soviet authorities in the early 1930s that killed millions of Ukrainians and ravaged the region. Other Soviet atrocities were similarly ignored.

However, forum delegates did find time to condemn the Ukrainian authorities for recent efforts to return historical names to towns and cities throughout the Ukrainian-controlled areas of the Donbas. This was portrayed as evidence of the Ukrainian government’s anti-Russian policies.

Kremlin efforts to criticize the Ukrainian authorities for the “Ukrainianization” of Ukraine speak volumes about Russia’s deeply entrenched imperial thinking. This kind of ideology has roots stretching all the way back to the Czarist past, an era when Ukrainians were branded “Little Russians” and their language was suppressed as a mere dialect.

Such thinking lingers on. Putin has repeatedly stated that he regards Ukrainians and Russians as “one nation”, while Kremlin spokesman Dmitry Peskov confirmed on February 8 that Moscow continues to view Ukraine as part of the “Russian World.”

It is not clear what the Kremlin hopes to achieve by promoting the Russian Donbas doctrine. Russian officials responded to Simonyan’s call for annexation by stating that Moscow has no such plans. For once, these denials look plausible. At present, there is little sign that Putin will seek to incorporate the Donbas into the Russian Federation as he did with Crimea. Doing so would be hugely expensive and would also invite a new wave of international sanctions, while the current status quo serves Russian purposes by keeping Ukraine destabilized.

If annexation remains unlikely, what is Moscow’s goal? The recent propaganda offensive may be an attempt to test the reactions of the incoming Biden administration or gauge broader international opinion. Alternatively, it could be a means of increasing the pressure on Ukraine’s President Zelenskyy, or an indication of a turn towards increasingly open imperialism. One thing is for sure: with large swathes of eastern Ukraine still under Russian occupation and Moscow showing little appetite for a negotiated settlement, nobody in Kyiv will be taking anything for granted.

The international community has yet to appreciate the potentially grave consequences of allowing Moscow’s latest infowar gambit to go unchallenged. By championing the idea of a Russian Donbas, the Kremlin is once again threatening to redraw national borders by force based on perverted notions of ethnic kinship and historical justice. This revisionist agenda was first established with the 2014 seizure of Crimea. Seven years on, Russia remains largely unpunished and self-evidently unrepentant.

Unless a strong signal is sent to Moscow, further aggression cannot be ruled out. Nor is the threat posed by Russian revisionism limited to the current conflict zone. On the contrary, Russia’s historical claims towards Ukraine extend well beyond the Donbas region and include the entire northern Black Sea coastline. In addition to Ukraine, Moscow’s imperial revisionism also encompasses Belarus, the Baltic States, and much of Central Asia.

It might seem tempting to view the Russian Donbas doctrine as just another empty boast in Moscow’s endless propaganda war against Ukraine. However, this ignores the sobering experience of the past seven years and the tragic lessons of the totalitarian twentieth century. The nations of Europe know better than anyone that the kind of irredentist claims currently being promoted in Russia can lead to catastrophe. Western leaders would be wise to address this dangerous talk before it is too late.

Alvydas Medalinskas is a former Lithuanian MP. He is a political analyst at Mykolas Romeris University (Vilnius) and Deputy Chairman of the Mariupol-based Donbas Gates NGO.