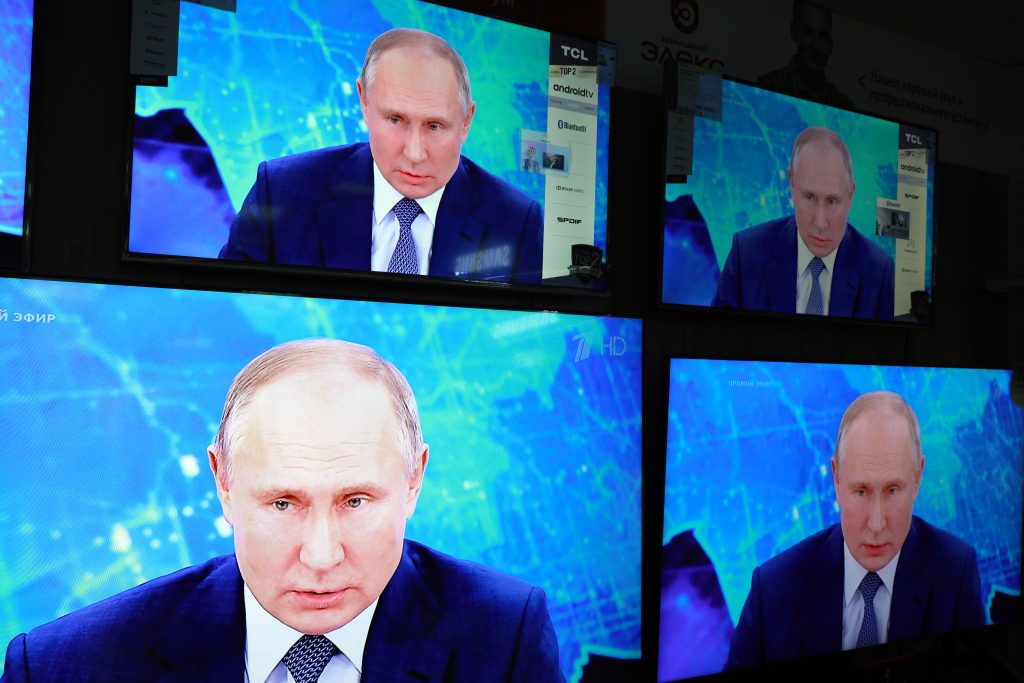 Russian opposition leader Alexei Navalny is a media-savvy man who appreciates the importance of memorable soundbites. This talent first became apparent back in 2011, when he branded Vladimir Putin’s United Russia “the party of crooks and thieves.” Much to the chagrin of the Kremlin, the name stuck.

Even while incarcerated, Navalny remains eminently quotable. During a February 2 court hearing that saw him receive a three-and-a-half year sentence for violating the terms of his parole, Navalny offered a withering appraisal of Putin’s place in Russian history. “He’ll go down in history as nothing but a poisoner. We all remember Alexander the Liberator (Czar Alexander II) and Yaroslav the Wise (medieval Grand Prince of Kyiv). Now we will have Vladimir the Underpants Poisoner.”

Navalny has very good reason to label Putin a poisoner, of course. He has only recently recovered from an assassination attempt using the chemical weapon Novichok, which was apparently placed in his underwear by agents from Russia’s Federal Security Service (FSB). This left Navalny comatose in a German hospital for an extended period, hence the violation of his parole.

Nor is Navalny alone.

The list of suspected Kremlin poisonings during Putin’s 21-year reign is a long one. Many of these cases have made international headlines. An early example was the 2004 attack on Ukrainian presidential candidate Viktor Yushchenko. Then came the 2006 polonium killing of Russian defector Alexander Litvinenko in the heart of London. More recently, the 2018 operation in sleepy Salisbury against former Russian double agent Sergei Skripal sparked a major international scandal.

Navalny’s attempt to christen his nemesis “Putin the Poisoner” may actually be even more apt than the anti-corruption activist himself appreciates. While Putin’s alleged penchant for poison plots is well known, his poisonous contributions to Russian and international affairs go well beyond the deadly chemical concoctions used to silence his opponents.

Over the past two decades, Putin has worked hard to poison Russian public opinion against the democratic world. After first seizing control of the country’s mainstream media, he has created a formidable propaganda machine and tasked it with demonizing the West. News bulletins on Russia’s federal TV channels are considered incomplete without the obligatory reports of chaos and mayhem across Europe and North America. Meanwhile, virtually any development unfavorable to Russia is blamed on Western politicians, who are depicted as driven by an obsessive brand of Russophobia that is frequently cited but never satisfactorily explained.

This toxic media culture has spread far beyond Russia’s borders. Since the mid-2000s, Kremlin broadcasters have brought their unique blend of polarizing opinion, fake news, and conspiracy theories to international audiences. Meanwhile, Putin has unleashed armies of internet trolls to contaminate comment sections and social media timelines across the globe. Russia’s goal in all this is not to convince. Instead, the Kremlin seeks to irreparably pollute debate and fuel perceptions that the truth is ultimately unknowable.

“Poisonous” may also be the most appropriate term to describe Putin’s wider hybrid war against the democratic world. Whether it is stirring up ethnic animosity in the United States, backing sundry separatist movements and extremist political parties, or fanning the flames of anti-immigrant sentiment across the EU, Moscow’s efforts have no ideological foundations beyond a desire to sow discontent and feed instability.

Putin’s poisonous role in international affairs is nowhere more evident than in the post-Soviet region. Russia’s post-1991 relationship with the other former Soviet republics was always destined to be complicated by a troubling legacy of imperial domination. Nevertheless, deft handling could have allowed Moscow to capitalize on the profound historical, cultural, economic, linguistic, and social commonalities linking the newly independent nations of the ex-USSR.

Instead, Putin’s policies of entitled interference and thinly-veiled contempt for sovereignty have steadily eroded Russia’s inherited advantages across the region. From Kazakhstan to Belarus, his undiplomatic comments and imperialistic actions have left a bitter taste and done untold damage to Russian interests.

This trend is perhaps most immediately apparent in Ukraine. At the beginning of Putin’s reign in 2000, Russia and Ukraine were formally separate nations but remained almost inextricably intertwined. Over the subsequent two decades, the Russian dictator has succeeded in poisoning relations between the two countries to a degree that few observers would previously have believed possible.

Putin’s disastrous Ukraine policies began with his heavy-handed intervention in the country’s 2004 presidential election. This was one of the main causes of Ukraine’s Orange Revolution, and set the tone for a deterioration in ties that culminated in the Russian invasion of Crimea and eastern Ukraine in 2014.

As we approach the seventh anniversary of the ongoing conflict, Russian influence in Ukraine has been reduced to levels not witnessed in over three hundred years. The days when pro-Russian political parties could dream of winning Ukrainian presidential elections and securing parliamentary majorities are long gone, while support for integration with Russia has dwindled to single figures.

The poison has seeped down to every level of society in both countries, placing impossible strains on personal relationships among millions of extended families. Since 2014, Russian TV audiences have been fed a daily diet of anti-Ukrainian hysteria and have come to regard Ukraine as one their country’s greatest adversaries. Across the border, an entire generation of young Ukrainians with no memory of the shared Soviet past now knows Russia primarily as an enemy aggressor.

None of this has persuaded Putin to change his approach. On the contrary, he has doubled down, pledging not to abandon Russian-occupied eastern Ukraine and repeating the chauvinistic tenet that Russians and Ukrainians are “one people.”

Putin’s increasing toxicity over the past two decades may be a matter of necessity for the Kremlin strongman. Unable or unwilling to pursue a path towards democratization inside Russia itself, Putin has found himself hopelessly outgunned by the West in the soft power battle for hearts and minds. He has sought to mask this fundamental weakness by going on the offensive.

Putin’s hybrid war against the democratic world has taken on many forms and remains a highly opportunistic affair. The one constant feature has been the desire to destabilize, divide, and discredit the enemy whenever possible. In the zero-sum mindset of the Kremlin, anything that damages the West is in Russia’s interests.

From Putin’s perspective, this is an essentially defensive undertaking. The Russian leader’s principle aims are to weaken Western unity and poison perceptions of democracy. Unlike his communist predecessors, he makes no claim to the moral high ground. Instead, he seeks to drag his opponents down and demonstrate that they are equally prone to the flaws and imperfections besetting his own authoritarian model.

Closer to home, Putin’s defensive doctrine demands ruthless opposition to any signs of democratization within the former USSR. This explains his relentlessly malignant approach towards Ukraine, and also serves as the logic driving Russia’s continued backing for the pariah regime of Alyaksandr Lukashenka in neighboring Belarus.

There is no immediately available antidote to Putin’s poisonous politics. On the contrary, the situation is likely to deteriorate further as Russia continues its descent into dictatorship. This was painfully clear during Josep Borrell’s recent Moscow trip, which ended with the usually accommodating EU foreign policy chief acknowledging that Russia regards Europe’s democratic values as an existential threat.

Borrell’s comments are an indication that the democratic world is finally arriving at an accurate understanding of Putin’s implacable opposition and toxic intentions. This growing awareness must now shape Western approaches towards Russia. There should be no more talk of resets and no further attempts at appeasement. Instead, efforts should focus on reducing reliance on Russia and limiting the Kremlin’s ability to interfere internationally. Putin has little choice but to continue poisoning the geopolitical climate. The only sensible response is Russia’s long-term isolation.

European foreign policy chief Josep Borrell’s disastrous recent visit to Moscow has sparked a crisis in Russia-EU relations that could end up being to Ukraine’s advantage.

Image: Putin the Poisoner: Russian President Vladimir Putin has adopted a peculiarly poisonous approach to international politics in a bid to defend his own authoritarian regime by dividing, discrediting, and destabilizing the democratic world. (Alexander Ryumin/TASS via REUTERS)