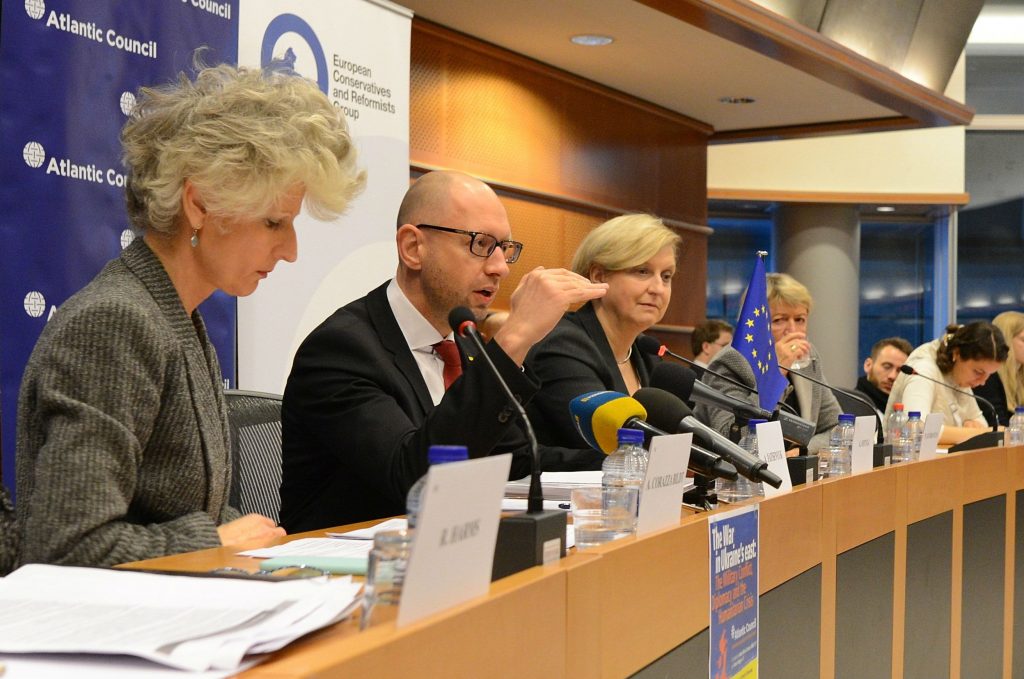 With respect to Ukraine and Russia’s aggression in the eastern part of the country, Europe needs to step up its game.

That was the consensus at “The War in Ukraine’s East: The Military Conflict, Diplomacy, and the Humanitarian Crisis,” a discussion co-hosted by the Atlantic Council and Members of the European Parliament Anna Maria Corazza Bildt and Anna Fotyga. The event, which occurred at the European Parliament in Brussels on November 29, also featured MEP Rebecca Harms, former Ukrainian Prime Minister Arseniy Yatsenyuk, and John E. Herbst, a former US ambassador to Ukraine and director of the Dinu Patriciu Eurasia Center at the Atlantic Council.

“Europe has a lot of challenges in front of us, but we have to…deal with the crises at the same time,” said Bildt, who is with the European People’s Party. “At the moment, we are not.”

The discussion was wide-ranging and included mentions of Ukraine’s 1.8 million internally displaced people, Russia’s ongoing propaganda war, and OSCE monitors’ lack of access to the conflict areas. But participants’ comments repeatedly returned to questions of the European Union’s commitments to Ukraine and whether it is meeting them—particularly in the wake of the November 24 EU-Ukraine summit that failed to approve visa liberalization for Ukrainian citizens, despite European promises that the process would be finished by November.

It’s time for Europe to do its part, Yatsenyuk passionately pointed out, because Ukraine has fulfilled its pledges of deep reform. “What we promised, we delivered. Look at the IMF reports, look at the World Bank reports, look at the reports of the European Union member states. This is for the first time in two decades when Ukraine really delivered.”

Yatsenyuk and Fotyga, who is with the European Conservatives and Reformists Group, also raised questions about the European Commission’s decisions regarding energy. Fotyga criticized the commission’s support for Gazprom’s increased use of the Opal pipeline—which is “almost like giving a green light to Nord Stream II,” she said.

Yatsenyuk pointed out that the European Commission is essentially allowing Russia to dismantle European energy security. “And it severely affects Ukraine’s economy,” he said. “Ukraine is to lose practically 20 percent of its transit flow…about $400 million. It’s not fair.”

These issues and the underlying lack of support they imply for Ukraine are particularly crucial right now, participants agreed. Over the past year, Europe has seen an increase in anti-EU sentiment, illustrated by the Netherlands’ April referendum against the EU Association Agreement with Ukraine and the rise of a pro-Russia, center-right politician in France. Checking those movements will require real vigilance on the part of EU policymakers.

And then, of course, there’s the recent election of Donald Trump as US president, an issue raised by both Herbst and Harms, who is with the Group of the Greens/European Free Alliance.

“I was…in Kyiv [last week] and I faced discussions on what Donald Trump means for Ukraine,” explained Harms. “The first consequences and the toughest impact will probably be on Ukraine. So we as Europeans are in a new role and a new responsibility—but I don’t see how that responsibility is really awakened [yet].”

It’s a sentiment he voiced throughout the whole discussion: that Russia’s war against Ukraine is simultaneously a war against democracy, international law, and freedom—as well as against the borders of NATO.

“We expect that the European Union will stand shoulder to shoulder with Ukraine,” he said. After all, “we did our part. So please, we kindly ask our European friends and partners to do theirs.”

Amanda Abrams is a freelance writer based in Durham, NC.