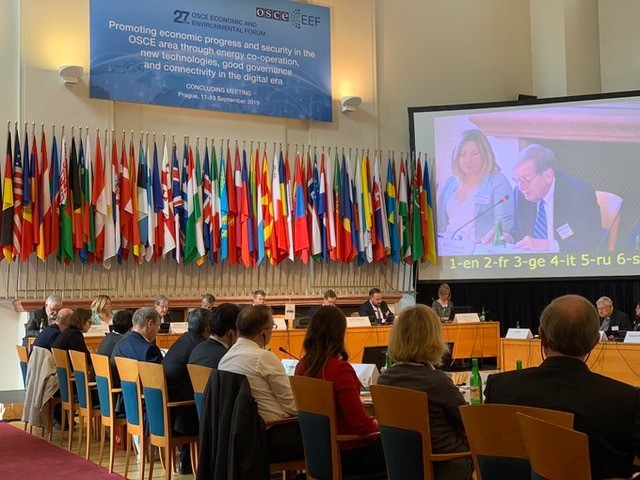 The 27th Organization for Security and Co-operation in Europe (OSCE) Economic and Environmental Forum aimed to promote economic progress and security in the OSCE area through energy co-operation, new technologies, good governance and connectivity in the digital era. The following is Amb. Richard Morningstar’s address to OSCE country representatives in Prague on September 11, 2019.

Thank you Foreign Minister Petříček, Chairperson-in-Office Lajcak and the OSCE, Ambassador Gilmore and his staff for allowing me to address this forum. It is an opportune time to reflect on the growing confluence between new technologies, digitization, and opportunities for increasing energy connectivity, synchronization, cooperation, and security in the OSCE area. At the end of last year, the OSCE published a “Declaration on the Digital Economy a Driver for Promoting Co-operation, Security and Growth.” As I’m sure you know, the Declaration recognized that, “implications of digital transformation are not only leading to progress and prosperity, but also to the emergence of new or enhanced security threats and challenges.”

This is all the more relevant considering the increasing speed of the global energy transition underway. While the famous Czech energy economist and historian Vaclav Smil maintains that energy transitions necessarily are slow, the evidence, in fact, suggests that though history often repeats itself, rules which once held true may no longer be the case today. And even Professor Smil admits that what is possible on a country or regional scale can be quite impressive, with the right policies and the right technologies.

So yes, it is true that dramatic shifts in energy systems are not the norm, but the exception. But these exceptions seem likely to occur with more regularity, fueled in no small part by the velocity of change introduced by many new technologies, including renewables, advanced nuclear, carbon capture, and digital technologies.

As with so many new technologies and advancements, governing the energy system in the digital era will be all about harvesting the benefits while being mindful of, and mitigating, the new potential risks.

New technologies can have the benefits of enhancing competitive, transparent, and synchronized markets, reducing carbon emissions, and mitigating geopolitical risk by reducing dependence on single resources and single suppliers, but these technologies can also increase the risk of conflict by insufficient cooperation and governance and in particular areas such as cybersecurity.

Let me speak for a bit about how new technologies—both in terms of energy “hardware” as well as energy “software” are generating these new opportunities to be capitalized upon, as well as new challenges to be grappled with.

The growth of clean energy

The falling costs of clean energy are a tremendous opportunity for OSCE countries. Solar and wind power, in particular, have reached the “crossover” point in many markets where new solar or wind is the cheapest resource available, and in some markets is even cheaper than existing coal plants. We have seen this phenomenon in the United States, notably in places like Tennessee and Indiana, and we can expect to see it in parts of Europe, the Caucasus, and Central Asia as well, wherever fossil fuel plants are particularly old or inefficient and renewable resources are abundant.

The limits of current approaches

But, with new clean energy resources, which are often intermittent in nature, like wind and solar, come new challenges. The record low wholesale electricity prices we have seen across swaths of Europe and the United States—occasionally reaching negative prices—is upending the conventional logic of power markets and in some cases disincentivizing important new investments.

We need new market structures, new regulatory frameworks, and new business models to better harness the potential of renewables and more rationally distribute their benefits and costs. We need more spending on innovation and commercialization for aforementioned “zero emissions baseload” technologies like advanced nuclear, carbon capture and storage, and next-generation geothermal and hydro in order to complement the intermittent resources of solar and wind. And we need larger, better-integrated, synchronized energy networks so that, for example, when the sun is shining in Spain, that energy can seamlessly travel across the continent to serve a sudden surge of demand in Berlin, Bucharest, or Baku.

The improved interconnection of the Iberian Peninsula with the rest of the European grid is an example of the low-hanging fruit that must be harvested to accommodate more modern, clean energy resources onto the grid at greater speed.

The importance of digitalization

As the theme of this Forum reflects, all of these changes will be occurring in the digital era, and new energy “software” is just as important as energy “hardware.” By “software” I mean the energy services, algorithms, rules and governance structures that are used to manage our increasingly decarbonized, decentralized grid in such a way so that it looks more like a symphony, rather than a cacophony, of energy assets.

The Atlantic Council is well aware of this, and in only two weeks’ time we will, in fact, be launching a new paper addressing the role that blockchain might play in the transactive energy markets of the future. This transactive energy model envisions a grid in which large-scale power generation will be complemented by distributed generation (e.g., rooftop solar), distributed demand-side resources (e.g., smart thermostats and energy storage), and electric vehicles drawing from—and possibly selling back into—the grid.

In this transactive energy space, every piece of “hardware,” whether a thermostat or a gas plant or a wind turbine, has a digital interface that allows it to be optimized and coordinated using the latest developments in machine learning and artificial intelligence. If this all goes well, it will create massive improvements in energy efficiency, in asset utilization, and in energy system flexibility. OSCE countries will become far more resilient to energy system shocks, and far less vulnerable to the threat of energy being used as a weapon. Flat or declining energy demand may even call into question the logic of some of the larger infrastructure projects, including major gas pipelines, that are under consideration. I categorically disagree with this. We have to take an “all of the above” approach. Gas will continue to be important. Alternate sources and routes such as the Southern Gas Corridor, which I have worked a lot on, will be critical.

Vulnerabilities and uncertainties in a digital energy era

There are new risks created by ever more interconnected grids, particularly when they are all managed by digital overlays. Take blockchain, for example. To harvest some of the blockchain community’s more ambitious promises, certain information about the grid and the status of assets on the grid would have to be broadcast constantly to distributed nodes in the blockchain network. Does this raise cybersecurity concerns? How should we balance some of the economic advantages of new digital technologies against the possible privacy or security issues that they raise?

Even when blockchain is not being used, and more conventional digital systems are involved, there are still risks to be managed. Strategic denial of electricity service is a real threat, with rolling blackouts or brownouts being imposed quite suddenly on broad swaths of a grid by any actor with sufficient control over a transmission network. Yes, this would mean foregone electricity revenues on the part of the perpetrator, but we have already seen such coercive activities in gas markets in the past.

It is for this reason that bodies such as the OSCE must be actively and responsibly engaged in setting standards and rules for the operation of 21st century interconnected energy grids. It is also a strong rationale for exploring ways to capitalize on some of the decentralized benefits of renewables and other advanced energy technologies that allow for a series of “micro-grids” to be connected into a larger super-grid. In such a model, each micro-grid could be self-sufficient for certain periods of time under certain conditions, affording an extra level of resiliency as a temporary “island” during times of strain without sacrificing connectivity to the broader grid during times of normal operation.

In this digital era it is no longer just watts and BTUs moving across borders in our energy networks, but data as well. This is [an area] for the development of prudent governance.

We should also observe that in this digital era it is no longer just watts and BTUs moving across borders in our energy networks, but data as well. This is one of the most exciting, but also the most contentious, areas for the development of prudent governance. There are divides between the United States and Europe with respect to privacy, not to mention between individual members of the OSCE. Data privacy and data sovereignty are all hot topics in global trade and global governance at the moment. Washington, Brussels, and Beijing appear to be in contention to establish new norms. Data privacy has much greater visibility in the United States over the last few years, with much more attention being given to greater regulation of large social media companies. The question is whether three different poles can exist in this new domain, or whether this will prove to be unstable and a new dynamic will develop. And how will this intersect with digital infrastructure questions such as the future build-out of 5G networks? Coordinating standards will be incredibly important.

However, it turns out, this will have major implications for which energy technologies, services, and business models flourish, and which are left to languish. We can no longer treat data policy and energy policy as separate silos. They are now inextricably intertwined in our digital age.

Finally, a few words on cybersecurity. It’s critically important to address cyber security threats. A coordinated effort will be essential, but not without its challenges, as there is sensitive national intelligence information at stake. Top reasons to cooperate on cybersecurity include (1) Resilience: together we can strengthen our resilience in recovering, responding, and minimizing damage from the cyber-attacks; (2) Identifying malign actors: we can better identify where cyber-attacks come from and determine where the appropriate response should be; and (3) It is in the interest of all countries to address these issues and not use cyber as a weapon: cyber weapons should be considered similarly to kinetic weapons of war.

Cooperation between the United States, Europe, and the rest of the OSCE is critical to addressing these issues. At the Atlantic Council, we are working every day to support and further this cooperation.

Thank you all for hosting me in Prague today. I look forward to the rest of the program.