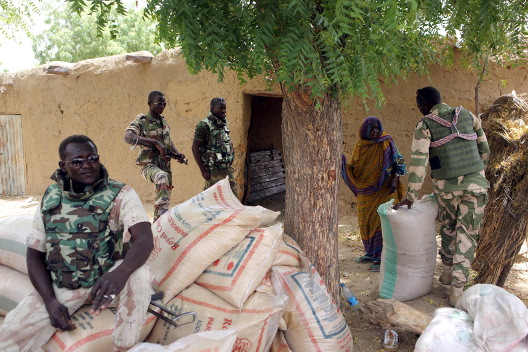 • The origins of the freed kidnap victims are unknown, but the military has announced that most of them are not the schoolgirls kidnapped from Chibok in April 2014

• It is unclear whether the progress against Boko Haram can be maintained as it reverts to guerrilla warfare.

The multinational force that has since February pushed Nigerian terrorist organization Boko Haram from major swathes of three northeastern states scored more victories this week, when it rescued two large groups of kidnapping victims, totaling nearly five hundred women and girls from Sambisa Forest, one of Boko Haram’s last remaining strongholds. Many hoped that the rescued girls would include the 219 Chibok schoolgirls kidnapped in April 2014, whose plight spawned the international #BringBackOurGirls movement, but the military announced that one of the groups of girls is not from Chibok and has not commented on the origin of the more recently-rescued group.

The Sambisa Forest operation could signal new commitment and competence on the part of the Nigerian military, which has faced local and international condemnation for its years-long failure to confront the Boko Haram threat. The current offensive has destroyed nine Boko Haram camps, and the rescue of five hundred kidnapped women would appear to be a moment of redemption in the final weeks of President Jonathan’s administration. (Though it remains unclear how many, if any, civilian hostages were killed during the rescue operation.)

The Nigerian army stepped up its offensive in January 2015 and initially made little progress against Boko Haram. But the terror group overplayed its hand, launching high-profile raids into neighboring Cameroon, Chad, and Niger. In February, first Chad, and then Cameroon and Niger, joined in the offensive, scoring a string of startling victories. The Nigerian military’s current efforts to pressure Boko Haram in the Sambisa Forest should deprive the group of its final major stronghold.

But it is too soon to declare victory against Boko Haram, which has proven its resilience in the past (for example, by reemerging with a vengeance after the killing of its founder Mohammed Yusuf—along with hundreds of his followers—in 2009). Boko Haram’s March declaration of allegiance to the Islamic State may enable it to attract foreign money and fighters, and it still has the capacity to launch costly attacks, such as the recent raid on Lake Chad’s Karamgo Island that killed nearly fifty Nigerien soldiers.

The conflict has also entered its most trying phase. The multinational force will now have to hunt smaller groups of Boko Haram fighters staging guerrilla attacks, while simultaneously protecting liberated areas sufficiently to allow the government to rebuild state institutions. Moreover, as the multinational force pushes Boko Haram out of its Nigerian strongholds, it will likely increasingly focus on attacking Nigeria’s neighbors who are part of the anti-Boko Haram coalition.

All of this comes as Nigeria is preparing to undergo a May 29 transition of power after challenger Muhammadu Buhari defeated incumbent President Goodluck Jonathan in the March 28 presidential polls. Buhari will take office facing several other serious challenges that will compete with the Boko Haram crisis for his attention: the national budget has been hollowed out by slumping oil prices, and an amnesty program that has brought a measure of calm to the restive Niger Delta region is ending in May. Buhari has struck a realistic tone by refusing to guarantee that his army will be able to free the Chibok girls (who by this time may be scattered across several countries); and given the other daunting challenges he will have to confront, he is unlikely to devote significant resources to searching for them.

Image: Nigerien and Chadian soldiers speak with a woman as they give out blankets and food in Damasak March 24, 2015. Boko Haram militants kidnapped more than 400 women and children from the northern Nigerian town of Damasak that was freed in March by troops from Niger and Chad, residents said. Nigerian, Chadian, and Nigerien forces have driven militants out of a string of towns in simultaneous offensives over the past two months. REUTERS/Joe Penney