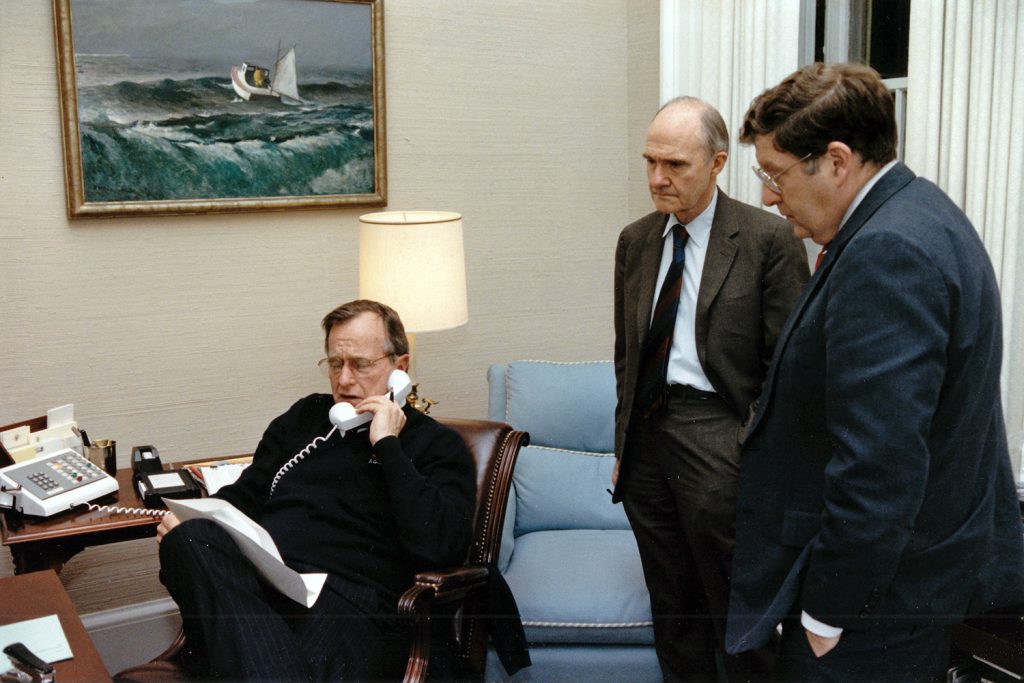 August marks the anniversary of four events that reverberated throughout the last century with tectonic consequences. The first was the start of World War I in 1914.  The second was the bombing of Japan with two nuclear weapons. Third was the Tonkin Gulf incident of 1964 that cemented America’s long entrapment in the quagmire called Vietnam for another decade and the loss of 68,000 American service personnel.

Last week’s column was on the fourth event: Saddam Hussein’s seizure of Kuwait and 1990 and the beginning of Operations Desert Shield and Storm that led to perhaps the most one-sided military victory in history. While we mark those events, last week, we celebrated the life of Lt. Gen. Brent Scowcroft and mourned his death at age ninety-five.

Brent may have been small of stature. But he possessed a giant intellect. Mild manner and self-effacing, the general could be tougher than hardened steel if demanded and if necessary.

Born seven years after World War I in Utah, Cadet Scowcroft was at West Point when Hiroshima and Nagasaki were struck. During the Tonkin Affair Lt. Col. Scowcroft was on the Air Force’s long-range planning staff. And of course when Iraq forces headed into Kuwait, Lt. Gen. Scowcroft, USAF (Ret) was serving for the second time as National Security Advisor for George H.W. Bush having held the post under President Gerald Ford a decade and a half before.

During his long career in and out of government, General Scowcroft was cast as one of the three most influential American national security and foreign policy strategists since the end of World War II with Dr. Zbigniew Brzezinski who died at age eighty-nine in 2017 and Dr. Henry Kissinger the remaining survivor at ninety-seven. While less published than his two distinguished colleagues, the general cast a very long shadow working with both Republican and Democratic administrations.

The general had what could best be called enormous amounts of strategic common sense and an extraordinary decency and regard for his juniors. And he had equal levels of courage. As the George W. Bush administration was preparing to go to war the second time in Iraq in 2002, General Scowcroft published an op-ed in the Wall Street Journal titled “Don’t Attack Saddam” arguing that the intelligence was simply not sufficient to justify going to war.

Given his very close relationship with the elder Bush and the book they co-authored in 1998 called A World Transformed, the White House correctly perceived that in part Scowcroft’s reasoning reflected that of the 41st president. Scowcroft became persona non grata. And tragically, his wise advice was not accepted.

Further evidence of his stature were the huge numbers of commissions on which his wisdom and experience were sought from arms control and strategic nuclear weapons to the Tower Commission convened in the wake of the Iran-Contra Scandal that almost ended the Reagan administration. And presidents as well as presidential candidates welcomed the opportunity to solicit the general’s advice.

Brent also had a sly sense of humor. Perhaps his closest friend, former CIA head, National Security Advisor, and Secretary of Defense Robert Gates described the Scowcroft Award created by the first President Bush for the most extraordinary way of sleeping through briefings. Gates never said, but one assumes, the biggest awardee was the general.

The general was on the board of many institutions and think tanks. At the Atlantic Council with which I have been privileged to be associated for a very long time, the general was instrumental in rekindling its relevance and importance. And the Council is both honored and honors General Scowcroft by hosting the center bearing his name dedicated to sound strategic thinking and as one member correctly noted, providing a “north star” for its course.

I had not seen the general since our last encounter shortly after Donald Trump had been elected. We both shared grave reservations about the future. But the general made the point that it was important to support the commander-in-chief as the administration was taking form. We then both remarked about how the words of the great Scot economist Adam Smith fit. In 1778 after British General “Gentleman” Johnny Burgoyne had been bested by General Gates at Saratoga and news reached Edinburgh where Smith was teaching, a student approached the professor literally crying: “Burgoyne is defeated.  We are ruined!”

To which the eminent Dr. Smith replied: “My dear boy, there is a lot of ruin in a nation.” Nearly a quarter of a millennia later, in many ways, General Scowcroft was a modern-day Adam Smith counseling patience and wisdom. He will be missed.

Dr Harlan Ullman is UPI’s Arnaud deBorchgrave Distinguished Columnist. He is Senior Advisor at the Atlantic Council and his next book is The Fifth Horseman: To Be Feared, Friended or Fought in a MAD-Driven Age.