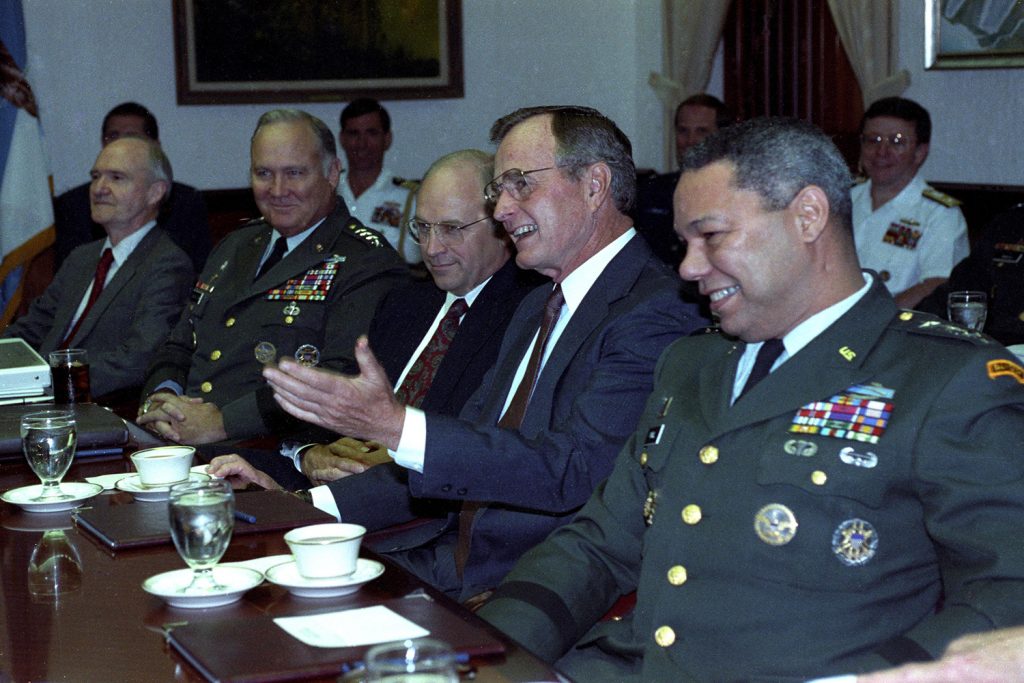 This week marks the 30th anniversary of Iraq’s invasion of Kuwait in August 1990.

That attack galvanized the George H.W. Bush administration to create an overwhelming international coalition to support Operations Desert Shield and Desert Storm to eject Saddam Hussein from his ill-gotten gains. A retrospective look at Shield/Storm is applicable to the current National Defense Strategy and its mandate to deter and—if war comes—defeat an array of potential adversaries, principally China and Russia.

The strategy then was clear: Form the broadest coalition backed by United Nations resolutions, Congress, and the Arab League. Collect dozens of allies. Have some pay for the war. Assemble a massively superior force in Saudi Arabia. Bomb Iraq to its knees. Launch a ground assault with hundreds of thousands of troops. After Iraq retreated from Kuwait, end hostilities. And fight an enemy not ready for prime time.

The air war started on the evening January 16, 1991. The bulk of the ground campaign was launched on February 24, lasting 100 hours. The Iraq Army was crushed. The United States sustained 146 killed in action, just under half by friendly fire and an Iraqi Scud ballistic missile that tragically hit a US Army barracks in Saudi Arabia. The magnitude of this victory ended the stigma of the Vietnam War and the difficult period the US military faced in its aftermath.

While a few criticized the Bush administration for not invading Iraq and removing Saddam from power, as the younger Bush would learn after 2003, that decision would have been strategically catastrophic. Despite the genuine concerns that with the fourth-largest army in the world, experience gained from the war with Iran and weapons of mass destruction, Saddam could have been a formidable enemy, it turned out there was virtually no way the coalition could have failed, even if Iraq began a procrastinated withdrawal from Kuwait before conflict started.

Thus, Desert Shield/Storm was a “one-off” campaign. The coalition had five months to deploy a “mountain of steel” to Saudi Arabia in an unopposed environment. It bombed Iraqi targets at will. And the ground campaign was, in essence, a live-fire training exercise and perhaps the most lopsided military land battle in history.

That said, the greatest failures were of intelligence and the lack of understanding of Gulf politics. When VII Corps Commander Lt. Gen. Frederick Franks led the famous “left hook” to envelope Saddam’s army in Kuwait, he hardly knew what was happening beyond the next sand berm (dune). The air war commander, Lt. Gen. Charles Horner, despite the vast superiority of his forces, did not know where to “stick the needle” to collapse the regime before the land campaign started. In the Persian Gulf, the US Navy had no intelligence about Iraqi mines or the reasons why so many Iraqi tankers were filled with oil and at anchor.

Last, the failure to take out Saddam’s Scuds aimed at Israel could have been disastrous if Israel intervened, possibly wrecking the coalition.

Regarding politics, the truce administered at Safwan allowed the Iraqis free use of helicopters that Saddam used to eradicate local revolts and uprisings. Regarding Kuwait, in returning the al Sabah family to the throne, had the Bush administration limited its power and imposed other restrictions that made society more open, how different the Gulf might be today.

Still, Desert Shield and Storm are relevant in posing several critical and unanswered questions concerning today’s National Defense Strategy (NDS). In executing the NDS, specifically with regard to China and Russia, does the US political leadership:

Put even more directly, after twenty years of conflict in Afghanistan and Iraq, is the United States adequately prepared for a major war against a competent peer or peers, lacking all the advantages it enjoyed during Desert Storm, especially time to build up forces?

Unless this and other questions are carefully considered, even in the extraordinarily unlikely event of a war with China, the outcome may prove to be very different from Desert Storm.

Harlan Ullman is UPI’s Arnaud deBorchgrave Distinguished Columnist, a senior adviser at the Atlantic Council and author of the upcoming book, “The Fifth Horseman: To Be Feared, Friended or Fought in a MAD-Driven Age.”