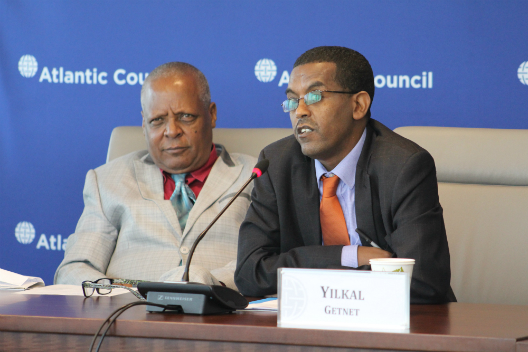 On Wednesday, August 31, the Africa Center hosted a breakfast roundtable with Dr. Merera Gudina, chairman of the Oromo Federalist Congress, and Eng. Yilkal Getnet, chairman of the Semayawi (Blue) Party, to discuss the state of political affairs in Ethiopia in light of recent and unprecedented mass protests in the Oromia and Amhara Regions.

In their remarks, Dr. Merera and Eng. Yilkal cited rising costs of living, limited employment opportunities for a growing youth population, and a restrictive political and media environment as impetus for the ongoing demonstrations. They condemned the government’s violent crackdown on primarily peaceful demonstrations, which began in November of last year.

Dr. Merera and Eng. Yilkal highlighted their recommendations to the government for a peaceful and prosperous way forward in Ethiopia, which included permitting peaceful protest, halting the unlawful killing of citizens, releasing political prisoners, and ceasing deployment of the military to disperse demonstrations. Both rejected what they considered “cosmetic” reforms from the ruling Ethiopian People’s Revolutionary Democratic Front (EPRDF) and suggested that more substantial changes were needed to prevent the country’s fracturing.