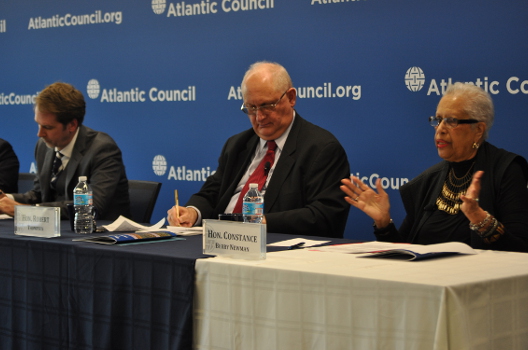 The interdependencies among food, water, and energy resources—called the food-water-energy “nexus”—are a critical challenge for an African continent experiencing rapid urbanization and increasing pressure on natural resources. But given its untapped potential, Africa is also uniquely positioned to serve as a leader in addressing nexus-related challenges.

The event opened with welcoming remarks from Pham, who spoke about the opportunities and challenges for Africa inherent in the nexus, as well as its significance for transatlantic relations. Pham also thanked the OCP Group S.A. for their support of the Africa Center’s work on the food-water-energy nexus in Africa, including the new report.

Engelke presented the report’s findings and joined a panel discussion moderated by Pham. In addition to Engelke, the panel featured the Honorable Constance Berry Newman, senior fellow at the Africa Center and former assistant secretary of state for Africa, and the Honorable Robert Thompson, visiting scholar at The Paul H. Nitze School of Advanced International Studies at Johns Hopkins University and former assistant secretary for economics at the US Department of Agriculture.

Several themes that echoed the report’s findings emerged during the panel discussion. The speakers stressed the scale of the food, water, and energy security challenge in Africa that, depending on how it is managed, can significantly impact the transatlantic community’s future development for good or ill. Presenters also noted that building the institutions and processes necessary for successfully managing nexus-related challenges is a difficult and long-term undertaking that will require robust partnerships between the public and private sector, a multi-stakeholder, holistic approach, and technological innovation.

The report examines the dangers of failing to tackle the challenges of this nexus in Africa, and highlights the potential gains from doing so effectively. Rising demand for food, water, and energy globally requires a thoughtful and effective strategy from policymakers, civil society, and industry—at risk is a more stable, prosperous, and sustainable future.

The report can be accessed here.