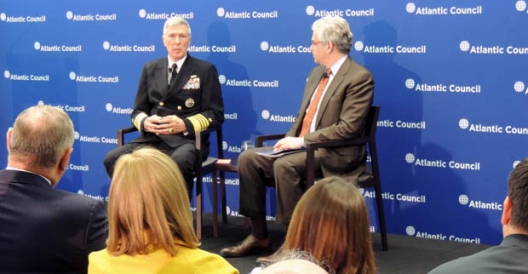 Not only a vital driver of the global economy, the Asia Pacific is also the most militarized region in the world, containing seven of the ten largest standing militaries in the world together with five declared nuclear nations. The United States maintains a strong presence within this uncertain and dynamic security environment, and its role will continue to be solidified both geographically and through its alliances and partnerships in the region. In an event hosted by the Atlantic Council’s Brent Scowcroft Center on International Security on March 6, 2014, the commander of US Pacific Command (PACOM), Admiral Samuel J. Locklear III discussed the near- and longer-term outlook for PACOM to reinforce the US security architecture in the Asia Pacific, and the challenges and opportunities facing PACOM as it executes the Obama administration’s core defense strategic priorities.

Admiral Locklear illustrated the importance of the looking forward to the next decade for military planning in the region, and that despite the challenges posed by fiscal constraints the US continues to maintain a robust forward military presence in Asia. A discussion on US-China relations also highlighted the improvement of military-to-military cooperation through increased dialogue and participation in global forums. For Admiral Locklear, climate change presents the most pressing long term threat to the region. In the past year, eighty per cent of the global natural disasters have occurred in the Asia-Pacific region. Issues like population density and limiting topography contribute to the increased fatalities seen in the most recent tragedies. Additionally, Admiral Locklear discussed the future of PACOM with respect to the new defense budget and Quadrennial Defense Review. In order to maintain maritime security throughout the region the US Navy will supply PACOM with their most capable and most robust equipment, as ultimately the security of the seas is integral to the security of the region, as supported by the current US regional strategy.

The event took place as part of the Cross-Straits Series of the Scrowcroft Center’s Asia Security Initiative, which examines strategic and current affairs surrounding cross-straits relations.