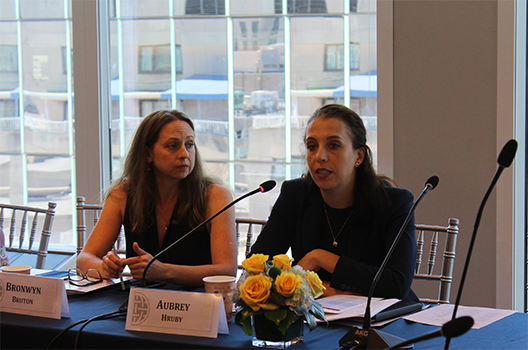 Hruby summarized the changing nature of Chinese financing in Africa, contrasting the well-documented government-to-government lending model with China’s growing incursions into private equity, venture capital, and other investment mechanisms. She also highlighted many of the gains Chinese companies have made in telecommunications, security technology, and media sectors, advising US investors and policy makers to look beyond China’s traditional dominance in infrastructure to new priority areas. Hruby asserted that the United States must build out its commercial strategy toward Africa, using new tools such as the US International Development Finance Corporation to maintain the upper hand in areas of comparative advantage.

An interactive debate followed during which participants discussed the most effective ways to break down persistent barriers to trade in sub-Saharan Africa through new programs such as the Prosper Africa initiative, and the potential of the new African Continental Free Trade Agreement to facilitate American investment on the continent, particularly by small- and medium-sized enterprises.

Among those in attendance were H.E. Seydou Kaboré, ambassador to the United States of Burkina Faso; H.E. Mahamadou Nimaga, ambassador to the United States of the Republic of Mali; representatives from key US government agencies including the US Department of Commerce, US Department of State, US Department of the Treasury, Millennium Challenge Corporation, Office of the US Trade Representative, Overseas Private Investment Corporation, and US Agency for International Development; and members of the intelligence community as well as private equity and advisory firms working in African markets.