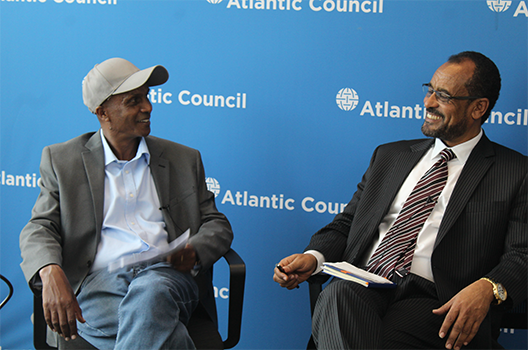 On Tuesday, May 8, the Atlantic Council’s Africa Center hosted a roundtable with Mr. Bekele Gerba, deputy chairman of the Oromo Federalist Congress (OFC), and Mr. Eskinder Nega, prominent Ethiopian journalist and blogger. In February, both men were released from prison, having been jailed for years under the country’s anti-terrorism laws.

In their prepared remarks, Bekele and Eskinder expressed cautious optimism for Ethiopia’s prospects under the new prime minister, Dr. Abiy Ahmed, who was elected in April and has promised an ambitious slate of political reforms. Eskinder proposed that there should be an unofficial grace period of Abiy’s first one hundred days in office, but both speakers noted the urgency of the people’s demands to lift the state of emergency (which has been in place since February). Bekele and Eskinder also called for an all-inclusive dialogue with the opposition, leading to free and fair elections in the near future. Both demanded support from the international community to ensure a successful democratic transition.

In the off-the-record discussion that followed, Bekele and Eskinder engaged with senior US government officials, congressional staffers, and representatives of advocacy organizations.

Before the event, Bekele and Eskinder detailed their hopes for Ethiopia’s future on Facebook Live: