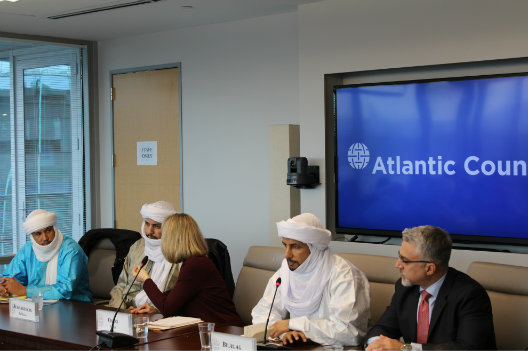 On Thursday, January 11, the Atlantic Council’s Africa Center hosted Mr. Bilal ag Acherif, former executive president of the Coordination of Azawad Movements (CMA), for a private roundtable discussion on the status of the Azawad movement, the role of state and non-state actors in security affairs across the Sahel, and his hopes for the peace process in northern Mali.

In his remarks, Acherif provided deep insight into the Azawad movement and the security situation in northern Mali. He stressed that the insecurity in the region is not a cause, but a result of political disputes, and pointed to the implementation of the 2015 Algiers Accord, which seeks to bring stability to northern regions of the country, as a way forward. In particular, he underscored the need for an inclusive, reconstituted defense force, arguing that the inefficiencies of the Malian army, coupled with a dearth of trust from local populations, constitute a major impediment to the implementation of the peace accord and the future prosperity of the region.

A discussion, moderated by Atallah, followed Acherif’s prepared remarks and focused on the Algiers Accord, recent human rights violations across the region, and the role of international actors in cooperatively tackling security threats across northern Mali.

The CMA delegation also included Mr. Attaye ag Mohamed, director of human rights and judicial affairs, Mr. Alghabass ag Intalla, former executive president of the CMA, and Mr. Mohamed Ould Mahmoud, spokesperson for the CMA. Also in attendance and participating in the roundtable were a number of current and former US and non-US government officials, business leaders, and civil society representatives.