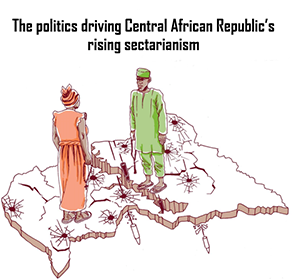 On Thursday, July 12, the Atlantic Council’s Africa Center, in partnership with the Enough Project, hosted Nathalia Dukhan, field researcher and analyst for the Enough Project and The Sentry, for a private roundtable discussion on increasing sectarian violence and political turmoil in the Central African Republic (CAR).

CAR has suffered from waves of sectarian violence since 2013, after a collection of armed groups known as the Séléka seized control of the capital Bangui and overthrew the ruling government led by Francois Bozizé. Since that time, multiple peacekeeping missions and political dialogue efforts have attempted to restore stability to the country, but to little avail. Dukhan presented her research on the worsening of the crisis, the numerous armed factions and criminal enterprises operating in the country, their motivations, and the risks they pose to justice and peace efforts. She also discussed the emergence of new international actors in CAR, particularly Russia, and their attempts to garner influence in CAR and elsewhere in Central Africa through economic and defense cooperation.

The discussion, moderated by Ms. Bronwyn Bruton, Africa Center director of programs and studies and deputy director, followed Ms. Dukhan’s remarks and focused on coordination among armed groups, as well as policy instruments that could be used to restore institutions and the rule of law in the country.