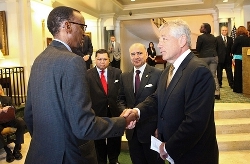 On March 29, 2012 the Michael S. Ansari Africa Center hosted H.E. Paul Kagame, President of the Republic of Rwanda, for a roundtable luncheon discussion with senior policy makers and opinion leaders at the Army and Navy Club in Washington, DC.

President Kagame addressed economic growth and the sustainable development in his country, which has been hailed by many as “Africa’s biggest success story.” President Kagame spoke about Rwanda’s Vision 2020 development plan, which aims to transform the country’s economy from one based on subsistence agriculture to one based on information and communications technology with high levels of private investment and lower levels of external aid. Atlantic Council Chairman, Senator Chuck Hagel, gave introductory remarks and Ansari Africa Center director Dr. J. Peter Pham moderated the discussion.

H.E. Paul Kagame was inaugurated as Rwanda’s sixth president in March 2000. In August 2003, he won Rwanda’s first multiparty elections, bringing to an end the transitional period that had followed the ending of the genocide; he was reelected in August 2010. President Kagame, who grew up in exile in Uganda after his family fled in 1959, played an instrumental role in forming the Rwandan Patriot Front (RPF) which ultimately defeated the extremist forces responsible for the genocide in 1994. Following the liberation of the country, he served as vice president and minister of defense before succeeding to the presidency. President Kagame currently serves as chair of the United Nations Secretary-General’s Advisory Group on Millennium Development Goals and as co-chair along with Carlos Slim of the International Telecommunication Union’s Broadband Commission.