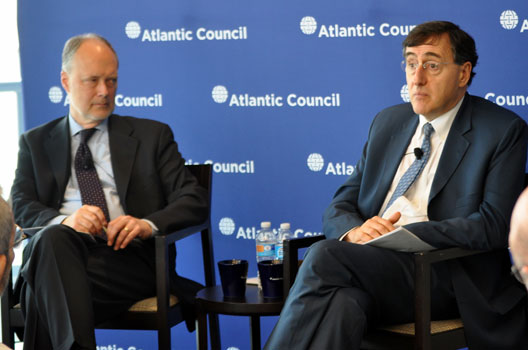 He briefed the audience on the recently-concluded agreement with the Afghan Government on an IMF Staff Monitored Program, or SMP, which aims to improve Afghanistan’s macroeconomic performance by accelerating structural reforms and assuring continued donor support. He cited uncertainty about Afghanistan’s business climate and economic governance, security challenges, low growth, and fiscal and banking vulnerabilities as main reasons for the country’s weak economic standing. Ross also noted however that the economy is stable, with solid reserves, low inflation, and projected growth and increased revenue to the government, forecast at 9.6% of GDP. Improving the tax administration and strengthening public financial management are also crucial elements in the SMP’s mission to enact a sound fiscal policy for Afghanistan. Governance reforms will also be pushed under the SMP, including pending measures to counter money laundering and the financing of terrorism. Legislation to criminalize bribery, and improvements to enforcement, will also be advocated. Ross also mentioned the salience of Foreign Direct Investment (FDI) to the growth of Afghanistan’s economy while noting that creating a climate to encourage Afghans to invest in their own economy is a principal goal for the government.