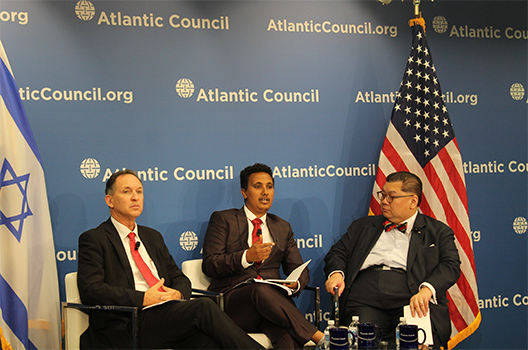 In celebration of the 60th anniversary of MASHAV–Israel’s Agency for International Development Cooperation–the Atlantic Council’s Africa Center, in partnership with the Embassy of Israel to the United States, hosted an event on US-Israeli development cooperation on Wednesday, July 18. The conversation focused especially on the “trilateral” efforts by the two countries in Africa as well as the lessons learned by the Israeli agency over the years. The event featured a welcome and introduction by Dr. J. Peter Pham, Atlantic Council vice president and Africa Center director, followed by remarks by H.E. Ron Dermer, Israel’s ambassador to the United States. Amb. Gil Haskel, deputy director general of the Ministry of Foreign Affairs and head of MASHAV, and Mr. Ramsey Day, deputy assistant administrator of the US Agency for International Development (USAID)’s Bureau for Africa, then presented keynote remarks.

In the first panel, Amb. Haskel highlighted the success of triangular cooperation between Israel, the United States, and Ethiopia in improving access to agricultural technology and sustainable farming methods for smallholder farms in Ethiopia. Mr. Beze then provided an in-depth view of the Smallholder Horticulture Project, noting how its focus on capacity building has opened new doors for Ethiopia’s agricultural sector.

In the second panel, Van Gelder and Mariaschin discussed MASHAV’s unique approach to development through its emphasis on building relationships between people and “training the trainers.” They also discussed the importance of development and MASHAV’s many diverse programs in representing both Israel abroad. The ensuing conversation focused on a variety of topics, including the extent to which Israel’s history influences MASHAV’s work today and future focal points of development assistance around the globe.

Among those in attendance and participating in the discussion were H.E. Ammon Mutembwa, ambassador of Zimbabwe to the United States; Amb. Werner Romero, former ambassador of El Salvador to Israel; Amb. Herman J. Cohen, former US assistant secretary of state for African affairs; Ms. Kaye Lee, acting deputy assistant secretary for security affairs and Central Africa in the US State Department’s Africa Bureau; and a number of US and non-US government officials, business leaders, and development professionals.

The event concluded with a light reception hosted by the Embassy of Israel.