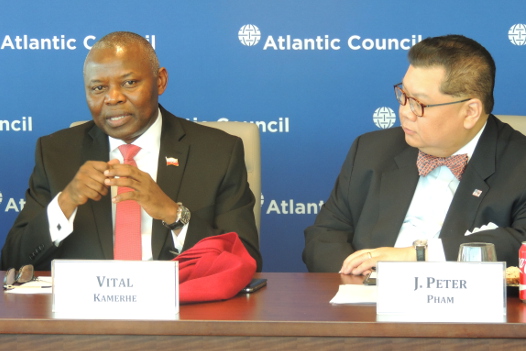 Despite being home to extraordinary mineral deposits and other natural resources, the Democratic Republic of the Congo (DRC) is one of the most under-developed countries in the world, and hosts the United Nations’ largest peacekeeping mission. In the run-up to DRC’s 2016 presidential election, both the United States and the European Union have expressed concern about current President Joseph Kabila’s apparent intention to seek a third term, despite clear constitutional obstacles.

On Monday, March 9, the Atlantic Council’s Africa Center hosted a roundtable discussion with Vital Kamerhe, former president of the National Assembly and current president of the opposition political party, the Union for the Congolese Nation. Kamerhe finished third in the 2011 presidential election and is expected to be a leading candidate in the contest that is supposed to take place next year. The discussion was moderated by Africa Center Director J. Peter Pham, and revolved around the looming 2016 presidential contest and the worrying possibility that Kabila will not yield power.

The Congolese constitution expressly forbids any revision to the two-term limit on presidential tenure, and Kamerhe conceded that ruling party efforts to amend the Constitutional term limits appear to have been scuttled. He worried, however, that Kabila may yet find other means to extend his term by delaying elections—either by setting an “unrealistic” election calendar or by insisting on the completion of a nationwide census that could take years to conduct.

In January, three dozen people were killed in anti-Kabila protests. Kamerhe suggested that such unrest may spread if citizens, and particularly DRC’s youth, continue to feel disenfranchised by Kabila’s attempts to extend power.

During the question and answer session that followed, Kamerhe, Bussa, and Badibanga underscored the importance of both the US and EU keeping pressure on Kabila to leave office in 2016.