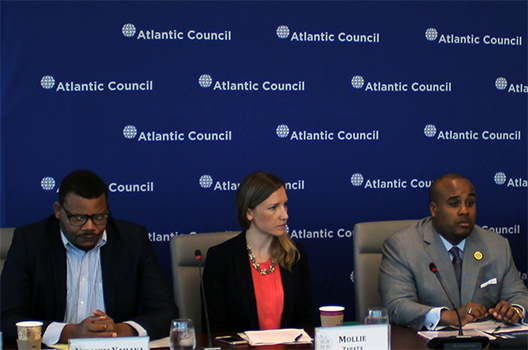 On Friday, June 8, the Atlantic Council’s Africa Center, in collaboration with the Simon-Skjodt Center for the Prevention of Genocide at the United States Holocaust Memorial Museum (USHMM), hosted a discussion on USHMM’s new report: Regions at Risk: Preventing Mass Atrocities in Mali. The event featured the report’s authors, Mr. Ibrahim Yahaya Ibrahim, early warning fellow with USHMM, and Ms. Mollie Zapata, research associate with the Simon-Skjodt Center at the USHMM, with The Honorable Karim Keïta, chairman of the National Commission for Defense, Security, and Civil Protection of the National Assembly of the Republic of Mali, responding to their presentation.

In their remarks, Ibrahim and Zapata discussed the key findings of their report, which explains the main factors behind high-risk intercommunal conflicts in Mali, plausible scenarios that could lead to an escalation in violence against civilians, and a number of recommendations to mitigate these risks. In particular, the authors underscored four key objectives, ranging from suggested improvements to the Malian state and the implementation of the Algiers Accord to improved intelligence collection and dissemination strategies.

In his response, Keïta acknowledged that Mali has been in a rebuilding phase since the 2012 coup d’état, struggling with a dearth of intelligence and inefficient, albeit improving, monitoring and evaluation of crisis areas. He stressed that the government is working hard to address the challenges of security sector reform and regain the public’s trust; however, the reform process will take time. Keïta also discussed recent strides taken to improve professionalism within the Malian Armed Forces, as well as the need to improve the effective capacity of the United Nations’ Multidimensional Integrated Stabilization Mission in Mali (MINUSMA) to respond to security threats in Mali.

A discussion, moderated by Dr. J. Peter Pham, Atlantic Council vice president and Africa Center director, followed Ibrahim, Zapata, and Keïta’s remarks, focusing on the strategic review of the UN MINUSMA and the implications of the upcoming presidential elections, scheduled for July 29, 2018, on the security situation in and around Mali.