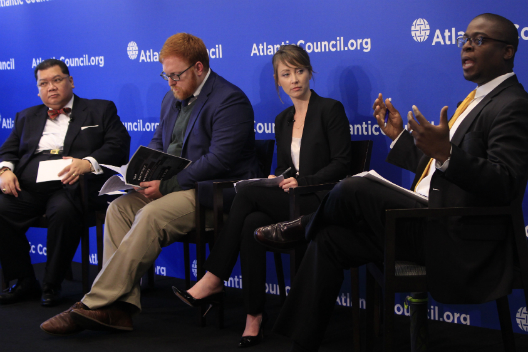 On Thursday, October 19, the Atlantic Council’s Africa Center, in collaboration with The Sentry at the Enough Project, hosted a discussion on illicit financial flows in the Democratic Republic of the Congo (DRC), occasioned by the release of the group’s new report: The Terrorist’s Treasury.

Mailey detailed the central case study of the report, which focuses on a bank in the DRC that has reportedly processed financial transactions for businesses and individuals with ties to Hezbollah. He further underscored the danger of ungoverned spaces, in which lax regulations and weak enforcement not only breeds corruption, but also recruitment and financing potential for terrorist organizations.

Dranginis discussed the report’s recommendations, which include imposing “network sanctions” that target both individuals and their financial affiliates, increasing local and international anti-money laundering measures, and enhanced banking due diligence by financial institutions in the DRC. She acknowledged that conditions that allow illicit networks to flourish do not occur in a political vacuum and, as such, domestic considerations in the DRC—as well as other African countries where illicit networks are thriving—must be part of the solution.

Fanusie commented on terrorism financing around the world, noting that in nearly all cases there is corruption and complicity at some level, which creates a cover for terror groups to launder their money through otherwise licit channels. He suggested that the most comprehensive solution might be to demand financial integrity at all levels.

In the discussion that followed, panelists examined US sanctions policy in Sub-Saharan Africa, including a move away from comprehensive sanctions to more targeted “smart sanctions.” They also discussed the link between political stability and financial integrity amid the DRC’s ongoing political and electoral crisis.

Among those in attendance were H.E. François Balumuene, Ambassador of the DRC to the United States, and Mr. Deogratias Mutombo, Governor of the Congo Central Bank, who during the question-and-answer period of the program took issue with the report, although he did not offer any specific evidence refuting the findings but promised that an investigation was underway. Also in attendance were a number of US and non-US government officials, business leaders, and civil society representatives.