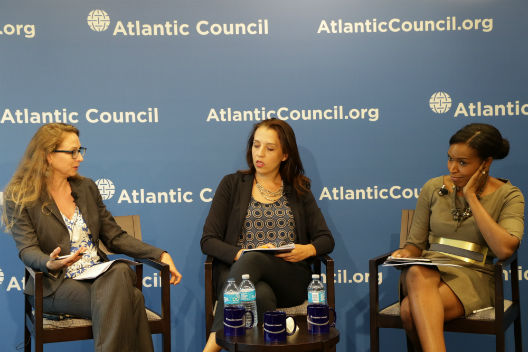 On September 7, 2017, the Atlantic Council’s Africa Center launched two new issue briefs that tackle the complexities of investing in Africa. The first, titled Escaping China’s Shadow: Finding America’s Competitive Edge in Africa, was written by senior fellow Aubrey Hruby, and the second, Capturing the African Consumer Market: Truths, Trends, and Strategies for the Road Ahead, by Aleksandra Gadzala.

In her remarks, Hruby argued that Chinese dominance in African markets does not automatically preclude US business successes on the continent. She asserted that US companies should invest in sectors where the United States has a competitive advantage, such as professional and business services, finance, and agribusiness. Additionally, the US government should do more to encourage small- and medium-sized enterprises to invest in Africa, namely through the mobilization of the Department of Commerce and Small Business Administration, larger investments in institutions such as the Export-Import Bank and the Overseas Private Investment Corporation, and movement of US-Africa investment seminars outside of the Washington, DC region.

In Capturing the African Consumer Market, Gadzala argues that the much-vaunted African “middle-class” is truly a bifurcated entity. While recent investments in Africa cater to a wealthier upper segment, Gadzala warns that there are many pitfalls in misjudging trends and spending habits of a large, lower “entry-level consumer” segment involved in the informal sector. Investors in Africa should factor this in to their calculus, as well as consider the power of mobile technology and specialized “secondary cities” outside of national capitals and metropolises.

Linda Oramasionwu, co-founder of Kupanda Capital and veteran of the emerging and frontier market spaces, joined Hruby in a discussion moderated by Bruton. Oramasionwu spoke of the diverse investment opportunities in Africa, highlighting Nigeria’s film industry, which has maintained impressive growth despite national economic woes. Hruby and Oramasionwu also took questions from the audience, which consisted of US and non-US government officials, business leaders, and civil society actors.

These issue briefs are part of a partnership between the Atlantic Council’s Africa Center and the OCP Policy Center and are made possible by generous support from the OCP Foundation.

Capturing the African Consumer Market: Truths, Trends, and Strategies for the Road Ahead is available for download here.