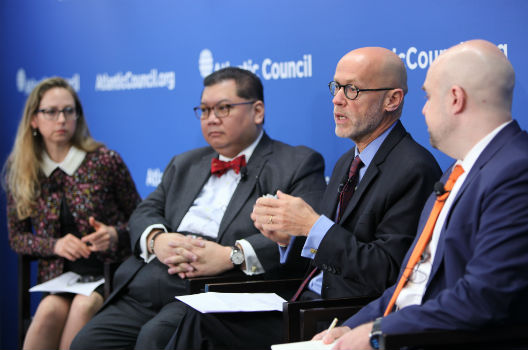 On Wednesday, January 18, in partnership with the Enough Project, the Atlantic Council’s Africa Center hosted a discussion on the political situation in the Democratic Republic of the Congo (DRC) and the impact of the recent political deal brokered by the National Episcopal Conference of the Congo (CENCO). Discussants included Atlantic Council Vice President and Africa Center Director J. Peter Pham; Pierre Englebert, professor of international affairs and politics at Pomona College, and author of Congo Blues: Scoring Kabila’s Rule; and Sasha Lezhnev, associate director for policy at the Enough Project.

Africa Center Deputy Director and Director for Research and Programs Bronwyn Bruton welcomed the audience, introduced the discussants, and, following their brief remarks, moderated the discussion.

The discussion focused on the content of the CENCO agreement, the likelihood that the agreement would be lead to a political transition in the country, what the international community, and specifically the incoming US administration, should do to encourage implementation of the agreement, and what comes next for the country if the deal were to fall through.