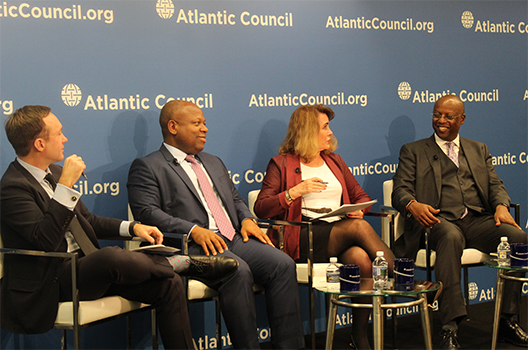 In partnership with the Energy Futures Initiative, the Atlantic Council’s Africa and Global Energy Centers hosted a discussion on November 29 on the role of natural gas in Africa’s energy future, occasioned by the release of Africa50’s new report: Investing in Natural Gas for Africans: Doing Good and Doing Well.

The event featured welcoming remarks by Amb. Richard Morningstar, founding chairman of the Global Energy Center, and keynote remarks by Sec. Ernest Moniz, former US Secretary of Energy and president and chief executive officer of the Energy Futures Initiative, Mr. Alain Ebobissé, chief executive officer of Africa50, and Ms. Melanie Kenderdine, senior fellow with the Global Energy Center. A panel discussion, moderated by Mr. Randolph Bell, director of the Global Energy Center, and featuring Ebobissé, Kenderdine, and Mr. Andrew Kamau, principal secretary of the State Department of Petroleum of the Ministry of Energy and Petroleum of the Republic of Kenya, followed.

In his remarks, Sec. Moniz argued that natural gas should be at the center of Africa’s energy development. He stressed the need for an “all-of-the-above” policy, whereby governments use every tool available to diversify their respective energy mixes, increase power generation, and reduce carbon emissions. Sec. Moniz highlighted the US example of this approach, in which widespread adoption of natural gas, coupled with renewables, has drastically reduced the carbon footprint while maintaining sufficient energy supplies. In Africa, which generates approximately 45 percent of its power from coal and oil, vast new discoveries of natural gas in Mozambique, Senegal, and beyond could fuel a similar energy revolution.

Mr. Ebobissé presented Africa50’s report, discussing the ways in which the infrastructure fund is supporting the development of Africa’s natural gas resources to help countries produce clean power, industrialize, and provide affordable energy to households across the continent. He stressed that there is a strong consensus in Africa that natural gas adoption will fuel development and pay dividends well beyond the power sector. However, he acknowledged that limited midstream and downstream transmission infrastructure are still major hurdles to adopting natural gas on the continent. If this infrastructure can be developed, he argued, demand will increase, and Africa’s energy sector will become more competitive at a global level.

Ms. Kenderdine subsequently underscored the value of natural gas to Africa’s development, laying out different scenarios for countries to develop their natural gas infrastructure using imported or indigenous supplies. She also stated that Africa needed to find ways to monetize the more than $1 trillion in natural gas that is flared or stranded, presenting possible solutions such as airborne virtual pipelines and modular plants.

In the ensuing discussion, Mr. Kamau concurred with the other panelists, explaining how Kenya is integrating natural gas into its energy policy. He spoke of natural gas’ ability to support many other sectors, from powering technology in schools to supporting the manufacturing of cement to address the country’s housing shortage. Panelists also discussed efforts to attract infrastructure investments and the role of organizations like Africa50 in accelerating project development and implementation.