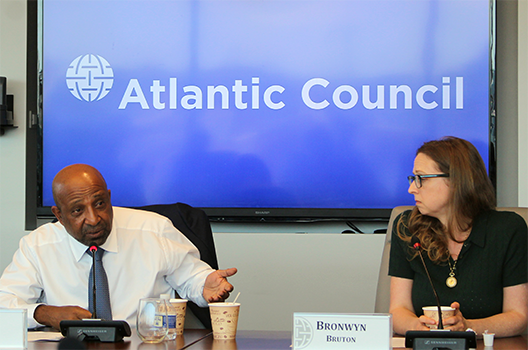 Dr. Berhanu summarized the current situation in Ethiopia as one of hope and anxiety. He claimed many Ethiopians remain optimistic that a real transition to democracy is possible, but also cautioned against the impatience of the youth population for sweeping immediate change, characterizing the popular intent as “revolution” rather than “reform.” He also spoke extensively about the challenges involved in staging credible elections by May 2020, describing the difficulties of resolving ethnic-based conflicts and tribal alliances without constitutional reform. Dr. Berhanu noted that the ECSJ is the first political party to not be constituted on ethnic lines with representation in almost all of Ethiopia’s 547 constituencies.

Ms. Bronwyn Bruton, Africa Center director of programs and studies and deputy director, moderated the ensuing discussion, during which participants engaged Dr. Berhanu on the role of outside mediators in Ethiopia’s political reform process, the status of conflict- and drought-IDPs, and Ethiopians’ perception of Prime Minister Abiy Ahmed.