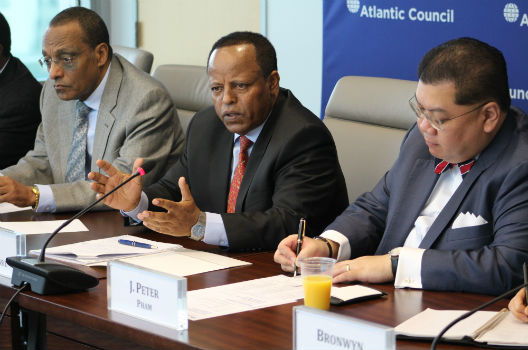 Taye discussed the sustained protests that have taken place across Ethiopia for more than a year, as well as the recently imposed state of emergency. He acknowledged what he described as the five principal grievances motivating the demonstrations: the lack of an inclusive political process; questions over regional power decentralization and “self-administration”; unfulfilled demand for services and infrastructure at the local level; rising unemployment, particularly for Ethiopian youth; and the limited ability of the Ethiopian government to “harness” the demographic dividend.

In response to the ongoing unrest, which has resulted in the death of hundreds of protestors, an unknown number of security forces, and millions of dollars in property damage, Taye noted that the government felt it had no choice but to implement a six-month state of emergency, which he specifically noted was not intended to be punitive. He noted the following factors in the decision to impose the state of emergency: “destructive elements” have usurped the legitimate grievances of protesters; demonstrations have led to significant damage to both public and private property; the need to restore security and stability, especially in the rural areas; the need to prevent armed groups from unleashing a “coordinated” campaign under the guise of the demonstrations; the need to end violent incitement of inter-religious and inter-ethnic conflict; and to eliminate the “strong evidence” foreign involvement in the unrest.

Taye also stated that the government would be initiating a national political dialogue aimed at addressing some of the issues behind the unrest and promised it would be inclusive.

Also in attendance was His Excellency Girma Birru, ambassador of the Federal Democratic Republic of Ethiopia to the United States, Ambassador Tebege Berhe, director-general for the Americas at the Ethiopian Ministry of Foreign Affairs and various current and former US government officials and representatives of civil society.